By Baker HeltonFebruary 20, 2021No Comments

The top disc golfers were back in action with the start of All-Star Weekend on Saturday. The top 8 men and women in the world battled in a doubles format on a safari course at Fountain Hills Disc Golf. The first nine holes used a “best shot” format, while the second loop used a “tough shot” format.

During the first nine holes, the best shot format allowed the competitors opportunities to be more aggressive and allowed for some highlight-reel shots.

There was little separation to be had between the teams after the first loop of nine holes. The second loop offered less scoring opportunities and rewarded consistent play.

On the women’s side, Catrina Allen and Kona Panis led the way with solid play that gave them the commanding lead, finishing 5-under on the day.

The All-Stars will keep their scores going into Sunday’s singles round, meaning that the teammates will now be pitted against each other. Paige Pierce and Heather Young will join Allen and Panis on the lead card and will be 7 strokes behind after shooting 2-over par.

The top 6 men are deadlocked going into Sunday with 3 teams, Paul/James, Calvin/Garrett, and Eagle/Chris, each finishing the day 4-under. Ricky Wysocki and Kevin Jones struggled during the “tough shot” portion of the day and will be 4 strokes behind after finishing even par.

The final day of All-Star weekend begins Sunday at 1:00 PM ET tomorrow. Scores and stats are available via UDisc Live and the broadcast can be seen live only on Disc Golf Network. 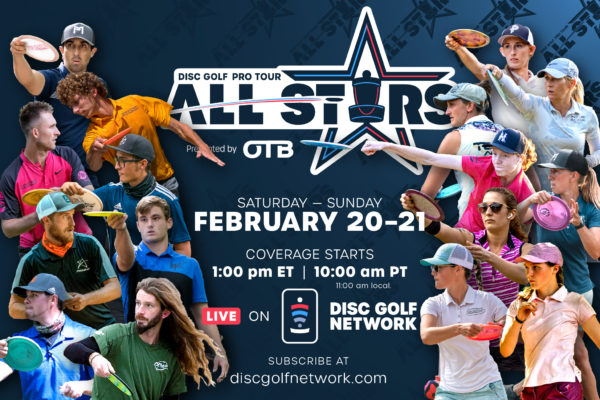