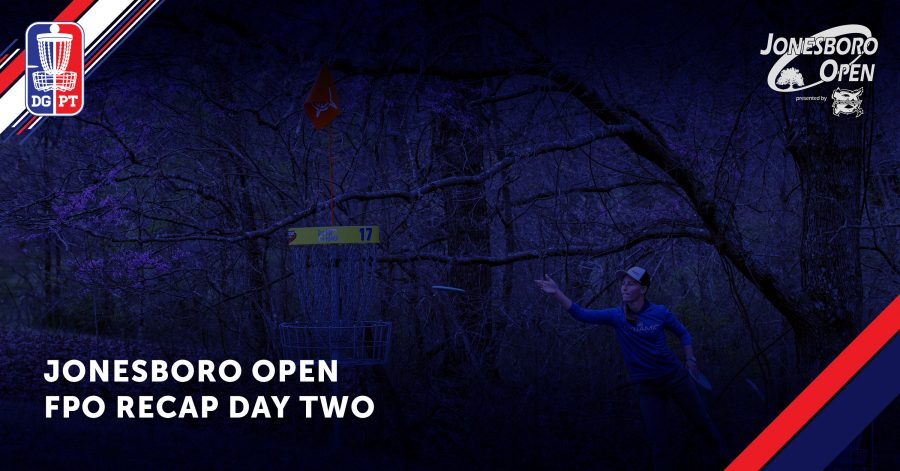 JBO FPO Round 2 Recap: Pierce Maintains Lead After Tough Conditions for the Field

Disc golf in the spring is supposed to be warm and sunny in Arkansas but on Saturday morning, snow was falling from the sky and brisk temperatures in the 30s combined
with 15 mph winds led to a tough second round for the Jonesboro Open presented by Prodiscus. Paige Pierce’s strong 12-under par performance from yesterday proved extremely valuable as her seven-stroke cushion going into round two helped keep her in front after a tough Saturday.
When the snow stopped falling and the round finished, Pierce maintained her first place standing with a six-stroke lead. While her 4-over par 70 performance was 16 shots worse than yesterday, Pierce was still able to maintain her large lead as the rest of the field also struggled in the tough conditions. Madison Walker started the day in second place after a 5-under par first round but with the wind and snow, Walker struggled and had three double bogies en route to a 7-over par 73 round that moved her down three spots on the leaderboard and into fifth place. Walker wasn’t the only one to struggle. Kona Panis went into the day in fifth place after an impressive 3-under par performance in round one but round two conditions proved to be too much for Panis who went 18-over on the day to drop five spots into 10th. Conditions were so tough that a 7-over par by Jessica Weese actually moved her up three spots and into sixth place.
The better performances of the day came from the seasoned professionals that we have come to expect to perform well in all conditions. Catrina Allen shot the hot round with a 2-over par to push herself into second place and sixth stokes behind Pierce. Sarah Hokom shot one stroke worse than Allen and sits in third place at 1-over for the event. Down the leaderboard, Ellen Widboom put together an impressive 4-over par 70 round. She now sits in ninth place.
With conditions expected to improve tomorrow, the competitors will look to improve on their second-round scores. Will anyone be able to challenge Paige Pierce or will she walk to another Disc Golf Pro Tour victory? Be sure to tune into the DGPT YouTube channel at 4:00 ET today and tomorrow to see how it played out.