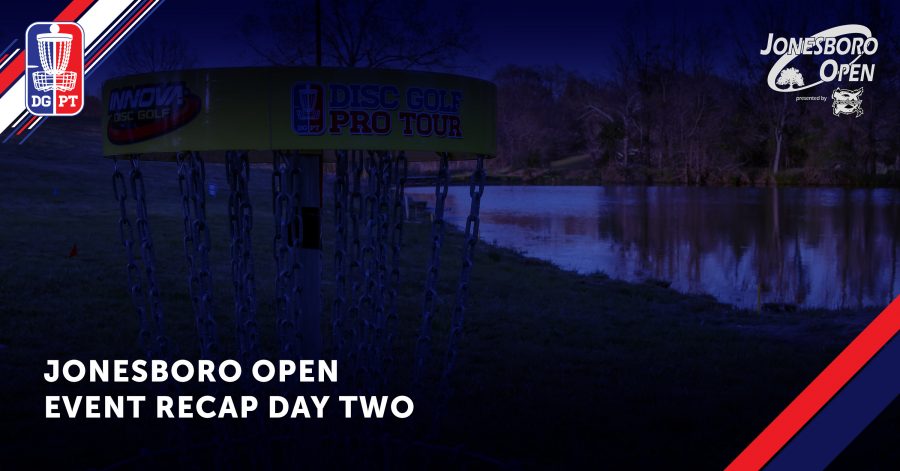 Eagles, Birdies, and Bogeys from JBO Round Two

The Jonesboro Open presented by Prodiscus continued on Saturday with players dealing with frigid temperatures including snow early in the day. Here are the noteworthy ​
moments from round two at the Disc Side of Heaven course.
Birdies:
Windy conditions took many of the eagle opportunities away from the competitors but plenty of players still found ways to score under par. Several players had important birdie streaks to propel them up the leaderboard. Garrett Gurthie birdied five holes in row, getting holes 12 through 16 to bounce back from a slow start and to finish the day in second place with an event total of 20-under par and two strokes behind Wysocki’s lead.
With snow falling from the sky, the story on the FPO side was the lack of birdies. Birdies were extremally hard to come by in round two but Jennifer Allen did have a birdie streak on holes 14 through 17 to propel her to a 3-over par performance as she jumped two spots into fourth.
Bogies:
The conditions made big numbers a common place for round two and on the women’s side, a number of players had trouble holes that hurt their efforts. Paige Pierce and Sarah Hokom both had triple bogeys on the day. Pierce three-putted hole eight en route to the six on the par three. Luckily for Paige, she had strokes to give away and she still sits six strokes ahead of second place. Paige Pierce’s lead may have shrunk if it wasn’t for a triple bogey on hole five for Hokom. Hokom is in third place and seven strokes out of the lead.
Eagle McMahon started the day slow but he was clawing his way back into the race for first through the first 15 holes. On hole 16, Eagle went for the eagle and threw his second shot just short and into the pond. After getting his shot from the drop zone into the circle, Eagle missed a short putt for par. Eagle’s bogey on 16 was a momentum shift as Eagle had to scramble for par on 17 and then bogeyed 18. Eagle finished the round 4-under par and is now in 8th place.
The Jonesboro Open presented by Prodiscus concluds tomorrow. Tune into the live broadcast at 4:15 ET to see how the tournament includes.