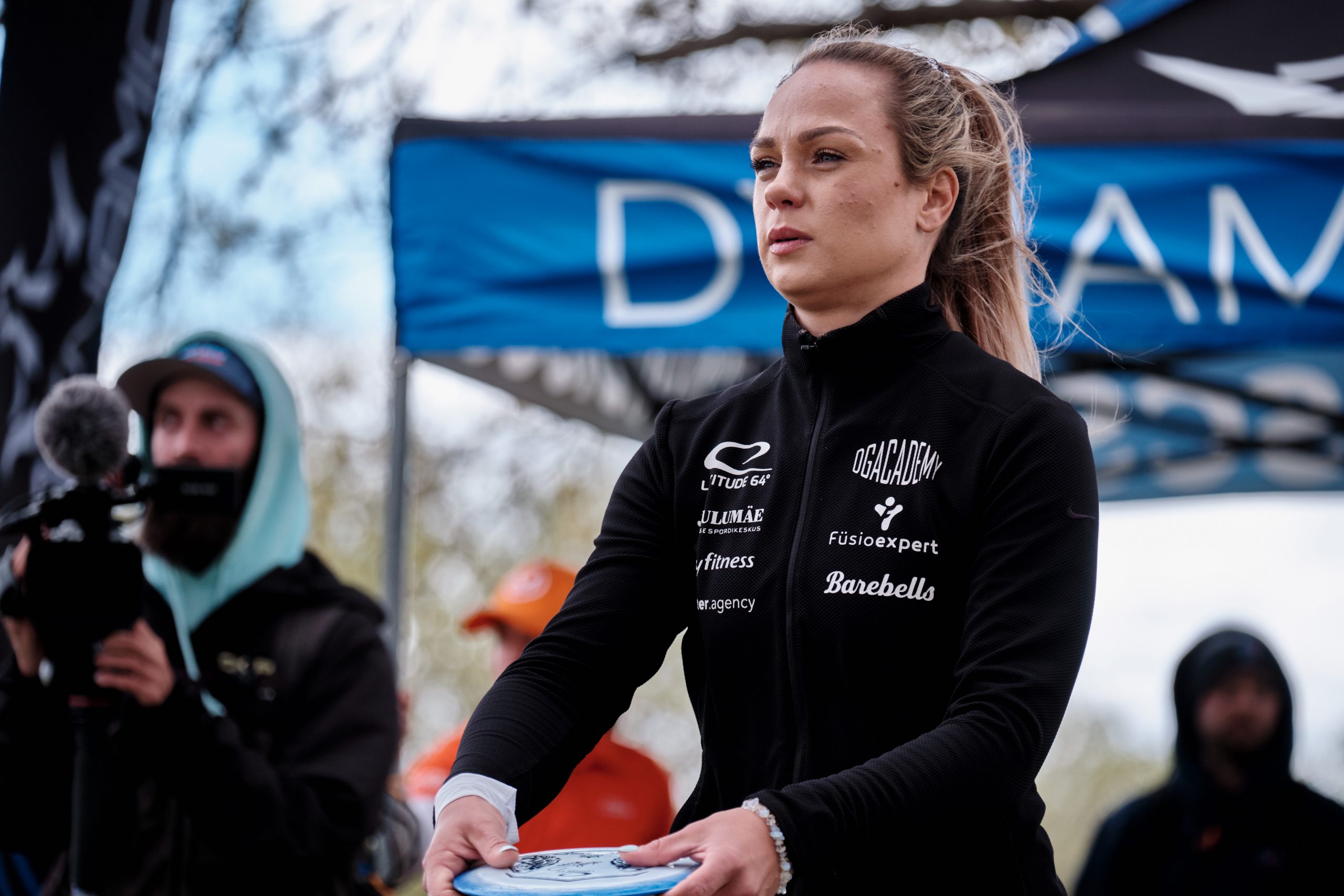 By Baker HeltonMay 1, 2022No Comments

Ricky Wysocki spent the morning practicing his layups. Kristin Tattar was playing for par. Brodie Smith was having fun. Paul McBeth won’t be around for the final round.

Safe to say, it was a wild one in Emporia, Kansas on moving day of the 2022 Disc Golf Pro Tour – Dynamic Discs Open.

“The wind was a big factor and at times I wasn’t sure what my discs were going to do,” said Tattar, who pulled away for a four-stroke lead heading into Championship Sunday. “It was tough, but I think I handled it well.

“All of us have the expectations and if you don’t meet them, it’s easy to get frustrated. I tried to lower them but as an athlete, you always want the best. I tried to go very safe on some of the holes, go for par and don’t go crazy.”

For the third-straight day, and easily the wildest at what has been a crazy tournament, the winds moved in as action shifted to the Emporia Country Club.

They didn’t relent all day.

“The wind was absolutely ripping,” Wysocki said. “I laid up a couple of putts inside the circle today because the chances were that I was going to miss, which is weird because you don’t practice laying up from 30 feet.

“For me, I went into the day knowing that the six or seven under round wasn’t a possibility, so I was playing for par.”

When the wild leaderboard finally settled, Wysocki found himself with a four-stroke lead heading into the final round back at ECC. Jake Hebenheimer and Brodie Smith are 1-under for the event and Logan Harpool rounds out the lead card at even par through 54 holes.

“It was really, really tough out there today,” Smith said. “There were a ton of bad breaks with the wind. People were missing putts from 10 or 15 feet, a lot of skips that went out of bounds.

“This is fun. It’s fun when you’re having to grind every single hole. I had a lot of fun out there.”

In total, there were two rounds total in the 166-player DGPT field under par: Ella Hansen jumped 19 spots to the chase card in FPO with a 1-under finish and Jeremy Koling rose 34 spots with a 3-under day into a tie for eighth. Koling’s round was aided by an ace on the iconic 16th island hole.

For the first time in his career, McBeth missed the cut for Sunday’s final round and finishes his tournament at 16 over par, one stroke off the cash line.

Catrina Allen followed with the second-hottest round of the day in FPO at even and jumped 14 spots into second place, four strokes back of Tattar. Emily Beach and Valerie Mandujano round out the lead card at plus-9 and plus-10, respectively.

“Just trying to make the wind my friend,” Allen said. “Something that Austin (Hannum) told me, if you’re not in position and the wind isn’t helping, don’t force the birdie, get the par. That was on my mind today.”

Sunday’s forecast calls for the calmest day of the week by far, which will open the ECC up to lower scores and a mad dash to the finish line, but now instead of adjusting to the crazy winds, the players will have to adjust back to normal.

“It’s going to be weird because it was so windy in Jonesboro and so windy here and it’s time to learn how they fly without the wind,” Wysocki said. “It’s going to be fun to attack tomorrow. I have a four stroke lead, but I’m still going to be aggressive and grab every birdie I can.”