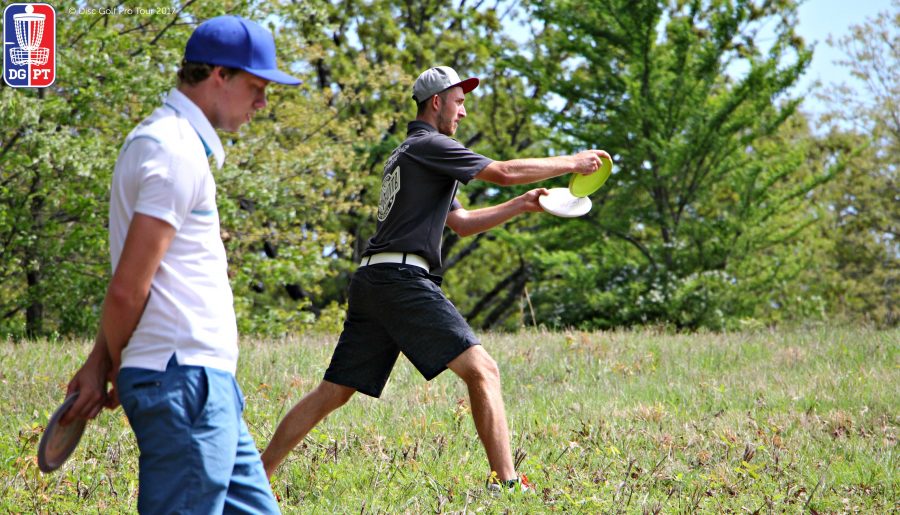 Wysocki Makes it Interesting but Holds on: Jonesboro Open MPO Final Round

Ricky Wysocki came into the final round of the Jonesboro Open with a nine stroke lead. It looked like he would be using Easter Sunday as a victory lap at the Inaugural ​
Spartan Mowers / R&R Equipment Jonesboro Open presented by Prodiscus. After a slow start made things interesting, Wysocki’s 2-under par, 62 was good enough to hold off a streaking Simon Lizotte who shot a 9-under par, 55. Overall, Wysocki finished the tournament at 37-under par, two strokes ahead of Simon Lizotte at 35-under. The hot round of the day belonged to Nikko Locastro who shot an 11-under par, 53 to move up four spots and finish in third place at 32-under.
Wysocki started the day with a bogie and struggled to get any momentum following that. On the front nine, Ricky shot a 1-under, carding three birdies to counter his two bogies. Ricky started off his back nine hot, marking down birdies on both 10 and 11, but he proceeded to give those strokes right back with bogies on 12 and 13.
The pivotal moment in the round came on the 855 foot par 5, hole 16. Simon had pulled within three strokes of Ricky and had a look at an eagle three to gain another stroke on the leader. Lizotte air balled his putt and the proceeded to miss two more putts to four putt on the hole. With a Wysocki birdie, the three stroke swing put it out of reach for Lizotte and allowed Ricky to walk away with the victory.
Ricky recapped the round, “Days like today it’s all about fighting through and when the momentum is fighting against you, you just have to do what you can to salvage the round… I’m proud of myself for fighting through.”
This victory puts Ricky Wysocki in first place in tour points, with 324. Simon Lizotte is right behind him, at 322. When asked about the importance of tour points Ricky said, “I’m glad to capitalize on this tournament… I’m glad to be building my momentum in the right direction and it feels great to take the lead in the pro tour points,” Wysocki said. “I’m going to be bearing down and focusing the rest of the tournaments to try and accomplish the goal and try to win it by the end of the year and get ready for the tour finale.”
The Disc Golf Pro Tour will take a small break before moving onto the Utah Open June 1-3 in Ogden, Utah. Be sure to tune in as the world’s best disc golfers battle for tour points and try to make a run at the title and qualifying for the Tour Championship.