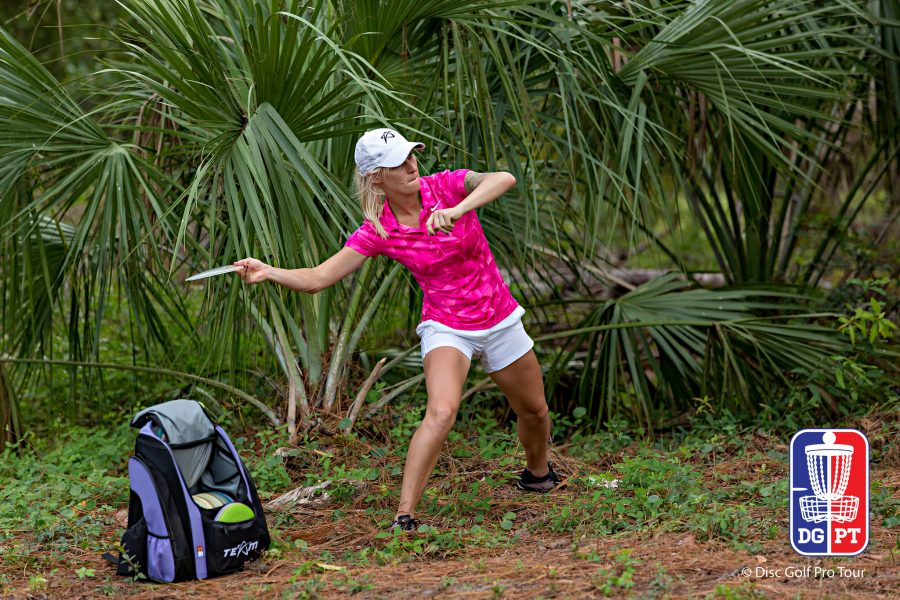 Women Semifinal Saturday Recap: Hang on to your nails

First hole of the Semifinals. Sarah Hokom hucks in a 60 footer for birdie. Yeah, she came to play. It was Semifinals Saturday and there was an air of anticipation in the air. Lisa
Fajkus commented that the play today was much more stressful than the Quarters on Friday. Win or go home was not just a cute slogan.
Catrina Allen came out blazing, driving just inside circle 1 and drains the putt. Time to play. She won the Hall of Fame last weekend and continued her stellar play, shooting 4 down, the hot women’s round so far.
The card that thrilled us the most was the Pierce / Fajkus matchup. Thru seven holes, Lisa Fajkus of Round Rock, TX had built up a three stroke lead over fellow Texan Paige Pierce (Plano, TX). As happened on the men’s side, hole 8 would prove to be critical. While the women play from a shorter tee, Paige’s birdie on hole 8 would stand the test of time and is the only birdie on the hole so far, men or women. And it bested Fajkus by three, tying things up in a hurry. The two would trade blows with Fajkus gaining a stroke on holes 9 and 16 and Pierce picking up two on hole 10. On hole 18, Paige Pierce would finally pick up the one stroke that mattered the most, beating Fajkus by one and securing her spot in the Finals.
Lisa Fajkus was left to hope her score would hold up. While Sarah Hokom and Catrina Allen had their cards pretty well secured, Jessica Weese and Melody Waibel had an opportunity to tie Lisa for the wildcard spot. Thru nine holes, Weese was 3 over par. Fajkus was in the clubhouse with a one under. On holes 13 and 14, she would utilize park jobs to secure the birdie and the opportunity was there. A bogey on 16 would end her run.
Meanwhile, Waibel was playing par golf through the first 15 holes. Two birdies, two bogeys and 11 pars. Steady as she goes. On the last three holes she needed to card a birdie to tie Fajkus. Instead, missed C1 putts on holes 16 and 17 resulted in two more bogeys down the stretch and Lisa Fajkus had secured her spot in the Finals via the Wildcard birth.