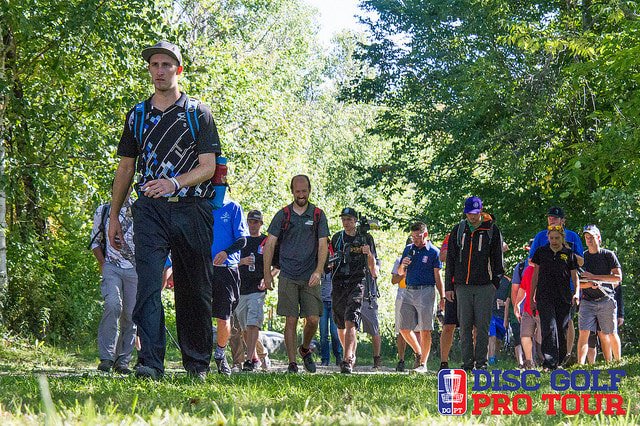 Will we see a 5x GMC Champion?

This week we embark on the final regular season stop of the 2017 Disc Golf Pro Tour. Just as last year, Discraft’s Green Mountain Championship at the beautiful
Smuggler’s Notch Resort will be home to the final stop. The Green Mountain Championship is in its fifth year and has the unique distinction of having the same MPO champion for the first four years. Which leads us to ask: will we see a 5x GMC Champion?
In order to answer this question we need to consider a few of the top players in the field and where they land in the mix of competitors playing in the 2017 Green Mountain Championship.
Out of the gate is Bradley Williams. Bradley is a player who we have not seen since last year at this event. Bradley was handed an eighteen month suspension by the PDGA a little over a year ago . Week before last the PDGA announced it would be reducing his suspension to a year, making Bradley eligible to compete in PDGA events this past weekend. Bradley was able to secure a win in a playoff this weekend at the Greater Hartford Open. Based on Bradley’s solid performance last year and his resilience in his first event back, he will be a player to watch this weekend. If Bradley were able to secure the win this weekend he would be qualified for the Pro Tour Championship.
Another key player to watch this weekend will be Nate Doss. Nate has not been as active on tour this year as he has been in years past. As such, Nate is on the bubble for a bye to quarterfinals. If Nate follows his 2016 top ten finish, and his 2015 second place finish at the GMC, this weekend then he will easily secure his bye into the quarterfinals of the championship. However, this weekend is about more than just the setup for the finals. Nate is a player who could easily pull off a win any weekend and will be one you want to watch to be gunning for the lead card after day one.
Michael Johansen is looking to make a move this weekend as well in the Pro Tour Standings. A solid finish for Johansen this weekend would secure him a bye into the quarterfinals of the Pro Tour Championship. He should have no problem securing that bye should he follow-up his second place performance from last year with the same caliber of play.
Two guys who would really benefit from a top five finish this weekend (or even first for that matter) would be Nikko Locastro and Austin Turner. Both of these guys have a shot at a bye into the semi-finals of the tournament. Austin could ride his first place Nantucket finish (and final round ace!) to propel him into a spot on the leader card at the GMC this weekend. For Nikko he has the experience of being on the lead card at the GMC last year and is a guy we expect to see on a lead card at anytime during a tournament. For both of these guys there is more than just the GMC on the line and that could be a blessing or a curse this weekend.
Ultimately though, it would not be a battle without Paul and Ricky. Paul McBeth finished T4 at the GMC last year and even with a first place finish this weekend he would not be able to upend Ricky’s hold on as the Tour Points Champion. We can expect Paul to play his traditional game and without the pressures of Tour Point Standings we could see McBeth card some extraordinary rounds this weekend.
Just because Ricky is already the 2017 Tour Points Champion does not mean he is going to back down this weekend. Ricky has one thing that no other competitor has at the Green Mountain Championship (no it’s not momentum). Ricky is the 4x GMC champion. With his Tour Points title in the bag, Ricky is set to try and cruise to a fifth GMC title.
These are just a few of the players who are in the running to be the 2017 Discraft Green Mountain Champion. There are a host of players who could ultimately come out on top which were not mentioned (Nate Sexton, Simon Lizotte, Eagle McMahon, and Paul Ulibarri to name a few) however, the best way to see who is going to take it down is to follow along live this weekend!
We will be live at http://dgpt.com/watch/live on Thursday, Friday, and Saturday starting at 2:30pm ET. On Wednesday you can tune in to our instagram story for updates of the MPO rounds.
​