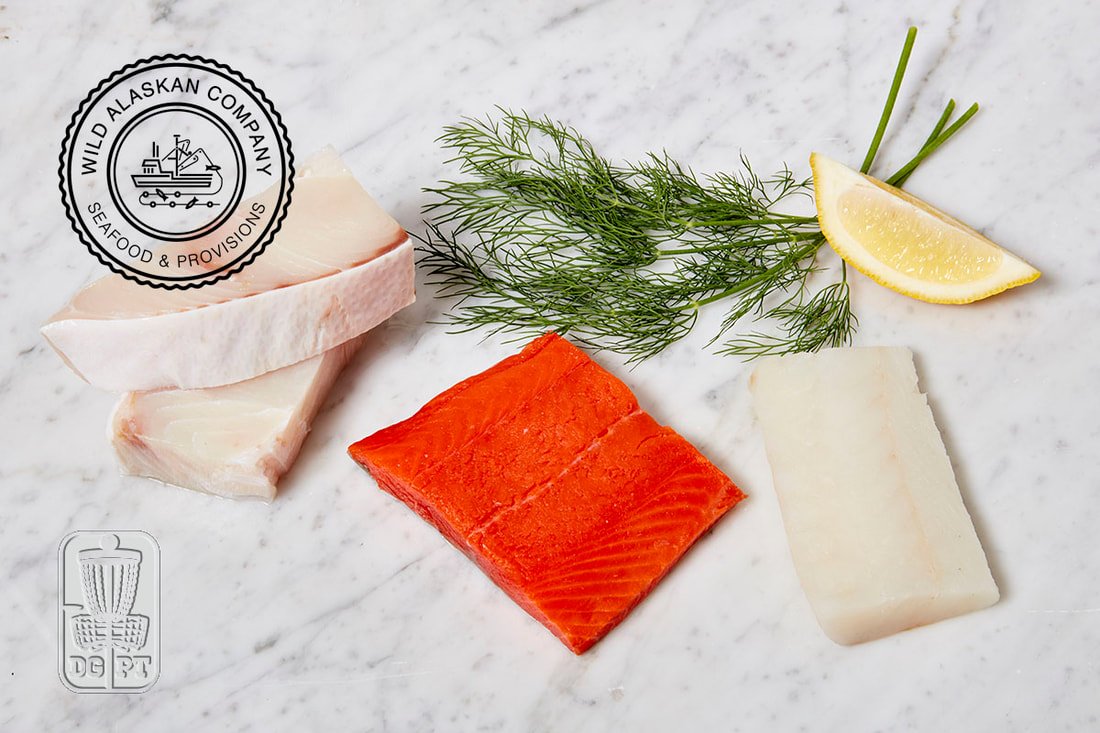 The Disc Golf Pro Tour and Wild Alaskan Company are proud to announce their new partnership. The Wild Alaskan Company, a sustainably sourced seafood delivery service, will be the presenting partner of the Ledgestone Live Broadcast. Thanks to this partnership, the live broadcast will be available on all of our now standard outlets, including YouTube , Roku , Fire TV, Apple TV and the Disc Golf Network website.

$50 DGPT Gift Certificates
As part of the partnership, everyone that signs up for the service will receive a $50 DGPT Gift Certificate . The Pro Tour is offering this incentive to encourage people to eat healthy and support companies that invest in sustaining the planet for future generations. The mission of Wild Alaskan Company is to steward the relationship between sustainable seafood and people. Their mission is driven by the prospect of service – to consumers, to fish, to fishermen and fisherwomen, to the planet and to the oneness of the whole system.

Sign Up Today
You can sign up for their seafood delivery service today and eat healthy, support sustainability, and have it delivered in ready to eat portions to your door each month. Help us get this partnership off to a great start. Here are the various species that Wild Alaskan Company offers.

Sockeye Salmon. Sockeye (which is predominantly sourced from Bristol Bay in Alaska, and occasionally from the Salish Sea in Washington State) is known for its robust flavor and intense deep coral color. Sockeye is known as the “healthy eater” of the salmon family, as it primarily feeds on krill and plankton — giving it that signature coral color and dense texture.

Coho Salmon. Coho, also known as silver salmon, and which is also sourced from Bristol Bay and other parts of Alaska, is an easy fish to work with and has a slightly milder in taste than sockeye. Coho has more variety in its diet than sockeye salmon (since it also eats small fish), so it can be more pale in color and also grows larger in size.

Alaska Halibut. Halibut is the world’s largest flatfish: a lean species with mild, sweet tasting white flesh, large flakes and a firm but tender texture. People tend to love the “steaky” quality of the fish. Halibut fisheries are some of the most tightly controlled in the world, ensuring long-term sustainability and leading to higher prices than most species of fish harvested in Alaska and the Pacific Northwest. Wild Alaskan’s CEO/Founder’s hometown — Homer, Alaska — is known as “the halibut capital of the world.”

Pacific Cod. Cod has a mild, clean, lightly sweet flavor, and the tender, flaky fish and takes on the flavors of the seasoning and sauce it is cooked in. Cod behaves beautifully with sauces and marinades and is perfect for tacos and beer battering.

** A bit more about salmon: Alaskan salmon are born in mountain lakes and streams, migrate via river systems to the ocean where they spend their life, journey back to where they were born and eventually spawn and die. But with said journey comes a certain phenomenology and beautiful mystery around the fish, an ancient and primal wisdom rooted in the distinct connectedness that salmon have to their particular environment.

Wild Alaskan likes to think of salmon in the way that winemakers talk about terroir , because — like grapes in relation to the earth on which they grow — the physiology of salmon is influenced by the specific river system in which they are born. The fat content of a particular fish, for example, is largely dictated by the nature of the journey it needs to make back upriver before it can spawn and die ; and these rivers can range from mild, shallow journeys to very difficult journeys, where the salmon must fight elements such as rocks, rapids and bears.

So, the physiology of each fish is somehow smart enough to know that it needs to have a higher or lower fat content (and thus eat more or less) while it’s at sea so that it survives this very distinct and always epic journey. This creates quite a difference of variation even within a single species (and there are five different species of salmon that call Alaska home) — nuances that change not only the life cycle of the salmon, but also the culinary experience of the fish.

In this way, salmon really is a sort of lifeblood of its various environments because throughout its multifaceted migration pattern, it picks up its own nutrients from fresh and salt waters, and in turn feeds bears, whales and humans alike — a living circulatory organism that nourishes so many other creatures, acting not only as a bridge to many ecosystems, but also as a great balance-keeper of an ever-changing flow.

Species Occasionally Offered:
Rockfish. Rockfish, which is sourced near Kodiak (a large Alaskan island) is a versatile white fish that is known to have a mild, nutty flavor and medium-firm texture. It’s perfect for recipes that don’t call for any specific type of fish. Because of it’s firm yet flaky texture and adaptable flavor profile, Alaskan rockfish is a favorite in all varieties of cuisines. There are about 37 different species of rockfish in Alaska, but only three species that are commercially available.

Wild Alaska Pollock (coming soon). This species is mild, tender and flakey and one of the most versatile fish out there. And in terms of sustainability, this species is an all-star. This fish is naturally abundant year-round in the North Pacific Ocean, specifically in the icy waters of Alaska.