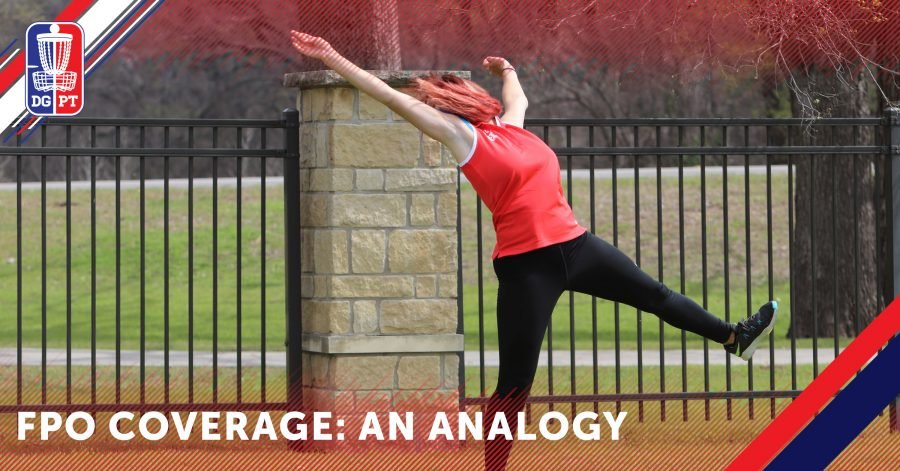 Why we need FPO Coverage: A gymnastics analogy

*The following analogy was submitted by David Moser as an approach to considering FPO Coverage in our sport. We wholeheartedly agree and have worked with the San
Francisco Open to continue to expand women’s coverage . Be watching for other updates regarding our continued and expanding support of FPO coverage in the upcoming weeks! Steve, you asked Addie how we would feel if ESPN came to the sport of disc golf and said they’d like to try covering the sport but only the women’s field until the coverage proved successful. Gender flipping the question is a clever way to look at it but if we do that we need a more accurate flip.
Instead suppose ESPN came to the governing body of gymnastics and said, “People liked watching gymnastics during the Olympics, so we are going to put it on our channel on Saturday afternoons.”
Now, you have a twelve year old son who fell in love with gymnastics during the last Olympics. He was enamored by the strength and balance of the guys on the pommel horse and the rings and the horizontal bars and the parkour-esqe floor exercise. He talked you into paying for gymnastics lessons and has been attending for a few weeks now. Saturday you two sit down to watch ESPN and you watch the ladies perform the vault, spin around the uneven bars, and dance across the balance beam and then the show is over. No pommel horse, no rings, no parallel bars, no men at all. Your son was so excited to watch what was possible for others like him, but his division of the sport was ignored entirely. You do some research and find that ESPN decided that the risk of covering gymnastics at all was fairly high so they only wanted to cover the most popular division until they see if it succeeds.
That night you ask your son if he’s ready to go to gymnastics practice and instead of being excited as usual and motivated by watching other men perform at the highest levels he just says, “I guess.”
Next week at school he’s with a group of friends and he mentions gymnastics practice. The other boys visualize the only kind of gymnastics they have seen, girls jumping around in leotards. They tease him about it and he would like to say, “No, no, it’s really awesome, just watch the guys on ESPN on Saturday.” but he can’t, they aren’t filmed. He gets teased about wearing a leotard with the girls all week and when it’s time to go to practice he says in a small voice,
“I don’t wanna go anymore.”
Now, bring it back around to disc golf. A young woman is with her friends and mentions disc golf. They look at her funny but she pulls out her iPad and shows them Paige throwing a 550 foot crush over water then hitting one of those crazy 60 foot jump putts. She shows them Catrina laying down a sick roller that curls up around the basket. She shows them Sarah throwing a flex forehand between two trees and around another one to park the hole for a birdie. Those girls are all like, “Wow!” and at least one of them says, “I gotta try this!”.
Suppose women’s coverage doesn’t exist and so she has to show them those same shots being thrown by Simon, Paul and Nikko. Those girls still say, “Wow!” but not one of them pictures themselves doing the same thing. The Annika Sorenstam of disc golf might have been in that conversation but she’ll never pick up a disc because that’s just another example of guys doing crazy athletic guy things that women can’t do.
But they can do those things and if we cannot show them it will be a real shame and a loss for the sport.
We recognize the economics and logistics of filming FPO are the biggest challenge, we believe the desire to cover the women is there. I just think it’s important to provide good examples of why it is important so the motivation to do so doesn’t wither and have FPO coverage and participation left behind.