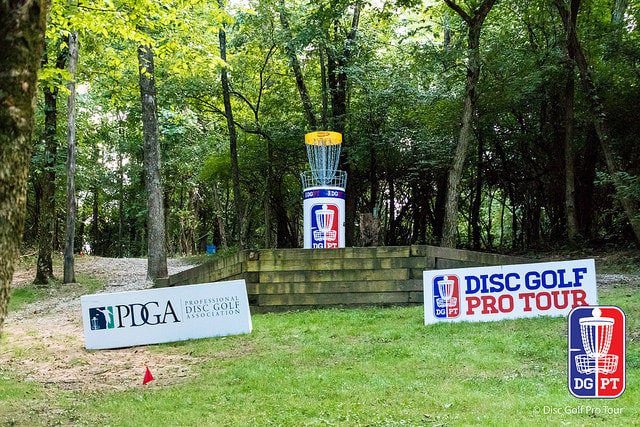 The Idlewild Open driven by Innova and the Nati began on Thursday with the women battling the tough Idlewild course. Usual names appeared on the leaderboard with an
increasingly common name landing in the top spot. After a first and second place finish in her last two Pro Tour stops, Jessica Weese, currently holds the early lead in Idlewild after shooting a 4-over par, 70. She is followed by Sarah Hokom (+6), Lisa Fajkus (+7), and Paige Pierce (+8).
The Idlewild course proved to be quite the challenge for the top female competitors with birdies hard to come by and scores over par quite common. Jessica Weese was able to handle the roller coaster ride the best, carding two birdies along with four bogeys and one double bogey. It wasn’t as if Weese was going out of bounds either, she only carded one on the day, this course is just tough. The toughness of the course can be seen in her circle one and circle two hits. The leader was only in circle one in regulation a meager 11 percent of the time and in circle two 33 percent of the time. Meaning, most of Weese and her other competitor’s putts were for par. Jessica capitalized on 89% of her circle one putts and added one circle two putt to her resume on hole five when she hit a huge 60-foot putt for birdie.
For many of the other competitors, big numbers were the story of the day. Sarah Hokom carded a triple bogey, Fajkus a double bogey, Piercen had two doubles and a triple, and Catrina Allen had two triples and a double. The competitors will look to improve on those big numbers tomorrow and improve their scores.
The competition will continue on Friday with the second day of the three-day event. Be sure to stay tuned to the Disc Golf Pro Tour to see how the action unfolds.