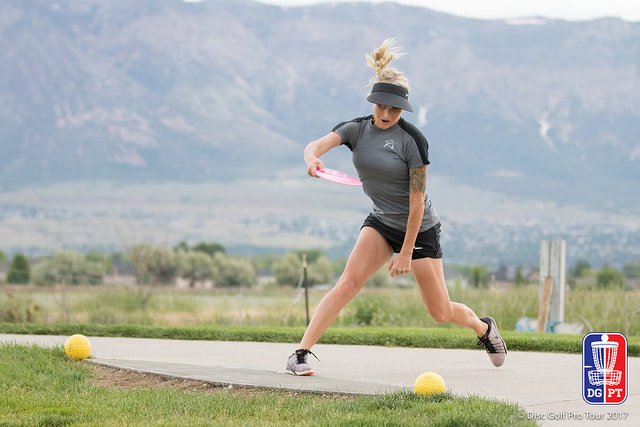 Catrina Allen and Jessica Weese continued their tight battle atop of the leaderboard at the Utah Open presented by Latitude 64. After co-leader Paige Pierce left the ​
tournament with a family emergency, it was Weese and Allen left, tied for first going into the event’s second round. The two continued to battle throughout Friday’s round and both improved on their 5-over score from yesterday, shooting a 3-over par, 61 to put both of them at 8-over par for the tournament.
Catrina Allen knew that she needed to stay in between the lines in order to improve on her score from the previous round. Allen had a field-leading seven out-of-bounds penalties in Thursday’s round, but she was able to improve on this by only taking three O.B. penalties on Friday. One of these O.B. penalties proved costly as she took a triple-bogey six on hole eight. Aside from hole eight, Allen shot “par golf,” carding three birdies to counter her three bogies. Allen’s circle 1 putting diminished on Friday, but after having a day to navigate the course, she improved off the tee. She found 67% of fairways today and is now first in the field in that category after round two.
Catrina Allen’s Stats After Round Two

Catrina Allen’s Stats After Round TwoJessica Weese’s day did not start off how she envisioned as she took bogies on the day’s first couple holes. She settled down and carded birdies on hole six, ten and eighteen to match Allen’s three birdies and stay tied for the lead. Weese, who is looking for her first Pro Tour victory of her career, is in a great position to do so in Utah. Weese was able to capitalize on some longer putts. She knocked down two circle 2 putts to stop the bleeding and save a bogey on hole two, and a par on hole seven. She is now leading the field in circle 1 and circle 2 putts for the event. That kind of grit and determination is going to be what Weese needs to overcome Allen on Saturday.
Jessica Weese’s Stats After Round Two

Amy Bilodeau (+8) improved on her first round score to put her at 18-over for the event and in third place. Madison Walker struggled to a 13-over round, falling into fourth at 19-over.
The Utah Open is set up to have an exciting finish on Saturday. Will Allen get that signature win of 2017 or will Weese breakthrough? Continue to tune in to the Disc Golf Pro Tour as we cover all of the exciting action for you.