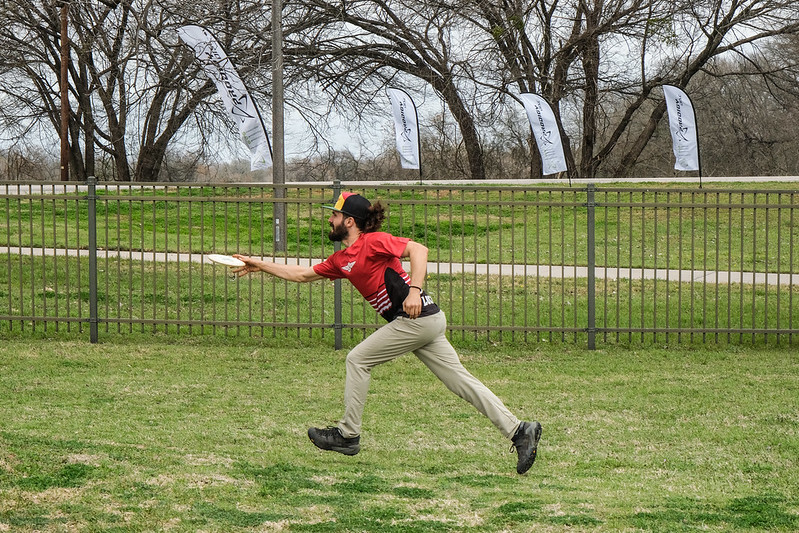 By Baker HeltonMarch 13, 2021No Comments

There was more wind to wrangle in the second round of the Waco Annual Charity Open presented by Prodigy. It is a tight battle in the men’s division, with Nikko Locastro holding a one-stroke lead while Kona Panis is dominating the women’s field and now holds a ten-stroke advantage.

Locastro finished his round 9-under, 54 to bring his tournament total to 18-under. He went on a tear on the back nine, with seven birdies. Locastro’s only blemish on the day came via an out-of-bounds stroke on hole 15, which led to a bogey. Locastro did his best work from the tee, as he gained 6.62 strokes on the field from tee->green.

Nikko missed the first few events due to a hand injury and seemed appreciative to be back playing again.

“I felt focused today,” Locastro said. “It feels good to be here… I’m feeling a lot of gratitude, and I’m grateful to be playing disc golf and to be here competing with the world’s best.”

The only person to beat Locastro on the day was Cale Laiviska. Laiviska shot 10-under par and made the largest jump on moving day, up 23 spots, to fourth place at 14-under.

Locastro and Laiviska will be joined on the lead card by Bradley Williams and Gavin Rathbun. Rathbun showed no nerves en route to a 6-under par round that puts him at a tournament total of 17-under par. Rathbun is tied with Williams, who is also at 17-under par after finishing 8-under on the day. Both Rathbun and Williams are just one stroke behind Locastro.

Kona Panis separated herself from the rest of the field on moving day. Panis now has a 10-stroke lead after shooting a 6-under par, 61 to move her tournament total to 12-under. Panis was dominant in all phases of the game, gaining 5.46 strokes on the field from tee->green and 5.48 strokes from putting.

What makes her round even more impressive was that she had a double-bogey on the first hole. She was able to counteract that blunder and one more bogey with nine birdies on the day.

“Pretty amazing, pretty stellar,” Panis said about her round. Kona gave a sneak peak into her plans to hold onto her large lead, “just playing pretty safe and not doing anything crazy.”

Paige Pierce moved in the wrong direction in round two, shooting 8-over par to bring her tournament total to 5-over. She fell 12 spots and is 14 strokes out of the lead.

Madison Walker sits in second place after rising up the leaderboard on moving day. Walker moved ten spots after shooting a 2-under, 64. Lisa Fajkus and Missy Gannon will round out the lead card after shooting 1-over rounds to bring their tournament total to even-par.

The action continues tomorrow at the bEast for the final round. Scores and stats are available on UDisc Live and live coverage begins on Disc Golf Network and free on the DGPT YouTube channel at 1:30 pm CT.