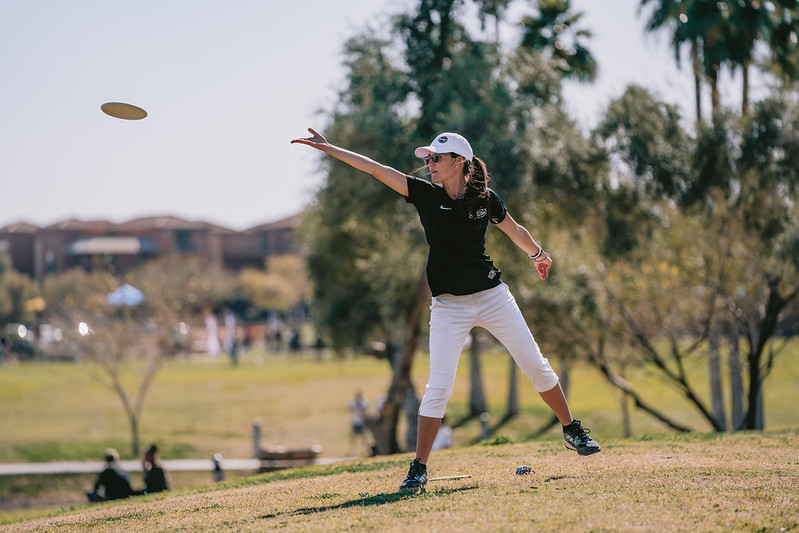 WACO – Round One Recap

By Baker HeltonMarch 12, 2021No Comments

It was a windy round one in Waco, Texas, as sustained winds of 20 mph wreaked havoc on the competitors of the Waco Annual Charity Open presented by Prodigy. When the dust settled, it was Gavin Rathbun and Kona Panis on top of their respective divisions.

Teeing off in the early morning hours, Gavin Rathbun and Gannon Buhr shared a card and set the mark for the rest of the field to chase. Rathbun, a 1026 rated player from Oswego, Illinois, had a bogey-free round and used a streak of five straight birdies on holes 10-14 to propel him to an 11-under, 52 round.

Buhr, a 1007 rated golfer from Urbandale, Iowa, also carded 11 birdies, but bogeys on holes 12 and 15 found him two strokes behind Rathbun at 9-under.

Rathbun and Buhr’s scores held throughout the day as many competitors in the field had trouble wrangling the wind. Nikko Locastro and Bradley Williams were able to fight through the conditions to secure a place on the lead card going into round two. Locastro and Williams both shot 9-under and are two strokes out of first place.

Locastro’s combination of accurate driving and long-range putting was the key to success. He ranked 2nd in Fairway Hits at 83% and led the field in strokes gained from Circle 2 at 2.85.

Williams’ short game helped propel him to his lead card spot. Bradley gained 4.49 strokes on the field from putting and had a Circle 1 putting percentage of 91%.

Kona Panis led the way in the women’s division, shooting a 6-under, 61. She Panis was extremely accurate from the tee, gaining 7.20 strokes from Tee -> Green to lead the field.

Even with her impressive round, Panis still has room for improvement for round two. Her only mistake came on the statistical easiest hole on the course, 14. Her drive on the 303-foot, relatively open shot kicked off a tree and out of bounds. Her bogey on 14 was the only one on her scorecard for the day, compared to seven birdies.

Panis sits ahead of three women from the round one featured card. Paige Pierce and Valarie Mandujano sit three strokes back, and Catrina Allen is four strokes out of first.

Pierce was third in the field in fairway hits at 80% and second in Circle 1x putting at 92%. Pierce’s big mistake came on the 279-foot hole 11. Pierce carded a double-bogey on the wooded hole. Pierce had eight birdies on the day, but the double-bogey plus three more bogeys left her score at 3-under, 64.

Mandujano had a rough start to the day, with two bogeys, but the Texas native bounced back nicely to finish her day at 3-under and in a tie for second place.

Catrina Allen will round out the round two lead card after shooting a 2-under, 62.

The action continues tomorrow at the bEast for round two. Competitors will look to make their mark on moving day and rise up the leaderboard. Scores and stats are available on UDisc Live and live coverage begins on Disc Golf Network at 12:30 pm CT.