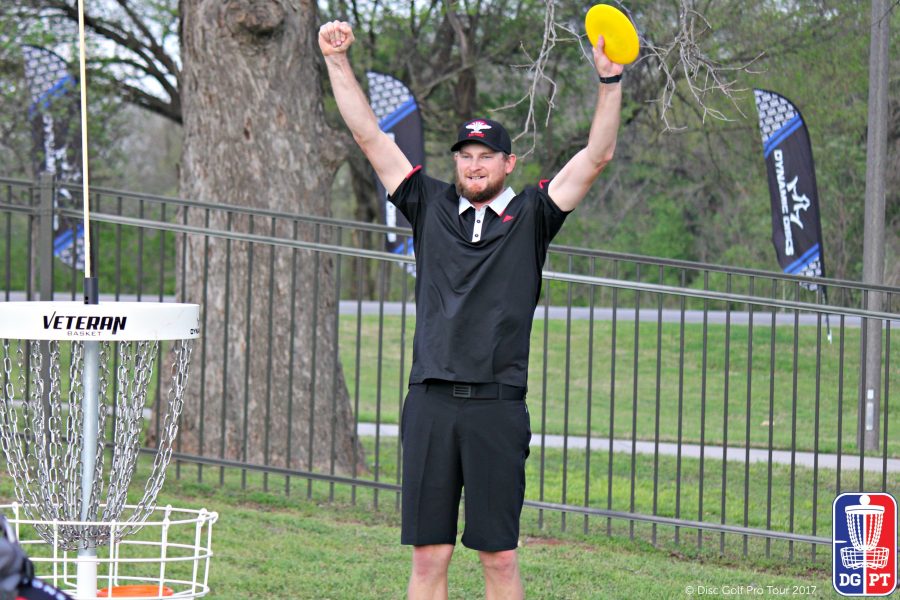 WACO MPO Final Round: A Duel in Waco

This was the last day, last round, and the last chance for the professional men to claim a victory at the Waco Annual Charity Open presented by Dynamic Discs. The lead ​
card featured the same leader for two straight rounds, Jeremy Koling, hanging onto a one stroke edge above the tenacious Ricky Wysocki. Just two strokes out of the lead was Simon Lizotte with Gregg Barsby rounding out the foursome only trailing by three. With a course like “the bEast” a handful of strokes would never be enough to to decide the outcome. One thing was for sure these leaders came to play.
Gregg Barsby is no stranger to high pressure situations or playing on the lead card. His stats coming into the third round were nothing less than remarkable. Barsby was ranked top five overall in four categories including an 80% in circle 2 putts which translates to only missing 20% between thirty-three and sixty-six feet. He has shown that he has the skills to carve out shots in the unforgiving wooded holes and to my surprise, he began this day by missing some lines in the wooded areas and having his ridiculous approach/putts for birdie from 15 to 25 meters chain out numerous times, thus stalling out before making a run for the leaderboard. He finished the event at respectable thirty under par tied for fifth place with Miles Seaborn.
A day can’t go by without talking about the wonder kid from Germany, Simon Lizotte. Suffering yesterday from tree annoyance, he threw much cleaner lines today and kept pace just behind the leaders but just out of reach. He finished the day in third place at thirty-one under par.
From the start of the season, Ricky Wysocki’s game was running on all cylinders and the second stop of the Disc Golf Pro Tour was no exception. Wysocki hit a heart-stopping 90% of the fairways through the first two rounds. For the most part Wysocki’s game remained in neutral as he was never out of contention but never really in it either, finishing in a tie for third place with card mate, Simon Lizotte.
Jeremy “Big Jerm” Koling took advantage of every opportunity that was presented to him this weekend. He was in the right place at the right time more often than any player, other than Wysocki, who he tied for fairway hit percentage. Much more than just hitting fairways, Koling was 89% from the circle 2 range, maintaining his lead by hitting long-distance birds and timely pars. Although he found himself at times playing from awkward stances or trees blocking his way, he frequently managed to salvage strokes with creative shots that time after time landed in his favor.
James Conrad from Blacksburg, Virginia should have the nickname “smooth”. His form is so fluid it is as if he hardly rustled the leaves under his feet. He’s played solid rounds all week long, hovering within range of the leaders every step of the way. So it was no surprise to see his sterling play continue here today. Starting on the chase card, you’d be hard pressed to tell who was leading and just who was chasing. He played inspired disc golf, carding seven straight birdies and taking the outright lead before he ever finished his front nine. Watching Conrad play today showed the fans that he has every shot at his disposable. From long, flexing forehands, to silky straight drives. James “Smooth” Conrad had fourteen birdies and one eagle on the day. He was 95% in fairway hits and really never got into too much trouble during the final round carding only one bogey. His name you will no doubt hear again.
Before the final round I asked Jeremy what his strategy was going to be today and all he had to say was simple, “Win. The. Card.” This statement could have meant that he had the course dialed-in or that his biggest threats were playing on the card along side him. Unfortunately, Koling didn’t seem to see James Conrad coming from the chase card. Jeremy missed putts normally well within his range, which seemed to stifle most of the streaks he attempted to start with his round late in the day.
Just when you thought it was over, Jeremy hit a huge eagle putt on hole sixteen to bring him within two strokes of James Conrad. Never a player to give up, Jeremy Koling birdied hole seventeen to tie James going into the very last hole of the event. Stepping onto the tee pad on eighteen Jeremy made the decision to go for it over the water and landed safely! He converted the birdie and gave the fans the playoff they wanted! Both players finished the offical tournament play at a stunning thirty-four under par.
The Playoff holes matched Jeremy “Big Jerm” Koling versus James “Smooth” Conrad in sudden death on holes 3, 4, 5, and 6. If it took all four, they would play these four on repeat until a champion was crowned. Having thrown the hot round of the day (and the week) at 15 under par, Conrad took the box first. Throwing one of the longest throws of his day, Conrad’s backhand trickled just barely out of bounds. Jeremy followed James with a perfect forehand and a safe upshot to a guaranteed drop in birdie to apply the pressure. Despite the out of bounds throw, Conrad was left with a 60 foot putt for a circle three to move the playoffs on to hole four. His putt was fast and true. The split second flight felt like an eternity that came to a crashing end as James hit low and left, splashing out of the basket. Koling had claimed the victory.
Your 2017 Waco Annual Charity Open presented by Dyanamic Discs Champion is Jeremy Koling! Congratulations Big Jerm!