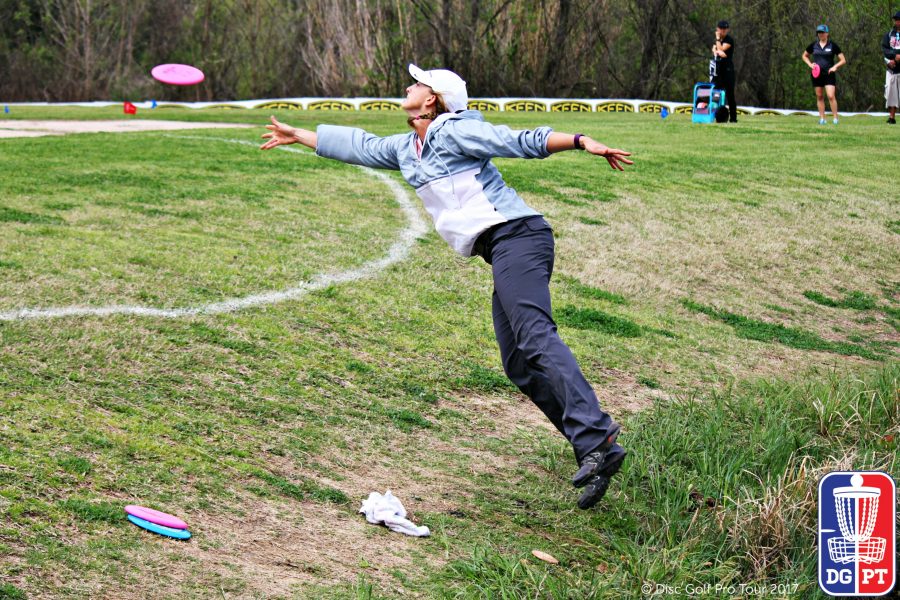 The cream of the crop rose to the top in day two of the Waco Charity Open presented by Dynamic Discs. Paige Pierce and Sarah Hokom put themselves way out in ​
front of the rest of the competition to set up what looks to be a two horse race, with one round left. Pierce struggled some in round two, shooting seven strokes off her first round pace, for an even-par, 67. For the event, Paige is 7-under par and currently holds a three stroke lead over Hokom. Hokom shot a 2-under par, 65 for the second straight day to find herself at 4-under for the tournament and within striking distance of Pierce.
Pierce could have found herself in an unfamiliar position, without the lead, if it wasn’t for the round’s final hole. Hole six of the Brazos East course is the finishing stage for WACO and is a 492 foot par four, with water playing out of bounds on the right and a sidewalk marking the out of bounds on the left. Hokom stepped up to the final tee shooting a hot, 4-under par for the round, and a chance to finally take the lead from Pierce. Unfortunately for Sarah, she found herself going OB twice and carding the double bogey, six. Pierce, never one to miss an opportunity, birdied the hole for a huge three stroke swing.
Pierce’s struggles on the day came from two double bogies that left her scrambling to try and maintain her lead. Overall, Pierce hit 85% of the fairways, and knocked down 86% of her circle 1 putts. Hokom, once again, topped Pierce off the tee, hitting 90% of the fairways and made 78% of her circle 1 putts en route to the hot round of the day in the FPO division.
Other notable performances included Melody Waibel shooting a 3-over par, 70, to put her total score at 8-over par for the event and to move up three spots for third place. Waibel is in a three way tie for third with two Texas locals, Stephanie Vincent and Lisa Fajkus who shot a 4-over and a 6-over respectively. Madison Walker jumped up four spots after a solid 1-over par, 68, round and is tied for sixth with Catrina Allen.
The Waco Charity Open presented by Dynamic Discs, wraps up tomorrow with the the competitors taking on the Brazos East course one last time. Will Sarah catch Paige or will Pierce learn from her mistakes of the day and claim another tournament victory? You won’t want to miss out on this ending in Waco.