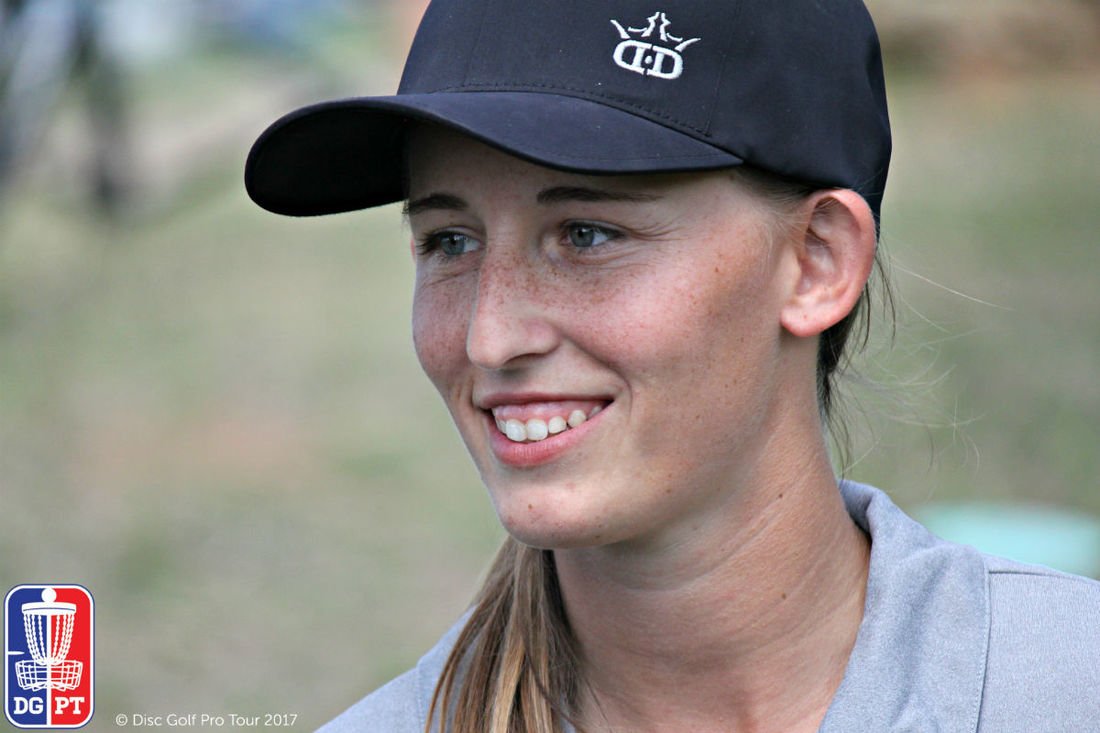 Even if you are not surprised to hear it, you have to be impressed – Paige Pierce has continued her undefeated streak in 2017 claiming the title of Waco ​
Annual Charity Open Presented by Dynamic Discs FPO Champion. Sarah Hokom, who placed second, made her presence known, lurking only a few shots behind Pierce, and even briefly tied, before a rough finish on the final day. Let’s take a look at these top two player’s stats to get a sense of why there was a stunning 13 stroke gap between them and third place.
Paige Pierce

Pierce didn’t lead the pack in every stat, you don’t have to in order to pick up the win. Where Pierce excels is consistency and composure. Not only did she lead the FPO Division in Birdies – of which she carded 19 – she also held it together when things didn’t go according to plan. I’ve said it before, and I’ll say it again, scramble matters, and Pierce knows how to scramble. She had the best scramble rating at the Memorial (80%) and she did it again here in WACO. Scramble won’t win a tournament, you obviously need to throw some hot rounds too – which Pierce did in rounds and three. Scramble does keep the bogeys off your card though, and Pierce only wrote in five numbers above par for the entire event, few players in any division this weekend will accomplish that. Congratulations on another impressive win Paige!
Sarah Hokom

Sarah, Sarah, Sarah. You flew so close to the sun today but it was those last nine holes that took a serious bite out of your score. As the FPO lead card rounded from the front to the back, Hokom had caught Pierce and the two were tied, but that wouldn’t last long. Throwing out of bounds three times on the back nine of the final round, Hokom ended up carding five bogeys in nine holes while Pierce threw only birdies and pars. Let’s stay positive though and focus on what Hokom did right – drive. The top four stats (Fairway Hits, Parked, Circle 1 in Regulation, and Circle 2 in Regulation) are a player’s driving stats, the lower four (Birdie %, Scramble, Circle 1 Putts, and Circle 2 Putts) give us a sense of what they do with those drives. If you haven’t watched Hokom play before you might think her style is unorthodox – unlike most pros, Sarah throws almost exclusively forehands, or “flicks”. Being different is totally fine by me, especially when you’re ranked first for all four driving stats. If Hokom can get her scramble rating up and make more of those inside the circle putts, our current DGPT points leader Paige Pierce is going to have to watch out. For right now though, Hokom will have to settle silver with two second place finishes and a current second place ranking in the DGPT Points series.
Thirteen strokes behind Hokom, and a devastating twenty strokes behind Pierce is our third place finisher Stephanie Vincent out of Austin, TX. Perhaps most impressive about Vincent’s game this week was her number one ranking when it came to Circle 2 Putts. Vincent tossed in three putts from outside circle one and that’s not including one throw in from just beyond circle two’s edge at 66 ft. One stroke behind Vincent, tied for fourth, are Catrina Allen and Madison Walker. Both of these top pros struggled, failing to put together any rounds at or below par. This just wasn’t their time to shine, but don’t count them out of the running yet. In the DGPT points series, Allen is in third and Walker is in fifth. We have seven more events left before the Disc Golf Pro Tour Championship, but if Pierce doesn’t slip up somewhere, the rest of the field will be hard pressed to keep up.
Check back soon as we prepare for the third DGPT event, the Nick Hyde Memorial Presented By Innova in Rockwall, TX. Until then get outside, throw some plastic, and rattle some chains!