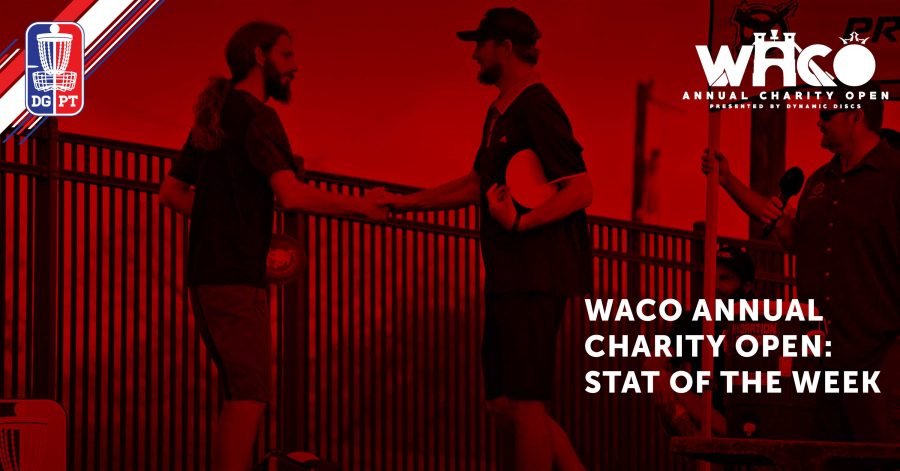 Here we are, folks. In just a few days the Disc Golf Pro Tour is landing in Waco, TX for the Waco Annual Charity Open (WACO). In fact, plenty of the world’s top pros have
already descended upon the relentlessly challenging Brazos East course for practice. Before the Pro Tour existed, WACO had been running for decades – so it has a history. The 2017 WACO was no exception and was certainly one for the books. If you haven’t seen or heard about last year, go watch it now , otherwise, let that recommendation be your spoiler warning.
There have been plenty of close tournaments in disc golf. There were plenty of close tournaments last year on the Pro Tour. The average score gap between first and second was 3.1 throws last year – even including Josh Anthon’s crushing 10 stroke victory margin at Ledgestone. So it comes as no surprise that 3.1 is also the average gap between first and second. What sets WACO apart from the rest is that James Conrad, who was playing from the second card, was only three throws behind Jeremy Koling. That made WACO, definitively, the tournament with the tightest-packed leaderboard headed into the final day. In fact, on last year’s Pro Tour, every time a player held sole possession of first going into the final day, that player won.
WACO is an outlier, an exception to the norm. When the final round started there were four players within three throws of Jeremy Koling, who held the lead. Koling didn’t have any wiggle room, he was going to have to put up a hot round. And that he did, in the third round Big Jerm threw a 1048 rated 55, 12 under par. That is objectively great disc golf. Koling played great golf all week with all three rounds rated higher than his rating. He got there mostly from the tee, in the categories of Circle 1 in Regulation and Circle 2 in regulation he placed first and was only 1% off from taking first in fairway hits too. Even though he was only 85% putting from inside circle 1 and 15% from circle 2, Jerm simply gave himself more opportunities for birdies than just about anyone else…anyone else but James Conrad.
Conrad made the lead card on the first day, only two behind Koling. In round two he fell off the pace a little bit while the rest of the packed seemed to pick it up. That bumped him to the chase card. At  WACO, with a good number of tight wooded fairways, that is no problem for James Conrad. Few people are such capable wizards in the woods as Conrad. From putter to driver, James just throws better between trees than rope. If you look at the stats, it wasn’t just one part of his game that let James take Jerm into overtime, everything was on fire. After 16 holes he was 15 under par. Conrad placed in the top ten for every stat category except scramble that day. Unfortunately, no stats can explain what happened on Conrad’s 17 th hole. Having thrown yet another perfect drive, James Conrad failed to turn his approach over enough, letting it hyzer out into the OB water left of the green. Had his approach landed clean the pressure would have been on Koling to birdie out.
The rest of the day unfolded fairly quickly. Jerm birdied the 17 th hole of the day, essentially taking two throws back from Conrad when he bogeyed. They both birdied the 18 th , and the playoff ensued. The bonus golf only lasted one hole, but even then, when Conrad went OB after a smash of a drive he still nearly made the jump putt for the birdie three, but ultimately losing to Jerm who kept his drive clean and birdied for the win.
We could analyze all the stats we like, the reality is both players left a throw or two out there over the week. Sure Conrad bogeyed 17, but Jerm also eagled from outside the circle on 16. What if he had missed that putt? I do think it’s worth noting that Conrad throws almost exclusively backhands. That fateful shot he let slip OB would have had a much higher chance of staying in bounds had it been fading right instead of left. Had the shot been a narrow wooded fairway he wouldn’t have been assessed the penalty throw. It didn’t help James that the playoffs were starting on the most wide open hole on the course with the narrowest OB lined fairway. It just didn’t suit the strongest aspect of his game.
James has a chance at redemption this week. He played well two weeks ago at the memorial, barring his three-hole melt-down on the back nine of the final round. That bodes well for his chances at WACO this year. We know that James will crush the wooded fairways, and after seeing him play the memorial, notoriously sky-hyzer friendly, so well perhaps he’ll have what it takes to tackle the varied challenges of Brazos East, better known as “the Beast”. So make sure you don’t miss any of the action in Texas this week. Live broadcast starts at 4PM EST and we will be providing daily recap articles as you’ve come to expect. Will Big Jerm defend his title? Will Conrad put it all together for that first Pro Tour victory? Or will we see someone else at the top? Stay tuned to find out as the action picks up in Waco, TX for the 2018 Waco Annual Charity Open starting at 4pm ET on March 15 .