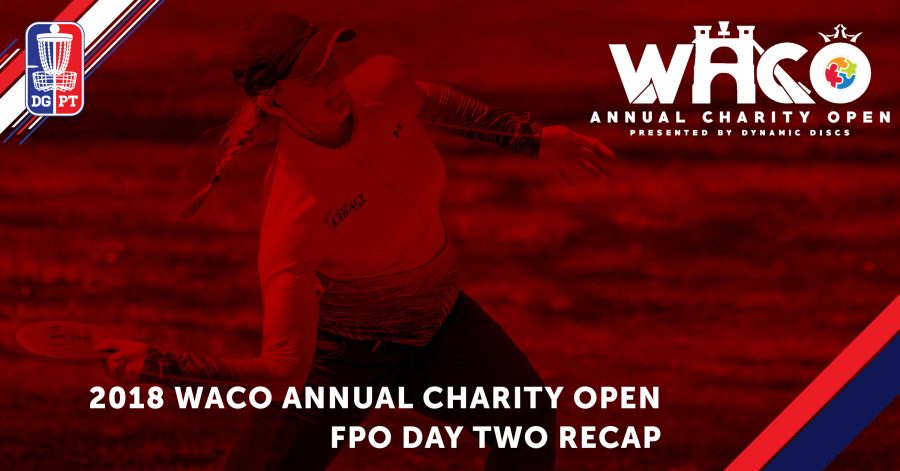 We are two rounds in to the Waco Annual Charity Open presented by Dynamic Discs and Sarah Hokom has carded another hot round to maintain her lead. Throughout the
round Paige Pierce tried to make a push but Hokom’s 11 birdies were enough to hold her off.
Hokom’s round was focused on consistency. It was not until hole nine before Hokom carded a par. In the first eight holes she landed two bogies and six birdies. On the back nine Hokom landed five birdies and three bogies. Hokom landed several of her birdies from the C1/C2 line carding 88% C1 putting and 75% C2 putting for the day. She has set herself up for a stellar finish during the final round tomorrow on ‘The Beast’.
Paige Pierce pushed hard today but struggled with the putter on quite a few of the holes but ultimately could not catch Sarah as she went birdie for birdie down the stretch. On the second to last hole of the round Paige took an uncharacteristic double OB six. On the drive Paige drove straight long into 18’s fairway. On her upshot she landed short left bouncing OB again. This was a missed opportunity for Paige to potentially gain two more throws on Sarah going into the final day.
Catrina and Lisa did everything they could to stay on the lead card for the final day. Cat would have been -1 on the day if she had not carded a triple bogey six on hole one. Four putting inside the circle was a rough way to start the day but ultimately she recovered nicely landing birdies on the front nine and carding only three bogies on the back nine.
There were several players who had stellar days in the FPO division compared to round one yesterday. Meredith Giere may be low on the leaderboard but she threw 36 shots better than yesterday. Brittany Zimmerman also threw 30 better than yesterday. Today’s scoring conditions were significantly better and it will create an exciting final day tomorrow. You can watch the women’s coverage from today starting at 4pm ET .
​