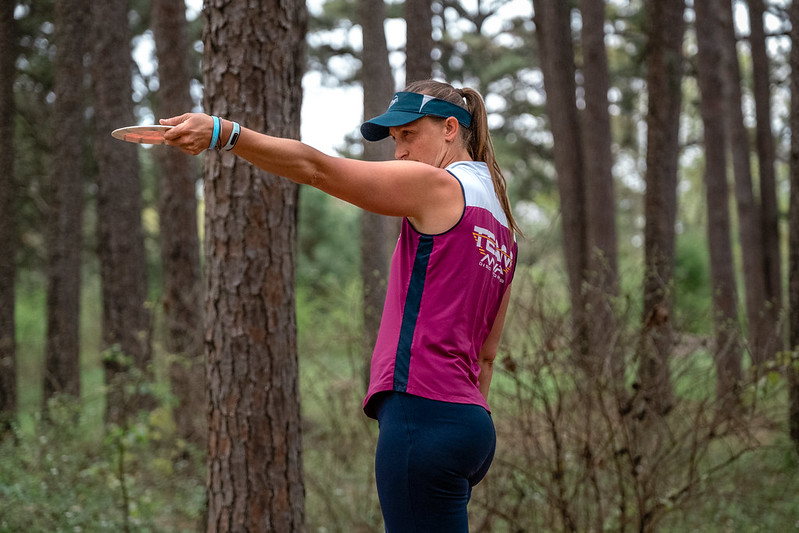 After a few close finishes already this season, Sarah Hokom took the top of the podium after a decisive third and final round at the Vintage Open. Through another windy day at Old Post Park, Hokom was 100% putting in C1 and shot the hot round of the day in the FPO division to win t he event with a final of -8. Jessica Weese, Catrina Allen, and Missy Gannon all grabbed a few birdies and played solid rounds to top off the Top 4, but Hokom kept the pressure on, including 4 birdies in 7 holes in the mid stretch of the course.

Allen, who was the only other FPO player to shoot under par today, had the second highest C1 putting conversion rate and was the best in fairways hit. But just couldn’t catch up to Hokom’s lead. Lisa Fajkus, Kona Panis, and Stacie Rawnsley just couldn’t find their groove today, shooting a few over par each in their final round.

Sarah Hokom plays her way to a -4 final round and wins the Vintage Open 2021.

With a nail biter down to the wire, Calvin Heinburg held onto the top position and finishes with a -26 to win the MPO division. James Conrad put on the pressure, even shooting a better round than Heimburg, but ultimately couldn’t manage to take the crown. Conrad grabbed a birdie and Heimburg a bogey on hole 16 to bring them within 2 strokes. Holes 17 and 18 were must birdie or better for Conrad, which he was unable to do. Already with a 2nd, 3rd, 4th, and 5th place this year on, Heimburg completes the cycle with his first win of the year.

Strong putting and a -6 final round got Calvin Heimburg his first win of the 2021 season.

Gavin Rathbun wasn’t able to replicate his round one results, shooting a +1 final round and finishing T-5th.  Nikko Locastro and Ricky Wysoki, who both already have tournaments wins this year, both played good final rounds, but needed a few more strokes if they hoped to catch Heimburg and Conrad. Some players came our firing for the final round, like Nathan Queen, Adam Hammes, Raven Newsom, and Casey White, and managed to climb the leaderboard for the final standings.

The Disc Golf Pro Tour heads to Jonesboro, Arkansas, on April 16th – 18th for the next event, the Play It Again Sports Jonesboro Open- Presented by Prodigy to plat at Disc Side of Heaven. Scores and stats will be available via UDisc Live, and the final round can be seen live on the Disc Golf Network.