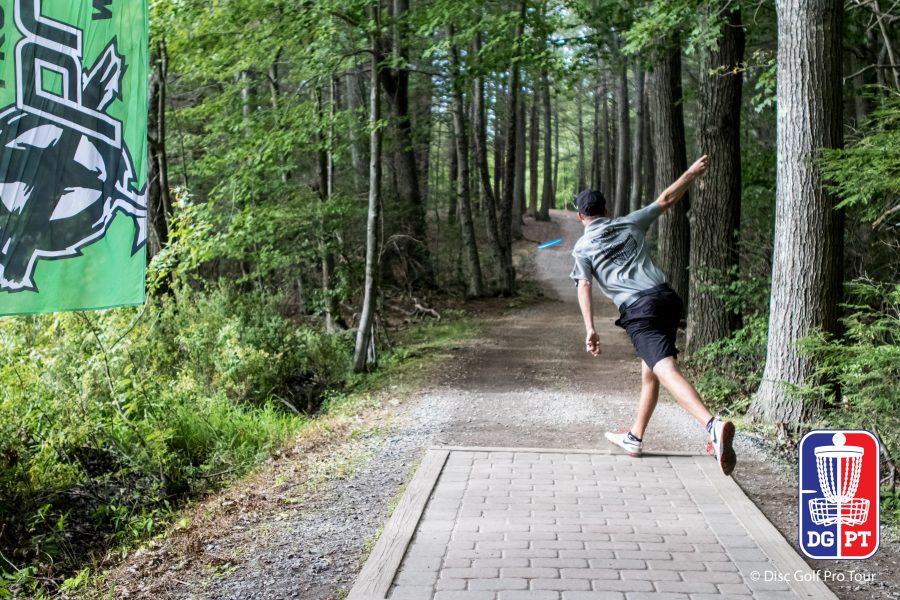 The final day of the 2017 Vibram Open Men’s Division has come to a close and in true dramatic form. Players not only tackled Maple Hill, they fought the weather
through every inch of this championship course. As the last putt fell into the basket it was Ricky Wysocki who took home another Vibram Open victory. Although they weren’t on the same card it was close the entire day with Eagle McMahon and Paul McBeth making impressive runs at the leaders from the chase card.
Wysocki, like his co-leader at the start of the day, Barsby, played well through out the day. Even though he was never was able to build up the momentum some of the players chasing him down were, he didn’t need to in the end. He was 100% inside circle one despite the wind, and held on to a 70% scramble rating. Although not as hot as his third round 50, today’s 57 clenched the win with a two throw lead. Ricky kept himself in the hunt the entire week and in the end he was able to stand at the edge of the island green with a smile on his face, knowing he was steps away from victory. Congratulations on another fantastic victory Ricky!
Gregg Barsby was the only player to hold on to first place for more than a single day this week, but a lead is never safe at Maple Hill. Throwing one over par today he unfortunately fell off the hot streak he’d had all week. He seemed unshaken by OB trouble on hole two, picking up two birdies in the next three holes. Hole six slowed down his momentum a little, but it was coming up inches short on eight to take his second OB penalty of the day that made it clear his lead was in jeopardy. Barsby came out to Maple Hill early and it showed all week. As is always the case it came down to the final round and Barsby will be leaving town with a fourth place finish.
Eagle McMahon is apparently unaffected by the harsh conditions of an early autumn New England storm. Take hole fourteen for example, the water was swirling with wind and rain in front of the basket perched upon the looming precipice. His drive carried long over the basket, but he wouldn’t be stopped, draining the 38 foot circle two death putt without hesitation. On track for a brilliant nine under par after a smash of a drive on 18, he lined up an backhand anyhzer with his putter to set himself up for a final birdie in a day filled with them (11 total). His toss was too far right hitting the rock wall that defends the side of the island green, bringing his smoking hot pursuit of the leaders to a crushing end and a tie for second.
Putting up as respectable a display as Eagle from the chase card was none other than Paul McBeth. In fact the two finished tied for second at 21 under for the week. Like today’s winner, he was 100% inside circle one and even found the chains twice from circle two. McBeth also managed a 100% scramble rate in these treacherous conditions. It was his putt that skipped off the top of fourteen’s basket and into the water that amounted to a second place tie. If the only thing that changed in his round was getting that putt inches shorter we’d be telling a different story about how this year’s Vibram open came to a close. Amazing play Paul, great to see you out on the course.
On top of all the fantastic play in the top ten spots today it was Simon Lizotte who moved up the farthest. Simon shot the hot round of the day at eight under par. With nine birdies, and a single bogey on hole five from an OB drive, Simon passed 14 players today, landing in a tie for seventh place. Par at Maple Hill is challenging in perfect conditions, eight under in rain, wind, and temps in the 40s is a whole other thing. Nice shooting Simon.
That wraps up our coverage of the 2017 Vibram Open at Maple Hill. As I write this final words Paige and Ricky are leaping into the pond, staring down the weather one last time. Thanks for following us in all the ways you do, and see you in Vermont!