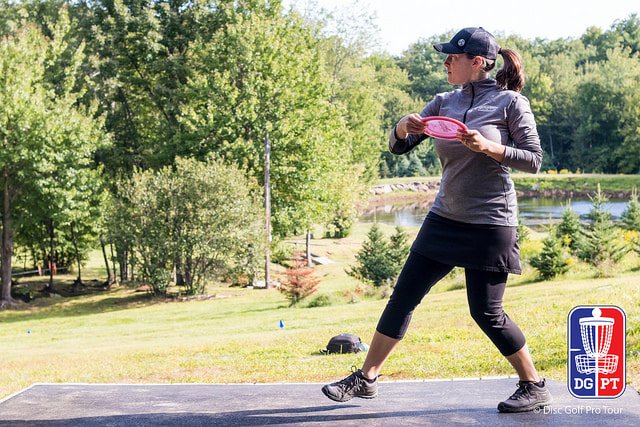 With the first two days of the Vibram Open in the rear view mirror, but the great play was far from over. The ladies were excited to take advantage of “moving day” and make
some moves of their own while there was still time remaining. Valarie Jenkins has played incredible disc golf on the unforgiving Maple Hill course, and after two full rounds, Val remained the only player under par for the tournament.
Honorable mention goes out to Lisa Fajkus on her great third round, finishing (even) and using her 100% Circle 1 rate to end the day with a solid score. She currently is (+13) and in an eight place tie with Erica Johnson.
One of the highlights of moving day was Melody Waibel. Because of an impressive Circle 1 rate of 95%, she was able to shoot a 3 under par, moving up two spots. The stat that stands out most for Melody was the amount of birdies that she was able to convert between round one(6%) to round three (33% ).  Discovering how to attack the course has given Melody a great chance to move up the leaderboard. Melody currently sits in seventh place. Can Melody continue her stellar play and make some waves on the final day?
Considering the rough first round that Vanessa Van Dyken had to endure, the talented disc golfer made some crucial adjustments the second day, including raising her scrambling rate by 27% and finishing round two (even) to make the lead card for moving day. Unfortunately, today Vanessa saw her game go the wrong direction as her scrambling percentage plummeted to 25%. She ended her third day with a one over par and (+6) for event. Vanessa currently sits in fifth place going into the final day.
Jessica Weese has seen her struggles at the Vibram Open. Her first round was filled with unfortunate high numbers that only drove up her score, and made her fight for a title all the more difficult. But by the second day Jessica made some adjustments, lowered her score and with the help of an inspired Circle 1 putting performance of 90%, gave her an opportunity to turn things around. On day three she was the Jessica that the fans have come to enjoy watching.  She was able to birdie three of the last four holes and end her day one under par and (+5) for the event.  Jessica carved out a great round and is currently holding onto fourth place.
With all the success that Catrina Allen has had on the Maple Hill course, fans were wondering what kind of numbers she was capable of scoring at the event this week. Catrina did not disappoint! Aside from a disastrous triple-bogey on hole number 9 during the first round, she managed to salvage the round with the help of a clean back half. Determined to turn things around, Catrina saw her second round implode half way through, but armed with years of experience at the Vibram, Cat was able to add five birdies to finish her day with an even score. Catrina’s ability to stay in the hunt has given her some epic come-from-behind moments over the years. The third round was just the medicine Catrina needed to jump right back in the race for the Vibram title. Finishing strong was an understatement as she was able to gain four birdies in her last nine holes. She ended her day one under par and (+2) for the tournament. Catrina is sitting securely in third place.
The Maple Hill course may have teeth, but Paige Pierce has found a way to tame the wild beast over the first two rounds. As we’ve watched the way the ladies have played during the Vibram so far, the strategy of avoiding bogeys or bad holes in general seems like a futile prospect. Paige has instead taken what the course has given her and rebounded on the holes she knew she could be successful on. What caused her the most problem early in the event was her low fairway hit percentage of 56%. Thanks to a vast improvement of 67% the second day and 60% on the third, Paige was able stay within striking distance for the final round. She finished the day with a one under par and (+1) for the event, and with a one stroke lead over Catrina Allen to take second place.
Valarie Jenkins played an incredible third round, carding the hot round of the day with a four under par and remaining the leader through three rounds. She managed to gain four birdies for the day and with only a lone bogey to spoil her perfect scorecard. Her 89% scrambling rate made her day much easier than her second round. Val in in a great position as the final day of the Vibram Open looms large.  Val rests in first place with a five under par.
The final day of the Vibram Open will feature Valarie Jenkins (-5), Paige Pierce (+1), Catrina Allen (+2) Jessica Weese (+5). These ladies have battled for every stroke and left nothing on the field through the first three days. With only one round to decide it all and only a handful of strokes separating the competitors, Maple Hill may be the deciding factor on who will be crowned 2017 Vibram Open Champion! Can Valarie hold off the best disc golfers in the world? Join us tomorrow for the final day and be sure to watch the action unfold with scores from UDisc, highlights on Instagram, and daily recaps from www.DGPT.com . The action is far from over!