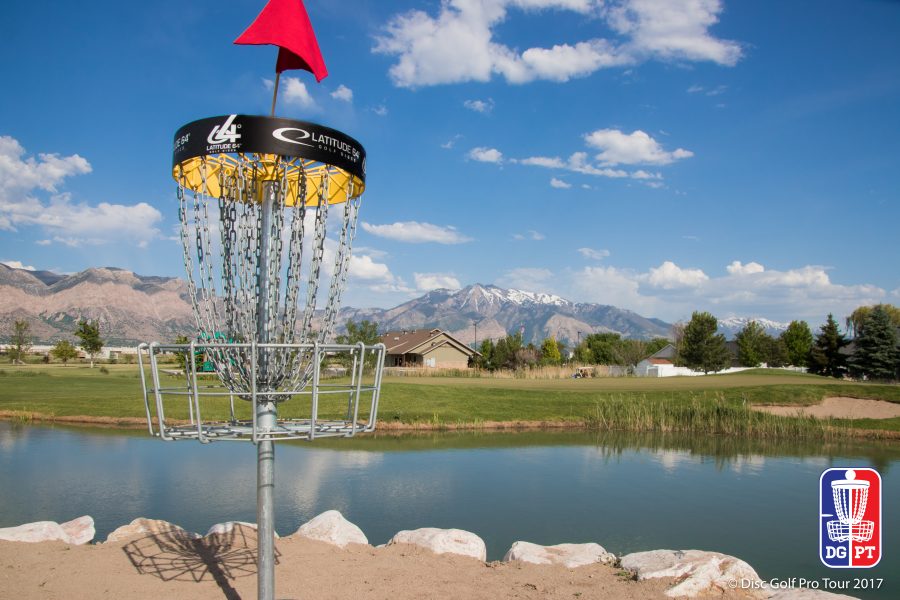 Today marks the end of May, which means tomorrow brings the start of the 2017 Utah Open presented by Latitude 64. That’s right, the Disc Golf Pro Tour is back. Get ready for ​
the high level competition you expect from the top level pros in both the FPO and MPO divisions. You can read our staff writer Baker Helton’s preview of the FPO division here and Jerry Roth’s MPO division preview here. The home of the Utah Open presented by Latitude 64 will once again be Mulligan’s Creekside Disc Golf Course in Ogden, Utah.
I had a chance to catch up with Jade Sewell, Tournament Director and Course Designer, to hear some of his thoughts on the young course. Two things stood out to me from our conversation. First, was Jade’s two-word description of the reputation of the course in the local disc golf community, “Water hazards.” They are everywhere on this course, but unlike most courses with the added danger of water, you’re more than likely to get your disc back if it lands in the drink. Jade told be a bit about the Waterdawgs, some local folk who you can witness doing their work in the video coverage of the rounds. Decked out in wet suits, snorkels, and flippers, the Waterdawgs return over 80% of the plastic that finds water.
Naturally, what course is any good without a signature hole? Mulligan’s sticks to what it knows best, rounding out the day with the devious hole 18. Jade referred to it as “short but brutal – the basket is only ten feet from the water.” He’s not wrong, at only 207 feet and practically wide open, hole 18 allows almost any shot you think you can get there, the question is can you stick the lie. Playing safe on the land side of the basket won’t guarantee you a birdie two though. Try looking up the definition of “death putt” and you might as well find a picture of hole 18. I won’t be surprised to see some of the top players laying up putts from circle’s edge.
Measuring in at 8,340 feet and a par of 58, Mulligan’s will certainly require distance but it doesn’t dictate how you puzzle each shot out. Built on a nine hole traditional golf course with plenty of open air – and fantastic views of snow capped mountains for that matter – Jade was telling me that “pretty much 80% of the course can be a hyzer or a flick.” That’s exactly what I like to hear about a course that plays seemingly wide open – options are what make it interesting to play. Don’t fool yourself though, this course is not easy by any stretch of the imagination. Plenty of water and plenty of wind will make for some dramatic disc golf. The only change to the course this year – the cart paths are in bounds.
Jeremy Koling and Catrina Allen are both on the roster, ready to defend their titles in their respective divisions. It won’t be easy work though, as many the top players in both divisions will be working to snag the win too. We’re also just about half way through the season which means its time to make a move on tour points. Ricky and Simon are practically tied for first in points but Simon isn’t registered to play. Paige Pierce holds a sturdy points lead over the FPO pack so Catrina Allen needs to start up some momentum for the season here with a win.
Follow the action with same day article recaps, live footage of the MPO lead card, highlights from the FPO lead card, and of course on most any social media you’re using. Don’t miss a throw at the 2017 Utah Open presented by Latitude 64.