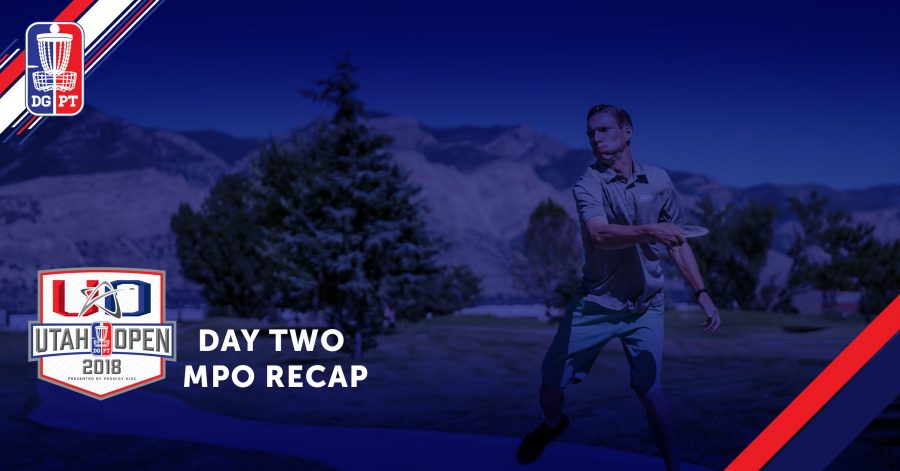 OGDEN, UT– Mulligans Creekside had its way with the MPO field today. High winds previously not forecasted made their presence known this afternoon and affected ​
scores up and down the order. At the beginning of today’s round, Paul McBeth led the men at -10, but a series of OB strokes on the front half of the course sent him tumbling down the scoreboard. Meanwhile, a level-headed Wysocki stayed clear of OB and made his way up the order, only taking a single bogey on hole 6 in the front half of the course. Winds continued to increase throughout the afternoon, making play more and more difficult as the near-three-hour round progressed.
As the lead card made their way to the back nine, they only found more trouble. Lewis Bitney and Preston Johnson struggled the most throughout the round. Johnson already carded a handful of bogeys on the front half of Mulligans, and Bitney added more strokes than he lost, especially on the last three holes of the course. Bitney finished a dismal +7 on the day, dropping 28 places going into the final round. Preston Johnson, who shot so impressively on day one, is now sat in a four-way tie for 12th position alongside Garrett Gurthie, Jeremy Koling, and Grady Shue.
Wysocki and McBeth were able to escape the clutches that caught out their cardmates, but the course at Mulligans Creekside played so difficult today in the wind that Wysocki was able to maintain first place despite only shooting a 56, just barely under par. However, a trio of bogeys and lack of birdies in the latter part of the round forced the four-time World Champion to record a +2 finish next to his name. While this relegates him to fifth place for tomorrow’s concluding round of play, this opened the door of opportunity for a few players to make solid moves and for others to spark fireworks in true moving day fashion.

MARK OF A CHAMP: Wysocki is holding on to a single-stroke lead over Coloradan Joel Freeman going into tomorrow. Can he hold off a charging young gun who is just as eager to win?
After an uncharacteristic start to the Utah Open, Eagle McMahon recorded the hot round today at -7, completing all 18 without a bogey and only suffering a single OB stroke. In addition to seven birdies, he managed a 100% scramble rate in today’s round, showing just how well McMahon plays when conditions turn gusty. He would have been tied for the lead as his pending event score was -11, but a first-round incident afforded him a pair of penalty strokes , so he is now tied for third place with Austin Hannum, who makes up the final spot on tomorrow’s lead card.
Hannum played lights-out today, and despite a few bogies, the Oklahoman scored far more birdies and strolled off 18’s island green with a -6 round score, enough to move him up an impressive 16 places to contend for the win tomorrow.
Riding a great day one performance, Greeley, CO, local Joel Freeman played mostly par-golf in today’s wind and coasted into second place very nonchalantly. As others imploded around him and incurred penalties of varying kinds, Team Innova’s rising star stayed out of the water and sand for the most part. Freeman maintained an 89% scramble and recorded a -3 round finish to earn himself sole possession of second place and is but one stroke off Wysocki going into tomorrow.
Anthony Barela made a great recovery on hole 18 today after a tough round as he aced the final island hole, much to the delight of onlookers. Be sure that tomorrow more excitement like that is in store for the entire gallery.
Expect action up and down the field as the men take to Mulligans Creekside once again for the final round of the 2018 Utah Open presented by Prodigy Discs. Live coverage will begin at 5 pm EST, 2 pm MST, and UDisc will have live scoring as it happens. Don’t miss the exciting final round tomorrow!