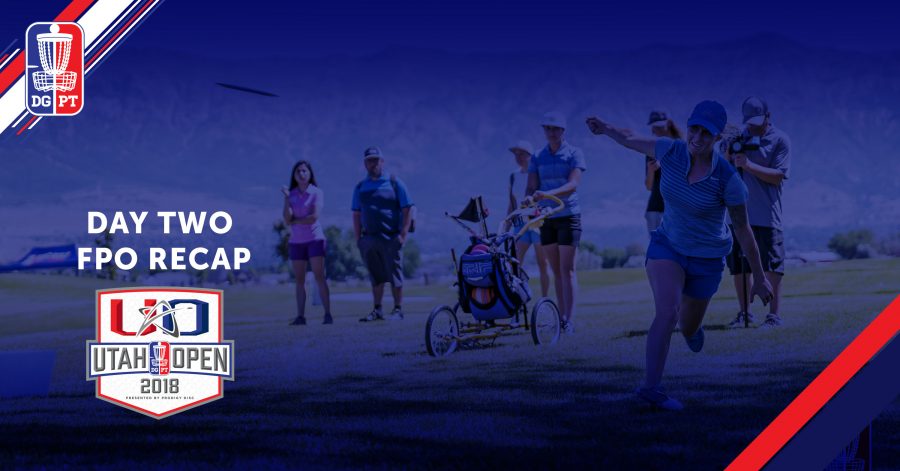 Today’s FPO action at the Utah Open presented by Prodigy Discs, showcased some of the sport’s top female athletes as they battled it out on the challenging Mulligans ​
Creekside DGC to position themselves for a chance to win the event on Sunday.   Yesterday’s round proved to be a nail-biter as we saw Jessica Weese working hard to defend her early lead, which included a 4-way tie for first at one point. She was able to hold a 2-stroke lead for most of the back 9, up until she missed the Island green on hole 18, sliding back into a tie for the lead with Catrina Allen coming into today’s round.  Ironically, both players ended up in a tie for 1st place during last year’s Utah Open, with Allen taking the win in a playoff. Rounding out the lead card for today’s second round are Lisa Fajkus and Paige Bjerkaas, both locked in a tie for 3rd Place and only three strokes back from the leaders.
Jessica Weese showed some signs of pressure in the early stages of the 2nd round, as she bogeyed holes 1 and 4, while Catrina Allen took advantage with birdies on holes 2 and 6.  However, Allen ended up carding a double bogey on hole 7 and losing another stroke on hole 8 to finish the front 9 with a 1-stroke advantage over Weese who carded a birdie on hole six only to give it back on the 819-foot par four 9th hole.  At the back of the lead card, Lisa Fajkus and Paige Bjerkaas were both keeping pace, shooting one and two over, respectively, on the front 9. Lisa Fajkus gained some momentum canning an impressive birdie putt on hole four from just outside C2.

There was no real movement coming from the chase card or players deeper in the field as the lead card made the turn to the back 9.
Catrina quickly gave back her 1-stroke advantage over Weese as she carded a bogey on hole 10, and moved to the back of the box on the lead card.  Allen and Weese would keep pace with each other, carding a string of pars on holes 11 thru 14, until Weese stumbled on hole 15 with a bogey and Allen regained the lead making her par.   Both Allen and Weese would go on to bogey two of the final three holes, leaving Allen with the 1-stroke advantage and sole possession of the lead as they completed their round. Paige Bjerkaas took advantage of the 1st round leaders by carding two birdies and two bogies over the final nine holes and shooting the hot round of 60 (+2) propelling her into a tie for 2nd place with Jessica Weese going into the final round.  Lisa Fajkus was able to maintain a position on the lead card by shooting a steady string of par’s on the back 9, with bogies on the two finishing holes. Deeper in the field, Kona Panis was able to play consistent golf and move herself up two positions and in a tie for 5th place with Karina Nowels, who started the day in that position.
The stage is set for the final round of the FPO division on Sunday, with only 2-strokes separating the top four players, and the chase card not far behind.  You can catch all of the FPO lead card action starting at 4 PM ET on the Pro Tour YouTube channel . Make sure to share with friends and tune in to watch !