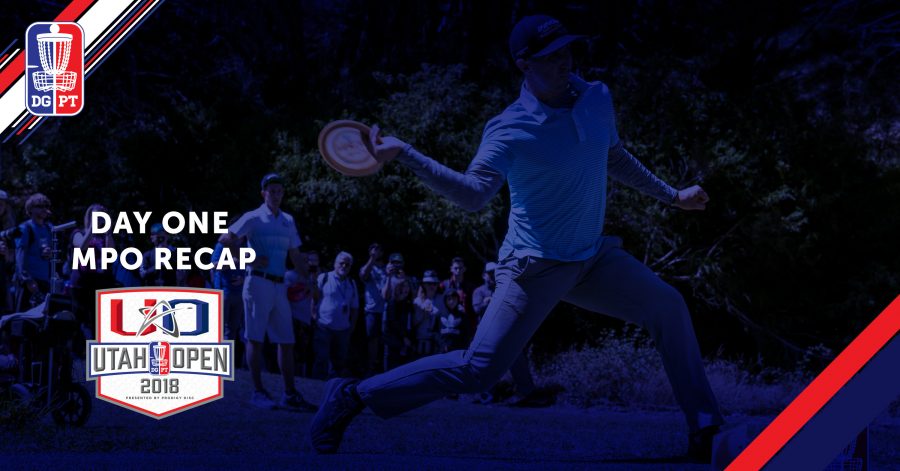 The MPO division had its share of excitement today as the men took on Mulligan’s Creekside Disc Golf Course for the fifth stop on the Disc Golf Pro Tour. The first card of the day started off hot, and the players who followed kept pace
The first card of the day featured Will Schusterick, Garrett Gurthie, Anthony Barela, and Paul Ulibarri and was filmed by Central Coast Disc Golf. On the first card Will, Garrett, and Anthony all came into the clubhouse at -5 which gave them the lead for a few minutes, until Lewis Bitney made it into the clubhouse with an -8.
Lewis had a respectable round, with only two OBs, which were also his only two bogeys for the day. Lewis had ten birdies and missed getting seventeen and eighteen. Lewis will be looking to clean up those two OB’s tomorrow and hopefully be able to hang with Paul McBeth and Ricky Wysocki on the lead card.
Notable finishes from those you may not notice
The great thing about Pro Tour events is we have the opportunity to see many great players who traditionally are not on a national stage. The Utah Open is no exception. The first round presented several names you may have heard of before, but may not have noticed at the top of a major tournament.
Cameron Messerschmidt has been on tour for a while, but he is not someone we have seen at the top of many leaderboards. Cameron is the only person in the top ten who played the round unblemished. He carded six birdies and twelve pars. He took one OB on three but was able to save the par. His 100% scramble rate was what saved the day for him. Cameron is four throws back of the lead and will be looking to move up while on the chase card tomorrow.
Ray Johnson is another name many may not have heard of on tour. His first Pro Tour event was San Francisco where he finished in 46 th place. Today he came out hot carding a single bogey six down. Ray started out slow, having a circle two-putt on his first three holes of the day, including a 49-foot putt (that he made) from an OB bunker. His only bogey came on the next hole where he two-putted inside circle one. The rest of the round was free of blemish including a par save on sixteen after going OB. Ray will be joining Drew Gibson, Joel Freeman, and Cameron Messerschmidt on the chase card.
The final name we wanted to highlight is on the lead card; his name is Preston Johnson. Preston is an Arizona pro who has played Memorial and Utah both last year and this year. Preston’s best finish at a Pro Tour event so far was 22 nd at the Utah Open last year. Preston will be joining Paul McBeth, Ricky Wysocki, and Lewis Bitney on the lead card. Preston will be looking to not take back-to-back bogeys on hole six and seven and hang on for the ride.
Ricky & Paul: The Story of the Day
The live feature card today included reigning Utah Open Champion Ricky Wysocki, Second in tour points Paul McBeth, event choice player Bobby Musick, and fan vote winner Colten Montgomery.
For most of the day, Colten was able to hang with Paul and Ricky. In fact, at one point Colten was ahead of Ricky and looked to be on pace to stay on the lead card. Colten landed three bogeys in a row on holes five thru seven and then spent the round digging himself back out of that hole. He finished -4 on the day and will be hunting for a shot at ending the day in the top ten tomorrow.
Paul McBeth started hot and matched Ricky down the stretch as Ricky made a push to catch up on holes eight and nine. After both Ricky and Paul parred hole twelve, they proceeded to go birdie for birdie down the stretch only missing hole sixteen. Their five-hole birdie volley led them to finish in first and second on the day with Paul carding a single bogey -10 and Ricky a lone bogey -9.
The Utah Open presented by Prodigy Disc is shaping up to be an exciting ride. Make sure you are ready to catch all of the MPO action starting at 5 PM ET tomorrow afternoon .