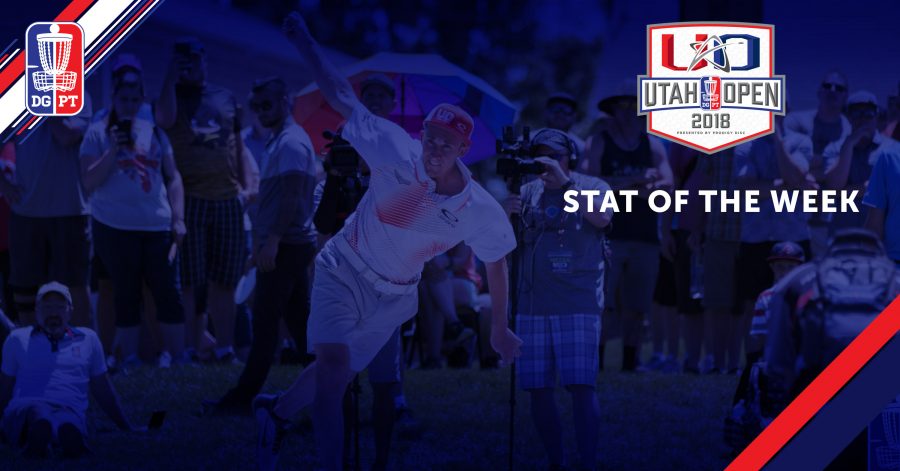 Make the couple extra clicks on UDisclive.com to check out the 2017 Utah Open , and you’ll see it right away – Ricky Wysocki’s legendary, door-closing, walk-off ace on ​
hole 18 of the final round. Take a second to look closer, and you’ll see it followed five birdies. Ricky was absolutely on fire. The 2017 Utah Open was a battle, so let’s hope the same will hold true this year at the 2018 Utah Open presented by Prodigy Disc. This year’s Pro Tour has seen a crowded leaderboard at every event with plenty of ties in the top ten. Some folks have been talking about whether the era of Paul McBeth and Ricky Wysocki dominance is over. With Ricky Wysocki, the defending champion of the Utah Open, what better time than now to dig deeper into whether or not the “Sockibomb” has fallen off. Let’s start with the Tour Points standings.
2018 Pro Tour Points

First of all, if you have any doubt in Ricky Wysocki or Paul McBeth for the 2018 Pro Tour, look no further than the tour standings. We are just shy of halfway through, and they hold the first and second positions in Tour Points. Ricky sits at 288 and Paul at 280. You have to drop almost 60 points to find Eagle McMahon in third at 227. Before we move on from Eagle, just remember, he’s in third for tour points but he skipped WACO. Everyone else in the top 8 has played four events, so they drop their worst event. Eagle doesn’t need that luxury. On top of that, Eagle has clenched three National Tour victories too.  We’ll spend this article looking at Ricky, but don’t take your eyes off McMahon this weekend, after all, it is the Year of the Shield, so it’s only fitting it just might be the Year of the Eagle.
Back to Wysocki. The numbers can’t lie, he’s in first place for tour standings, and outside of WACO, he hasn’t finished outside the top 5. I’d been thinking about whether or not Ricky was playing differently than last year so I thought, as we head to Utah, it would be interesting to compare his 2018 season stats to how he played last year at the 2017 Utah Open. His win at Mulligan’s DGC was nothing short of signature, a forehand ace with a trusty Harp, so it made sense to compare his 2018 stats to one of his victories. First, let’s take a look at Ricky’s stats from last year’s Utah Open.
Ricky Wysocki 2017 Utah Open Stats

As usual, Wysocki was on the fairway constantly, and when the green was concerned, he was getting close enough. He might have placed 6 th for Circle 1 In Regulation, but when you’re making 47% of your Circle 2 putts, letting some of your drives or approaches drift into Circle 2 isn’t that much of a problem. One of the seemingly more uncharacteristic stats for Ricky, or as Jeremy Koling call’s him, “Scramble Jesus,” was his 19 th place finish in the Scramble Stat. As we head into this year’s Utah Open, it’s helpful to look at what Ricky’s win took last year. Now, let’s compare that to his Pro Tour stats this year to see if he’s ready for the same performance.
Ricky Wysocki 2018 Pro Tour Season Stats

At first glance, the stats square up quite tight. Take a closer look and you can see a few differences that Ricky will need to account for if he wants to repeat his victory in Utah. For the Stats that Ricky excelled in for his win in Utah last year (Fairway Hits, Parked, Circle 2 in Regulation, and Circle 2 Putts) he’s not doing much worse in any of them except Circle 2 Putts – but those are the icing on the cake during most rounds, not a dependable part of your game for most players.
Looking at these numbers, it’s hard to say Ricky has fallen off. His 2018 stats are very close to his performance at a great victory last season. He is playing well enough to put together those stats again; they’re in reach. The difference isn’t Ricky though; it’s the field. For example, last year in Utah, making Circle 2 In Regulation 76% of the time meant you did it better than anyone else. 3% worse in the 2018 Pro Tour season and you’re in 20 th . 80% Fairway hits in Utah last year might be better than any other player that weekend but this season, Ricky’s 74% has him in 60 th . On the 2018 Pro Tour, 80% Fairway Hits only gets you to 12 th in that particular stat. For context, this season, Eagle is at 84% fairway hits.
So here’s my verdict, Ricky is just a little bit behind this season when you compare his 2018 stats to his performance at the 2017 Utah Open. He’s capable of a repeat, and as a momentum player, Wysocki’s got to be excited to play on a course he’s shredded before. The bad news that might not be good enough this year. In almost every single stat we track, the 2018 players are throwing better than the final tally at the end of last year. There is, of course, plenty of golf left this season and those stats may change. In other words, if you want to win the 2018 Utah Open, you’ll have to play better than a walk-off ace.
Don’t miss any of the action this week when live coverage kicks off Friday, June 22 nd at 5 PM EST. You can always find our written coverage here on DGPT.com right after each division finishes. Until then, grab a stack of harps, head to the 18 th hole of your home course and start practicing.