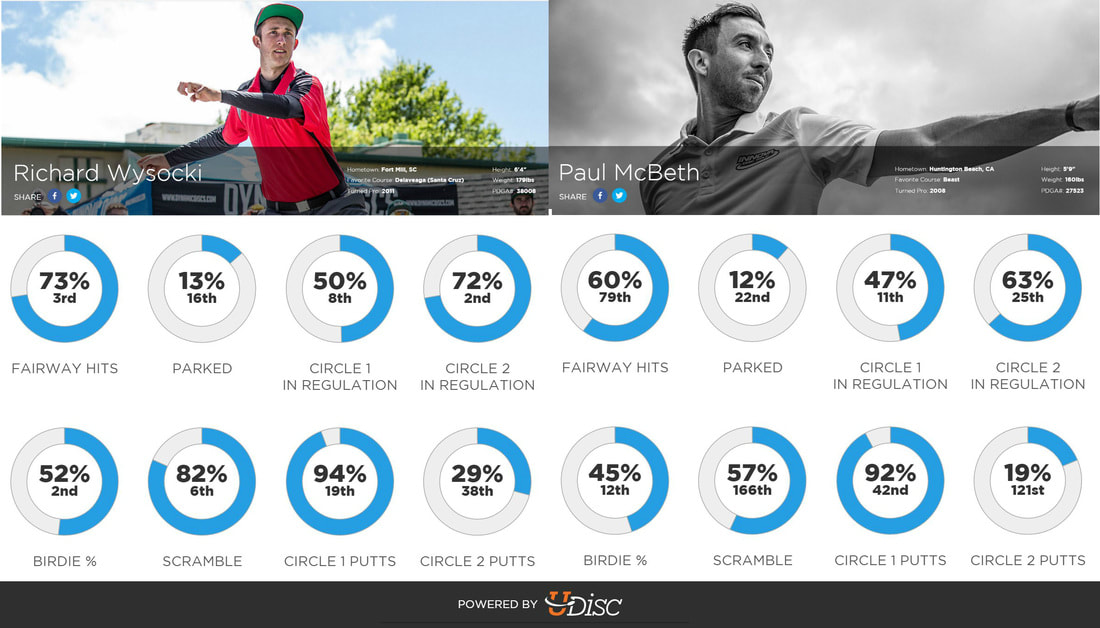 UDisc Stat of the Week

With Pro Worlds going on this week, we figured our stat of the week should be a comparison of the two players who are heavily favored to win. With his win at the Majestic, Ricky Wysocki became the #1 Power Ranked player in the world, eclipsing McBeth who had held the top spot for over three years in a row.
The image above shows the primary statistics for both players after the first three Pro Tour events. In every category, Wysocki performs better. He is top 20 in every statistic except C2 putts, which we all know he can hit when the chips are down. He is top ten in five of the eight statistics, and he is top three in Fairways, C2 in Regulation, and Birdies. All told, his statistics show a player that is firing on all cylinders going into the most coveted title in our sport.

McBeth, on the other hand, has been scrambles and C2 putts, both of which are well outside 100th in the world. It should be noted that this data is from only two events as McBeth missed the Silver Cup, but still, 120 players putting better than the 4X World Champ from C2 is wholly unexpected. Also, McBeth has clearly been struggling when he misses his drive. While his C2 putting is 50% lower than Wysocki’s, his scrambles are the real area of concern, statistically. If Wysocki misfires on his drive, he has an 8 in 10 chance of saving the par. McBeth pars less than 6 in 10.

That is a huge difference and is our UDisc Statistic of the Week: McBeth’s Scramble Percentage: 57%.

If McBeth is going to Fivepeat as World Champion, he needs to recover better than he has done at the first Pro Tour events, and bearing in mind his showing on day one, he has either improved his scrambles, or he is simply not missing on his drives.
​
Watch Pro Worlds and follow this epic battle.