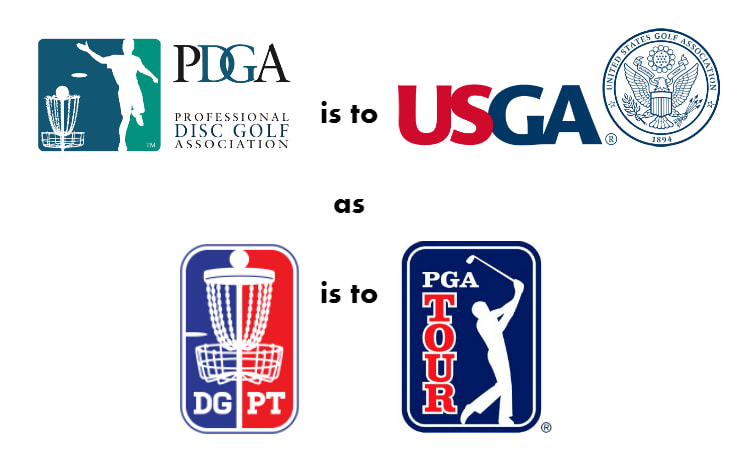 unless positive steps are taken toward working together. This is mostly meant as a shot across the bow of the PDGA.
Note: Discraft’s Green Mountain Championship will remain sanctioned.
Note: Any players that would like a refund due to the unsanctioning of the Tour Championship will receive a full refund no questions asked.
Note: Non sanctioned DGPT events will forward money to a Pro Tour charity effort (instead of paying PDGA sanctioning fees).
Our goal is to work together. The PDGA should treat the Pro side of the sport fairly. Some may view this as divisive. We are sorry that it has come to this.
The Pro Tour is laying the foundation to be disc golf’s PGA Tour in North America. The players and venues will have representation. The spectators will have live coverage, great stats, and an amazing Tour Championship (date and location to be announced in the coming months as details are finalized). The Pro Tour has tried, in good faith, to work with the PDGA on scheduling, co-branding events, and even discipline. The PDGA’s actions have consistently demonstrated that there is no desire to work with the DGPT, which is viewed simply as a series of PDGA events.
We are taking this action to demonstrate that the DGPT is an independent organization. We have put our umbrella around a series of events and are growing the Pro side of the sport in ways the PDGA never has. We have announced the 2017 Pro Tour , which was scheduled with the PDGA and World Tour events in mind.
———-
Working TogetherWhen the Pro Tour and World Tour were announced in the Fall of 2015, Jussi (DGWT), Steve (DGPT) and Brian (PDGA) made it clear that we would all work together regarding scheduling. An initial calendar was worked out between the DGWT and the DGPT and was shared with the PDGA.
Since then, the PDGA has

The PDGA never reached out to the DGPT with proposals on scheduling. It has become clear that “working together” means the PDGA will setup the schedule as it always does, PDGA Majors and NTs first, everyone else next. That is not what the DGPT envisioned when we said “work together”.
———–
No Communication, No Co-Branding

Is this a conspiracy? No. The PDGA staff was instructed to schedule no Pro Tour events as NTs by the PDGA Executive Director. The PDGA Executive Director serves at the pleasure of the Board of Directors (BoD). The BoD is either complicit in or directive of this instruction.
———–
The BoD, the Summit, the brushoff.The DGPT reached out to the PDGA to be a part of the Pro Tour/NT discussion, which was slated for four hours. The DGPT was told that the BoD would prefer to not hear from us nor have us involved in the conversation. This was when it became clear that the Pro Tour was, in the eyes of the PDGA and the BoD, not worthy of being involved in the discussion. Eyes wide open.
———–
The final straw. Bradley Williams’ 18 month suspension .In no way does the DGPT condone the actions of Bradley Williams.
I (Steve Dodge) emailed the Disciplinary Committee the day after the Ledgestone, where Bradley’s infraction occurred: “I want to be available to you all … and I want to work closely together and present a unified front when / if disciplinary actions are taken.” I was never contacted. The PDGA removed a player from the Pro Tour without any inclusion of the DGPT in the process.
I did reach out to the Disciplinary Committee after the fact and it was explained to me that they were talking to me ONLY because I happened to be the TD of an upcoming event that the suspension would affect. As the Director of the Pro Tour, I would not have gotten my call answered. Once again pointing out, the PDGA does not consider the Pro Tour a worthy partner.
So we have one player (Bradley Williams) suspended and two players (Paul McBeth and Cam Todd) who are boycotting PDGA events due to the PDGA disciplinary process. The players have every right to have representation in the Disciplinary process and understand what types of actions warrant what types of punishment.
Being a PDGA event is hurting the DGPT Tour Championship.
———–
Time for the splitIn good conscience, knowing that the goals of the DGPT are to build a professional Pro Tour throughout North America, we cannot continue to pretend to work together with the PDGA. The PDGA has consistently failed to communicate, put roadblocks in our way, refused to have discussions, and has suspended Pro Tour players without consulting the Pro Tour or the players.
Today I have renewed my PDGA membership for 2017. The PDGA is our governing body and does a very good job of defining the rules of the game, creating ratings for events, and executing the PDGA Majors. These are the exact same things that the USGA does for golf. The USGA is a worthwhile and good organization. It does not run and govern the Pro side of the game, except for hosting the US Opens.
The Pro Tour’s goal is to become the PGA Tour of disc golf in North America. The PDGA will continue to be the USGA of disc golf. Arguably, the PDGA never meaningfully supported the Pro side of the sport in the way the Pro Tour (and DGWT) does and will. It is not in the PDGA’s DNA to do this. 98% of its members will never play at this level and it is a member organization.
It is time for the split to happen. And it starts this weekend.
———–
One Parting ThoughtWe would like to work with the PDGA on the Pro side of the sport as a respected partner. In order for this to happen, the BoD needs to direct PDGA HQ to work closely with the DGPT. If this Board is not up to the challenge and if you would like the PDGA and DGPT to work together for the betterment of the sport, then during the next BoD election cycle, the relationship with the DGPT should be a topic of discussion.
We would like to see the following actions taken:

With these simple changes, we will be able to work together going forward and schedule 2018 in a way that is best for the players, the PDGA/DGPT/DGWT, and the spectators. The sport is growing. It is time for our governing body to do so too.