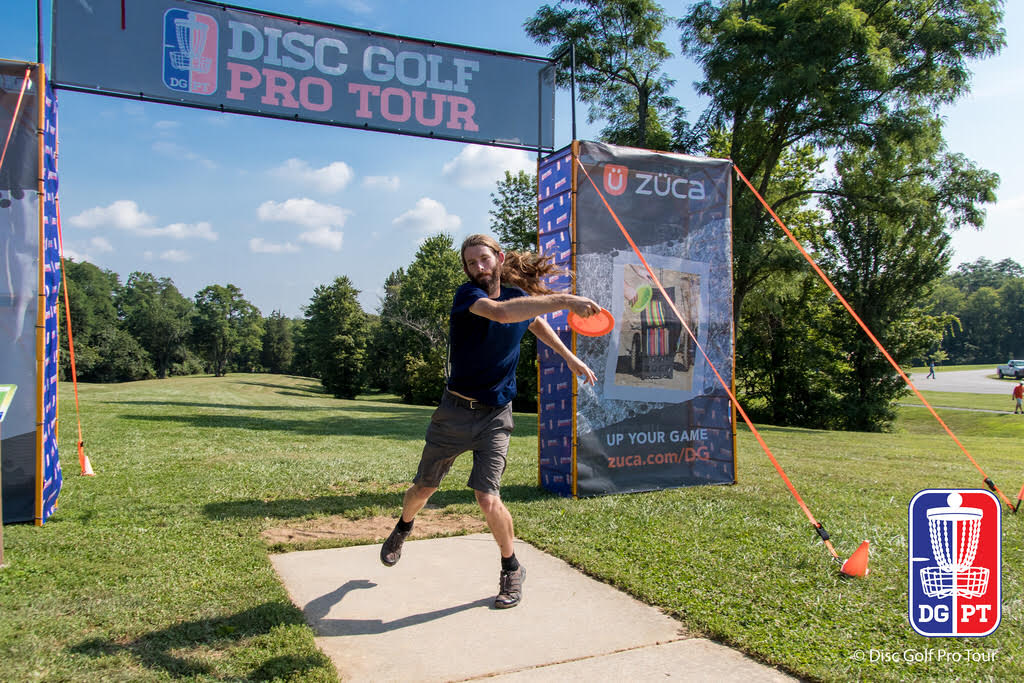 The Pack Converges: MPO Round 1

​ Round one of the Idlewild Open driven by Innova and The Nati , began today and the some of the best disc golfers to play the sport battled through the thick Kentucky
course. In order for any player to be successful at Idlewild, they must have a plan of attack and hit all the lines that their creative minds can devise. Even an inch left or right can mean devastating results, and the course will show its fangs. The event saw a short rain delay, turning pads slippery and allowing upshots to slide instead of holding tight next to the baskets.
Paul McBeth
Four-time World Champion Paul McBeth had a chance this week to gain some precious DGPT points while his rival Ricky Wysocki is taking a break from the event. Paul showed the fans why he is a champion playing a solid round even as he found many of his shots going astray. He resorted to quite a few stand-still flicks when the course or the footing called for the skilled shot. Although he found a way to string many birdies together, Paul was often forced to scramble for par in the unforgiving woods as well as making some sensational shots from inside the green jails that surround the baskets. Paul suffered some very high numbers late in his round carding two bogeys as well as two double-bogeys to end an overall solid day of work. He finished with a one over par score tied with Jeff Vandemark, Peter McBride, and Mike Conlee in 12th place. Perhaps by day two, Paul will dial-in his putts and really drive his score down further.
Jeremy “Big Jerm” Koling
Jeremy Koling, known for his love of tightly wooded courses, put on a tremendous performance early at Idlewild. Big Jerm carded birdies the first four holes in succession. The stat that stood out for Jeremy was his (63%) fairway hits.  On a course like Idlewild, landing in the fairway is not only preferred, it is often a necessity to keep your score low. Jeremy utilized his forehand/backhand style to perfection to cut through most of the fairways. Unfortunately Jeremy ended his round with two double bogeys to finish one under par and landing in eighth place tied with Dustin Keegan, Eric Oakley, and Michael Johansen.
Chris Dickerson

Chris Dickerson stumbled early in his round but came back strong placing seven birdies on his score card and more importantly challenging the top disc golfer for control of the round. At first glance, Chris’ fairway percentage of (47%) would lead you to believe that his day was mostly filled with struggle. If you look deeper into the stats, the combination of (78%) scramble rate and a (90%) circle 1 putting rate drove Chris to the top of the leader board and in prime position for round two. He finished four under par tied for third.
Drew Gibson

Drew Gibson is brimming with talent and although he hasn’t risen to the top of the leaderboards as of late, he is in prime territory to make a move at the Idlewild Open. His card didn’t look much differently than anyone else’s, lots of birdies and a little too many bogeys. That being said, Drew has a real opportunity with all the mediocre scores that surround him to make a move on day two. Drew ended his round with a four under par, tied with Chris Dickerson. Will this be the edge Drew has been waiting for? We will know by the second round.
Nate Perkins

The Texan, Nate Perkins threw out a great first round and for most of the day held off the best disc golfers in the world. How did he do it? His first nine holes were a thing of beauty converting five birdies out of nine holes and continuing his solid play on the back half only carding 2 bogeys for the day. Nate took a bogey on two of his last holes to finish his day with five under par but holding onto a share of the lead with a five under par in a deadlock with Andrew Presnell.
Andrew Presnell

Andrew Presnell battled the winding woods the entire day and was rewarded with the lead finishing the first day at Idlewild. Marking down seven birdies in all, Andrew hit the fairways 74% of the time and scrambling an impressive 75% of the time. But what Andrew did best was doing everything as a whole right. Individually none of his stats were mind-blowing but if you put all the little things together, he showed the fans a very solid round. Andrew ended his day in a tie with Nate Perkins and also shared the hot round of the day with his co-leader.
Honorable mention goes out to Drew Gibson who made an astonishing eagle on hole 11 and if not for some tough holes, probably would be today’s leader, but I guess that could be said about most competitors this day. More strong finishers include Gregg Barsby, James Conrad, and Reid Frescura. They ended their round two under par and in fifth place.
If there is a word that might describe the first round at Idlewild, it would be convergence . Because of the difficulty of the wooded course, the short-lived weather interruption, and the high level of competition, the scores remained relatively close the first day. The lead card for round two at the 2017 Idlewild Open driven by Innova and Idlewild will be Andrew Presnell (-5), Nate Perkins (-5), Drew Gibson (-4), and Chris Dickerson (-4).  Tune in tomorrow for more live coverage and see who can move away from the pack. The weather will improve but will the score? Join us and find out who will rise to the top.