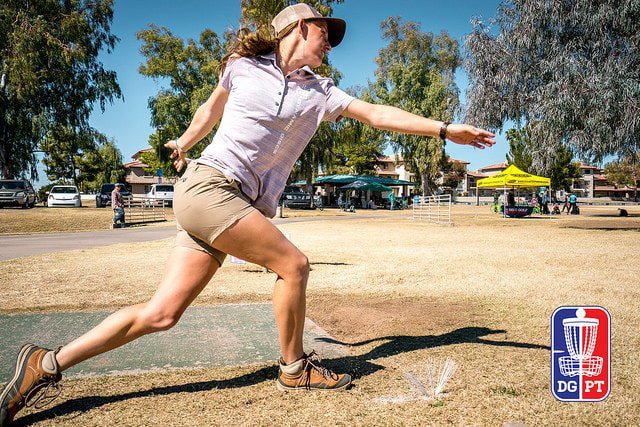 Different year, same story. Paige Pierce dominated the 2017 Disc Golf Pro Tour circuit and is showing no signs of a let up for the 2018 season. After shooting a
six-under par, 50 at Fountain Hill disc golf course, Pierce now holds a seven-stroke lead and will be in control going into the final day of the tournament. Pierce’s tournament total of 14-under par, puts her seven strokes ahead of Jessica Weese and Jennifer Allen who both threw four-under par, 52s and now sit at seven-under for the event. Lisa Fajkus moved up one spot into third place after shooting a five-under par, 51 and is now at five-under for the event.
While Pierce has led from the get-go, her putter has still been a bit off for the entire event. On Friday, Pierce once again struggled out of the gate with her putter. Through the first 13 holes, Pierce’s Circle 1 putting percentage was only 68% and she was unable to knock down any of her three Circle 2 attempts. Sitting one-under par going into hole 14, Pierce needed to make a push to solidify her lead going into the final day. On the 375 foot 14, Pierce put herself at the edge of Circle 2, 60 feet away from the basket. Using her patented jump putt, Pierce canned the 60 footer. That long putt was the momentum she needed to finish her round strong. Pierce birdied the last five holes of the day, making all of her putts within Circle 1 and knocking down a 38 footer on hole 17 to go perfect from Circle 2 as well.

Paige Pierce’s Day Three Scorecard provided by UDiscJessica Weese, Jennifer Allen, and Lisa Fajkus each had solid days of their own in order to capture a lead card spot for the final day. Allen was solid off the tee hitting 78% of fairways en route to her four-under par performance. Weese and Fajkus were less successful off the tee but both put together impressive scrambling performances, scrambling at a rate of 89% and 88% respectively. Fajkus also used a solid, 95% Circle 1 putting percentage to shoot the second best round of the day.
Sarah Hokom, who went into the day in a tie for second, struggled, shooting a 1-over par 57 to find herself at 2-under for the event and in fifth place. She is followed by Catrina Allen (-1), Kona Panis (E), and Madison Walker (+2).
Tomorrow the action wraps up with the finale of the first DGPT event of the season taking place at the Vista Del Camino course. Tune in to UDisc Live for live stats and the Disc Golf Pro Tour for extensive coverage of the final day of The Memorial Championship presented by Discraft.