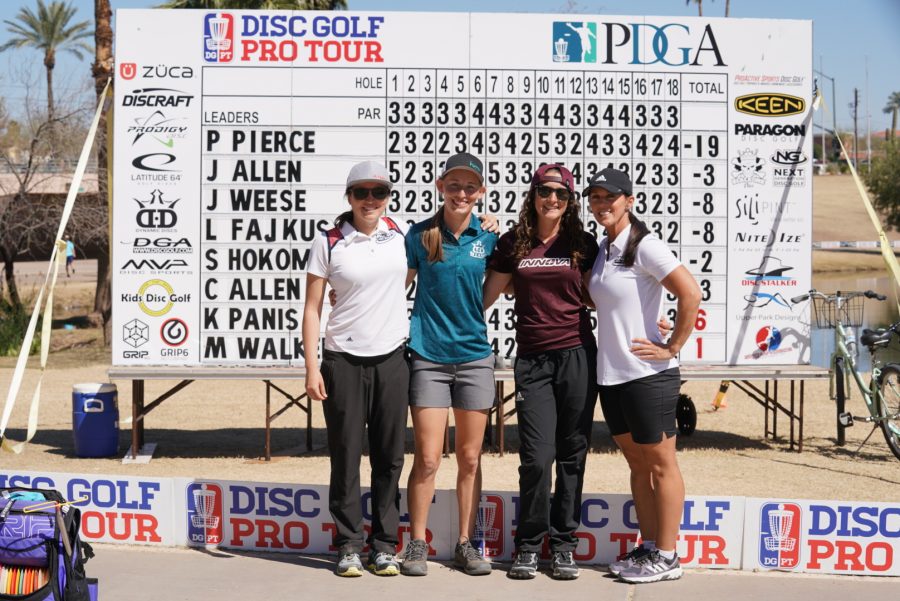 Paige Pierce’s dominance of the FPO division continued on Saturday. The now back-to-back Memorial champion sealed her runaway victory with a five-under
par, 55 at Vista Del Camino to finish 19-under for the event and with an eleven stroke victory. Lisa Fajkus had a late round push to shoot a three-under-par, 57 and tie Jessica Weese for second place. While Catrina Allen bounced back with a two-under par, 58 performance to tie with a struggling Jennifer Allen for the fourth spot.
Going into the day with a seven-stroke lead, Pierce put her foot on the gas pedal early, birding three of the first four holes, to keep herself in the driver’s seat. From there, Pierce cruised to victory, scoring ten birdies in the final round. The victory marks Pierce’s second consecutive Memorial title and she has now won five of the last seven. The win also marks Paige’s fifth straight Disc Golf Pro Tour win dating back to Idlewild last August.
While Pierce was taking her victory lap, Lisa Fajkus and Jessica Weese were battling for the second spot. Weese entered the day with a two-stroke advantage over Farjkus and was able to hold on to that advantage until the 13th. The 405-foot par three proved disastrous for Weese as she took a double bogey, three-putting, to push the second place battle even. The ladies matched each other on the next three holes before Weese was able to capitalize with a 38-foot birdie putt on hole 17. With a one-stroke advantage going into the last hole, Weese put her drive long, past the basket, but within Circle 1. Fajkus, on the other hand, shanked her tee shot short leaving herself with a putt on the edge of Circle 2 in order to put the pressure on Weese. Fajkus canned the long putt to force Jessica to have to make her putt in order to seal outright second place. Weese was unable to convert and the pair ended their battle tied for second place at an event total of eight-under.
Fajkus’s Circle 2 Putt on Hole 18 to Tie for Second Place
Further down the leaderboard, Catrina Allen’s solid two-under-par round allowed her to secure a fourth-place finish after Jennifer Allen struggled to a four-over par round including two double bogies. Sarah Hokom fell one spot into the sixth spot and Madison Walker finished her event with a seventh-place finish.
The Disc Golf Pro Tour will now move to Texas for the Waco Charity Open presented by Dynamic Discs. The three-day tournament will begin Thursday, March 15. Stay tuned to the Disc Golf Pro Tour for all of the exciting disc golf action.