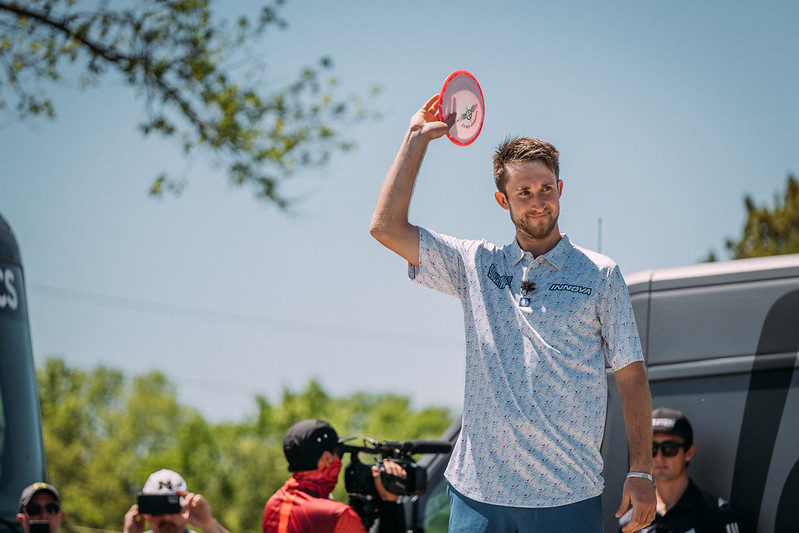 THE CHALLENGE AT GOAT HILL – ROUND TWO RECAP

By David WeaverMay 8, 2021No Comments

Round two at the Challenge at Goat Hill has concluded and with it comes a shakeup in the leaderboard in both the MPO and FPO divisions.

In the Men’s field, Ricky Wysocki pulled away of what started as a three-way tie for the lead to start the day. Wysocki’s round two score of 57 (-12) was good enough to earn the 2x world champion a four stroke lead heading into Sunday’s round.

Wysocki, who sits at the top of the field with a four stroke lead, will look to capture his third DGPT win of the season on Sunday.

Also on Saturday’s lead card and currently sitting in 3rd place was Brodie Smith who shot a respectable score of 62 (-7). While Brodie’s Saturday round wasn’t as impressive as his first, he held the solo lead for the first time in his Pro Tour career which is impressive stuff from the DGPT Sophomore. Smith currently sits only five strokes off the lead and is still averaging 1035 golf over two rounds (31 points over his rating of 1004).

However, what really got players and fans talking on the course Saturday was Anthony Barela’s incredible second round of 54 (-15) which bumped him up to 2nd place after starting the day in the 25th position. Barela’s 1070 rated second round puts him only four strokes out of the lead.

Rounding out the lead card for Sunday’s final round will be California native Cody Kirkland who despite a player rating of 976, has shown that he can hang with the big dogs at the Goat Hill Park course. Kirkland, who boasts one of the lowest PDGA numbers in the field at 28198, took an eight year hiatus from tournament play and has clearly not skipped a beat from his earlier years where he carried a player rating as high as 1016. While relatively unknown on the Disc Golf Pro Tour, we look forward to seeing what Kirkland can do on Sunday’s final round and future DGPT events this season.

In the FPO division, lots of movement took place on the top few cards as predicted with Lisa Fajkus putting together the round of the tournament thus far to catapult her from the bottom of the lead card to the top. Fajkus heads into the final round tied with round one leader Ohn Scoggins who once again made a late push (this time stringing together five birdies to finish) to hold on to the top spot.

Lisa Fajkus’s round two score of 60 (-7) was rated 979 and is the lowest score of the weekend in the FPO division by two strokes.

Scoggins and Fajkus sit five strokes ahead of Ella Hansen and Jessica Weese who both jumped from the second round chase card to the final round lead card after impressive 3 under par (Hansen) and two under par (Weese) rounds.

Round two in the FPO field also saw two eagles from Ella Hansen and Kona Panis on hole sixteen. With several tight battles ahead in round three, the eagleable 16th could prove to be the difference maker for a win or podium position. However, if Fajkus can continue bogey free golf like she played in round two, a late eagle from one of her card mates may not be enough to catch her.

Ohn Scoggins will look to improve on the earlier sections of the course during Sunday’s round. However, if rounds one and two are any prediction of how she will play in the final round, expect to see plenty of birdies coming down the stretch.