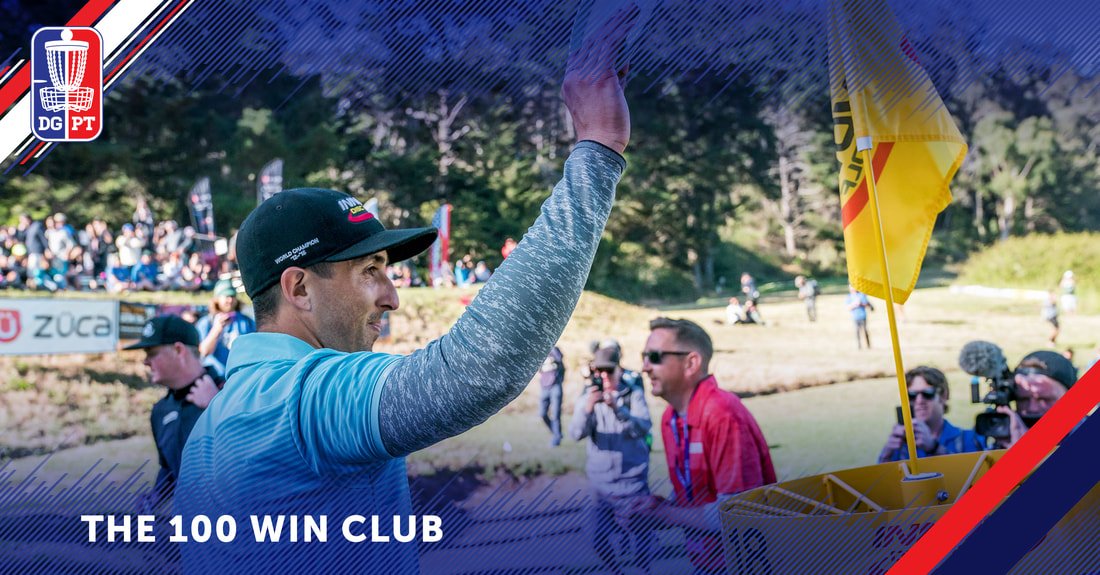 In the past three years, the Disc Golf Pro Tour has sought to expand the Professional side of the sport through a geographically sensible tour with a guaranteed payout. This has
resulted in giving more professional players the ability to tour full time which has resulted in more opportunities for players to win. Admittedly, the Disc Golf Pro Tour is not the sole reason why players are winning more, but we like to believe we have played a small part in the success of our touring Pros.
One of those successes has been the ability for several professional disc golfers to reach the 100 win mark this season. We wanted to take a moment in between Pro Tour stops to highlight the players who have reached 100 Pro Open wins on tour this season and look at who is in line to reach the mark soon.
For perspective, here are the win records of some of our sports greats like Ken Climo (212 Open wins), Barry Schultz (226 wins across multiple divisions), Brian Schweberger (227 wins across multiple divisions), Elaine King (254 wins across multiple divisions), and Juliana Korver (223 wins across multiple divisions). There are not many players who have broken the 100 win club and even fewer who have topped 200. Below are the four touring Pros we know of who passed 100 wins this year.
Paige Pierce
Paige is not the first FPO player to reach the 100 wins mark, however, she joins an elite class of FPO players by taking down her win at the Waco Charity Open in March. Paige is among storied FPO players like Elaine King, Juliana Korver, Valarie Jenkins, Catrina Allen, and Des Reading to name a few. Paige is the only Pro to our knowledge to their 100 th win at a Disc Golf Pro Tour event. That being said, we expect to see more pros notching their 100 th wins at Pro Tour stops.
Cale Leiviska
Cale began preparing for his 100 th win at the end of 2017 but ultimately did not find his 100 th win until early 2018. Cale is known for his near flawless form and infectious smile. He was able to take down the win at the Fade Station Open catapulting him into the 100-win club.
Dave Feldberg
Dave is a player you would expect to have already reached his 100 th win, however, after winning in Georgia this year Dave announced he had reached the 100 th MPO win of his career. With Dave towing the line between Open and Masters he may not be able to reach 100 wins in the M40 division but he definitely has a great shot at it should he keep at it. While his profile reflects 105 career wins, we know a few of those were in the Masters’ division last year. His 100 th career MPO win came at Throwmageddon on May 12, 2018.
Paul McBeth
After a slow start to the season, Paul McBeth was able to take down his 100 th win in style. At the Nick Hyde Memorial , Paul McBeth brought home his 100 th career MPO win. Just like Dave Feldberg, Paul has a few wins outside of the MPO division but notching his 100 th win was a huge accomplishment. With many years left in the tank, it might be possible for Paul to reach 200 MPO wins.
Who to watch…
Ricky Wysocki
Ricky is 3 wins away from his 100 th MPO win. It is very likely that we will see Ricky’s 100 th win this season. Which event do you think will be Ricky’s 100 th win?
Chris Dickerson
Chris has 64 open wins and 11 advanced wins under his belt. He needs 36 more wins to get to that 100-win mark but given his historic start to the season, we should probably expect him to surpass 100 sometime next year.
Eric McCabe
Eric is 18 wins away from the 100 mark. While Eric’s play has slowed down in recent years, should he continue to play 5 or so events each year he could conceivably hit 100 MPO wins before he moves into M40 for good?