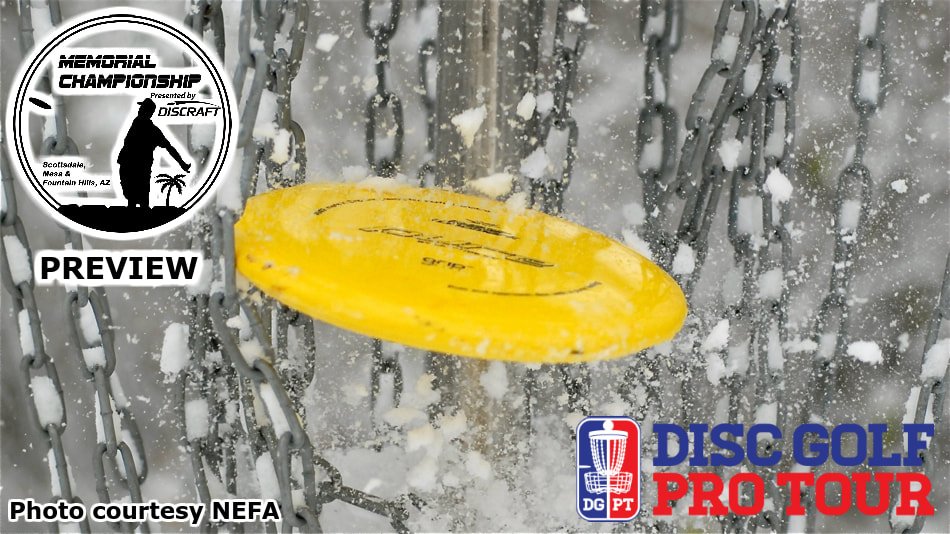 Stop digging out and watch some disc golf

It’s almost March. In New England, playing often involves digging through snow more than it does crushing drives and rattling chains. Winter putting leagues make sure we ​
have ice in our veins for spring, but until then it’s daydreams and frozen rounds to get our fix. The Memorial Championship presented by Discraft is how I know that Disc Golf season has arrived. There is something indescribable about watching the top pros playing the iconic Fountain Hills Course. I am jealous of manicured fairways and greens, the leaf filled trees, and of course the towering fountain at the center of the course. For those of us in the North, watching gets us pumped to play that much more.

The field of players in the MPO and FPO is impressive. Many players will certainly be putting on a show. Paul McBeth is looking to add another win to his long list of showings at this event. Since 2011 he has won the event four times and placed second twice. Wysocki is coming off a huge win in Australia and playing his dependably hot game at the Gentlemen’s Club Challenge as I write. Momentum means a lot in this game and if you’ve ever watched an interview with Ricky you know it’s core to his game – stringing together some of the longest birdie streaks in the game. When it comes down to it though, betting on a defending champion is the easy way out.

MPO – Eagle Time?
For this year’s Men’s Open Division I’ve gotta put my money behind Eagle McMahon. After last year’s incredible showing at the USDGC came crashing down on hole 13, the infamous “888”, Eagle McMahon came into the 2017 season hot. We all saw the dramatic finish of the Aussie Open. Ricky may have pulled off the win but McMahon threw above his rating all four rounds including scraping the clouds with a 1094 Rated second round at 16 under par. Despite what some will say about his age, McMahon has the spark of a champion kindling inside him. I’m expecting to see him on that top card making all the experienced pros go to work if they want to keep up with his energy and clench the victory come Saturday.

FPO – Turn the page on 2016, Paige is back
The FPO division is looking like it could hold the biggest surprises of the weekend. This year we’ll get to see them all unfold thanks to the DGPT’s commitment to airing the FPO lead card, coverage that the Women’s Division needs and deserves. 2016 was the year of Catrina Allen, winning 21 PDGA sanctioned tournaments, but all of the player’s who kept her from an unimaginable perfect season will be at the Memorial Championship next weekend. Most of them are familiar names: Paige Pierce, Sarah Hokom, Valarie Jenkins and Jessica Weese coming off an injury shortened 2016 season. Look out for a name you might not know though, Evelina Salonen from Valkeakoski, Finland is in the states and ready to play this season and don’t let her low 900’s player rating fool you, if there is someone who will deliver an upset it’s her.

For my real prediction though I’m going with Paige Pierce. She won the Aussie Open by a devastating 20 strokes despite having just swapped out every disc in her bag by joining Dynamic Discs. She’s also leading the pack after day one at the Gentlemen’s Challenge. When Pierce is on she tends to stay on, I expect her already strong momentum to carry her through to a dominating season in 2017.