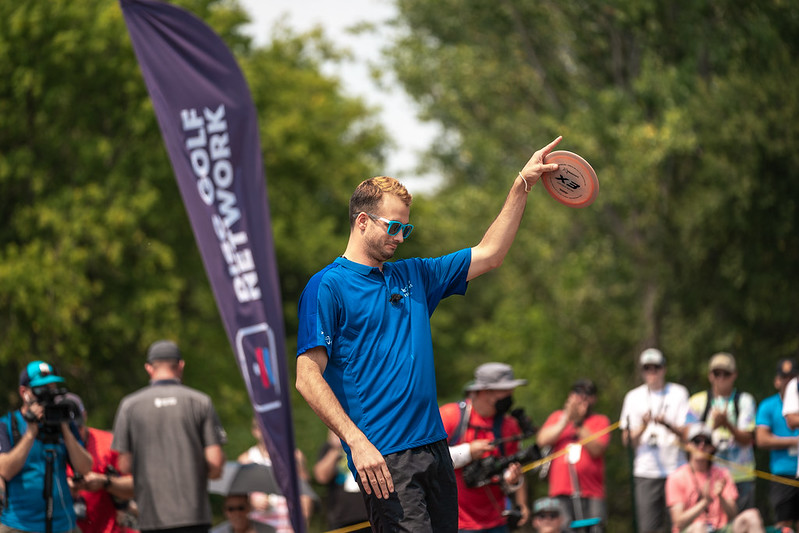 STAFFORD OPEN – ROUND ONE RECAP

By David WeaverAugust 20, 2021No Comments

Play is underway at the Stafford Open in Vorhees, New Jersey as the fields of 80 Men and 20 Women kick off the first Disc golf Pro Tour event at the historic Stafford Woods course. After 18 holes, some familiar faces sit atop the leaderboard but with two rounds left before this year’s Champions are crowned, both titles are still very much up for grabs.

On day one in the MPO division, Matt Orum got off to a very hot start carding birdies on his first five holes. Orum’s solid play never left throughout the round and with near perfect putting, Orum finished with a blazing 1075 rated score of 51 (-13). Right behind Orum sitting in 2nd place is Justin Rosak who despite struggled on hole 7 eventually carding a double-bogey, managed to shoot lights out on the rest of the course and currently sits three strokes behind Orum.

Matt Orum looks to capture his first DGPT event win this weekend. With some strong finishes this season and 20 years of experience, expect to see Matty O in the hunt coming down the stretch.

Not to be outdone by his younger counterparts was last year’s Stafford Open Champion Michael Johansen who shot a bogey-free 55 (-9) to start a hopeful repeat of his 2020 title. “MJ”, as he is affectionately referred to by fans and players alike, did leave a few strokes on the course including a missed putt from circle 1 on the par 4 16th hole. However, two made putts early in the round from deep in circle 2 (49 and 60 feet) certainly helped save Johansen’s round which earns him a spot on the lead card headed into round two.

Michael Johansen’s round one score of 55 is right on pace with where he left off after last years victory which further confirms that MJ is in fact the ageless wonder on tour.

Rounding out the lead card for Saturday will be Chris Villa who matched Johansen’s bogey free 55. Villa and Rosak are two of the local favorites as both players reside in nearby Pennsylvania, roughly an hour from Stafford Woods. Round two should bring lots of excitement and cheering fans as we get one round closer to crowning a 2021 Stafford Open Champion!

In the FPO division, round one brought a back-and-forth battle between Pro Tour regulars Holly Finley and Missy Gannon. Finley’s round got off to a great start with five birdies through her first eleven holes which was by far the best start in the FPO field. Despite a mediocre final stretch consisting of a string of pars and a bogey on the 17th, Holly sits atop the leaderboard with a one stroke lead after her round one score of 60 (-4).

With 49 career wins and a podium finish at this years Silver Series event in Illinois, Holly Finley is inching herself closer and closer to her first DGPT win. Will this be her weekend?

Not to be outdone and finishing just behind Finley is last year’s Champion, Missy Gannon.Unlike Holly,  Missy’s round got off to a slow start with a pair of bogeys and no birdies through her first eight holes. Fortunately for Gannon, birdies on the 9thand 10th turned things around and helped her refocus. With four more birdies earned coming down the stretch, Gannon closed the lead to a single stroke and put herself in a great position heading into Saturday’s round.

Rounding out tomorrows lead card in the FPO division will be local Michelle Frazer and Stacie Rawnsley from Indiana who shot matching 62’s (-2) in round one.

Tune in tomorrow as round two kicks off and players jockey for position on moving day! Live scoring will be available all weekend courtesy of UDisc Live and post production coverage from round 1 will be available starting tomorrow from Gatekeeper Media (MPO) and GK Pro (FPO).