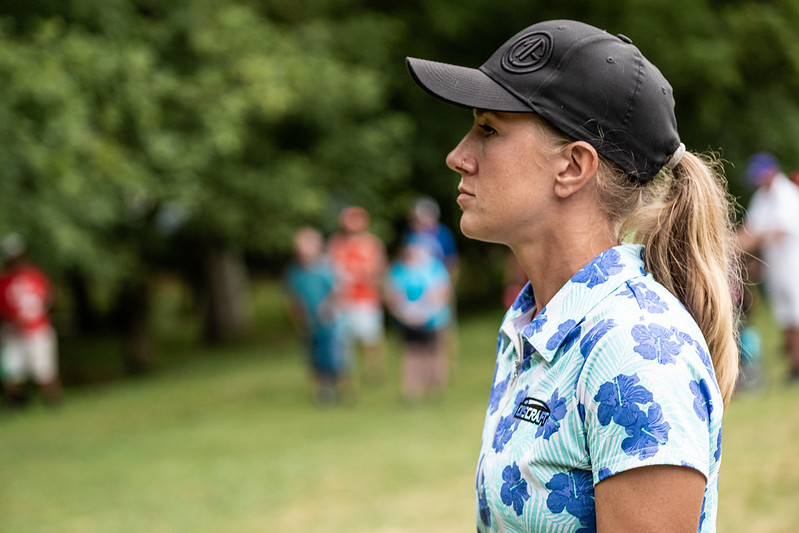 By David WeaverAugust 21, 2021No Comments

Round two is in the books at the Stafford Open and after 36 holes of competition, the play is heating up and the excitement is building as we are one round away from crowning the final Silver Series event champions of the season.

In the MPO division, Matt Orum continued his stellar play shooting a 52 (-12) after his tournament low 51 (-13) on Friday. Orum’s round hit a bit of a speed bump after carding a bogey on hole 6, however Matty O bounced back in true pro level form and birdied the following seven consecutive holes. Orum heads into Sunday’s final round with an impressive five stroke lead.

Tournament leader Matt Orum, who is currently the 8th highest rated player in the world at 1039, looks to capture his first DGPT win of his 20 year PDGA career.

Tied for second after round two are Michael Johansen and Justin Rosak who finished round two with very respectable rounds of 53 (-11) from Johansen and 54 (-10) from Rosak. Both players sit at twenty strokes under par with eighteen holes to play. Not to be left out of the spotlight for the weekend is current 4th place holder Luke Humphries who tied Orum’s round one score of 51 (-13) for the hot round of the weekend. Humphries will earn the final spot on the lead card for Sunday’s round and will have to have more of the same magic he experienced today if he wishes to hold off players like Nathan Queen and Jonathan Nicholson who are tied with him in the 4th place position at fifteen under par.

A special congratulations goes out to Harry Chance (T-12th) for carding the only hole-in-one of the weekend thus far on the 303ft hole 3. Chance, who is currently the second highest rated player in the state of Rhode Island, is competing in his first DGPT event in only his second year as a PDGA member. Congrats on a great shot Harry!

In the FPO division, round one leader Holly Finley struggled on the front nine with two consecutive double bogeys but battled back with a string of birdies on the back. While Finley dropped down to 6th and won’t see the lead card on Sunday, she is still in the hunt for a solid finish if she can put together a strong final round.

Sharing the lead after two rounds are Michelle Frazer and Missy Gannon who are tied at six under par. Frazer had an up and down round with only four pars but was able to card nine birdies throughout her round to tie Holly Finley’s round one score of 60 which is the lowest in the FPO field this weekend. Gannon on the other hand strung together a very impressive round up until hole 16 where she carded a double-bogey six. Despite the tough finish, Gannon shot her second 61 (-3) in a row with one round to play.

Missy Gannon currently sits in 3rd place in the DGPT standings. A Silver Series victory in New Jersey could be a great momentum builder headed into the final few events of the season.

Rounding out Sunday’s lead card in the FPO division will be Stacie Rawnsley and Alex Benson who both finished round two with matching 62’s (-2). Rawnsley sits at four under par (two off the lead) and Benson sits at three under par heading into the final round.

Join us for Sunday’s final round as two Champions will be crowned at the Stafford Open – Driven by Innova, the final DGPT Silver Series event of the season. Live coverage will be available courtesy of UDisc Live and be sure to check out post round coverage of the event on Gatekeeper Media (MPO Coverage) and GK Pro (FPO coverage).