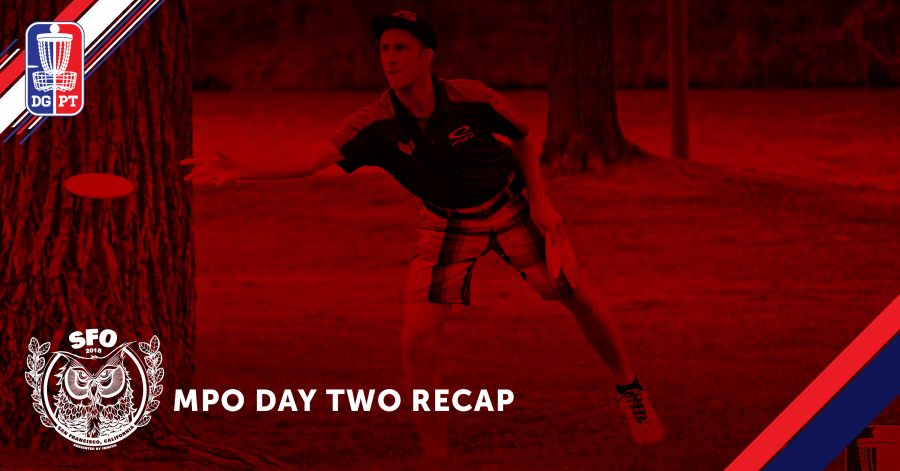 SFO MPO Round 2 Recap: Ricky & Paul Tied at the Top

The second round of the San Francisco Open presented by Innova Discs is in the books. There were plenty of players in the hunt and moving day proved true to
its name today. We will walk through a few notable finishes before hashing out the lead card for tomorrow.
Drew Gibson and Cameron Sheehan were on the same card today, five cards back of lead but based on their play you would have thought they were in the lead. Drew finished -8 on the day. His most impressive shot was an eagle two on hole nine after he put his drive within C1 (hole nine is 747ft). He continued his hot play with another birdie on hole 10. While he missed most of the birdie opportunities on the back nine he was able to stay clean and finish in a tie for the second hottest round, putting him on the lead card tomorrow. Cameron Sheehan’s round featured the same amount of birdies on the back nine as Drew, however, Cameron was able to park both holes 15 and 16 to take back-to-back birdies. Cameron’s front nine was not as hot as Drew’s and thus, he will be following on the chase card tomorrow.
Originally it looked like Eric Oakley and Bradley Williams also finished -8 for the day. However, after reviewing the scorecard, Bradley had added his score incorrectly and once the penalty was assessed Bradley only moved up ten spots to a tie for 19th. Had he not added his score incorrectly he would have moved up nineteen spots into a tie for 10th. Eric did not have any scoring mishaps and moved up fourteen spots into a tie for 6th.
Coming in hot on the third card today was Ricky Wysocki. He started out two for three on the first three holes and did not look back. On a course that requires accuracy off the tee, Ricky was able to card a penalty-free -9. He carded only one bogey on the day, hole 4. After going short off the drive Ricky had to scramble for the bogey. After this, he landed three pars on the 1033ft hole 5 and equally as difficult holes six and seven. While waiting to tee on hole 8, Ricky commented that most of the pros were referring to the hole as the “fidget spinner hole” due to the layout of the sand traps and OB. Ricky was undeterred though, laying up on the drive and then parking his upshot for an easy birdie three. Ricky would continue his hot streak only carding three more pars for the rest of the round. One of which was due to an unfortunate kick on hole 17 when his drive was tracking for the basket. Ricky will look to capitalize on his stellar play tomorrow from the lead card where he is tied with Paul for first place.
On the lead card, there was a game of Paul McBeth vs. the card. Originally, Paul and Eagle were battling it out. Then during the middle of the round, after Eagle hit a rough patch carding bogies on six and eight, Simon and Paul began to battle. However, on the back nine Eagle turned on the heat with five birdies in a row. After missing a birdie putt on eighteen Eagle will be playing on the chase card tomorrow. Simon would stay in the hunt but an unfortunate four-putt on the green of eighteen dropped Simon all the way down to a tie for tenth place. Nate Doss used consistent, bogey-free play to finish -6 and land on the lead card tomorrow.
Make sure you are ready to watch live tomorrow starting at 5:30 pm ET (the Same Day Shot by Shot Women’s Coverage starts at 4:30). It will be a champions card as three of the four players hold all of the World Titles from 2011-2017. Ricky (2016 & 2017), Paul (2012-2015), Drew, and Nate Doss (2011) will be on the card with a host of great players following close behind.