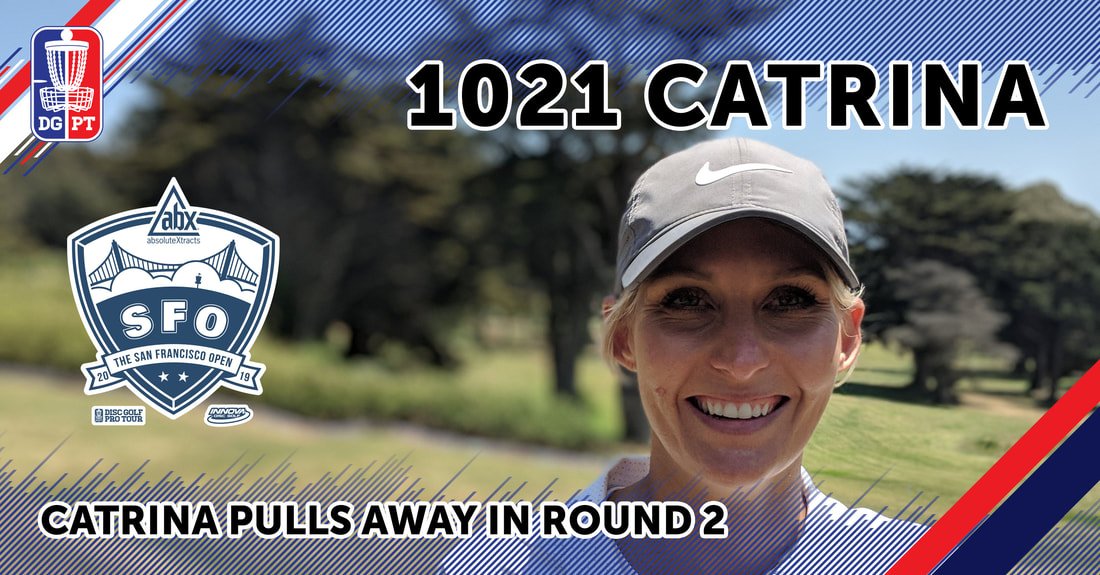 ​In 2018, Sarah Hokom won the San Francisco Open with a total score of 13 under after three rounds. At the 2019 AbosluteXtracts presents the San Francisco Open driven by Innova Catrina is already there after just two rounds of play. Throwing a new course record, 10 under par 56. Nate Doss called it “the round of the 2019 season so far.” No surprise, not far behind Catrina is Paige Pierce at 8 under par, followed by yesterday’s leader, Paige Bjerkaas, at 2 under par. And rounding out the lead card again will be Madison Walker who’s even scored today will keep her at 1 under par. The lead card wasn’t the only shuffle for today though, as there were some big movers further down the leaderboard. Let’s get into it!

No, the yellow didn’t stop working on your monitor…Catrina Allen played Round 2 completely clean.
​If there is one word to describe Catrina Allen today it is confidence . She strode across Gleneagles confident in her abilities and her game plan. She even laid up for par on 13 while holding a snack. She might have been sneaking in a snack, but she was absolutely feasting on birdies. She found her putt and kept her great play from the tees and fairways going too. As the front nine was getting bloody with bogeys and worse for the rest of the lead card Catrina was on the steady train. Although Pierce jumped out to an early lead as Bjerkaas struggled, Allen simply stepped into first, capitalizing on when Pierce made her first mistake on hole six. By the end of the front nine, Catrina was 5 under par and peeling away from the pack. In the new zeitgeist of island holes in the final stretch, Allen shirked trouble and carded yet another birdie – 8 down with 2 to play. 17 may be the easiest hole of the day but hole 18 is the second hardest. Catrina played 17 textbook and stepped up the last tee of the day with the box (which by the way she held for most of the day). Lace the drive, park the upshot, tap in the birdie. That’s how you play one of the hardest holes of the day I guess…well it is when you just shot a course record to leap clear of the pack with one round left. Congrats Catrina, that was an incredible show!

Matching her start in Round 1, Paige Pierce was 3 under through the first 5 holes. And then she had to tango with hole 6 again. In round 1 she had to stomach a double bogey. In round 2 she sadly had a second serving of the same. After Pierce’s second risky shot over OB on hole 6 didn’t pay off she collected herself, finished the hole, and played out a solid round. Honestly, Paige Pierce really only had one bad hole. Sure there were some missed putts and an errant toss here or there, but on the hole, she played great. If it weren’t for Catrina Allen’s 10 under round, she’d be winning. She may be five back from Catrina but at this point, she’s the only one with a chance of catching our leader. If herstory is any indication, Pierce can definitely turn on the boosters and try to chase Allen down…that is if Catrina ever slows down.

Paige Bjerkaas started the day on top of the box, but by hole 2 she was at the back. She would hang out there until Paige Pierce’s double bogey on six earned her those honors. But it wouldn’t be long before she was back there again.  After a 5 over front nine with only pars and bogeys, she did turn things around on the back. Carding three birdies and six pars, Bjerkaas cleaned up some of her mess, finishing the round at 2 over par. She clung to a spot on the lead card with an overall 2 under par for the event. Just check out her scorecard from UDisc:

What goes up must come down…most of the way. After climbing to 5 over par, Bjerkaas whittled things back to a salvageable 2 over on the day.
​Madison Walker must have liked yesterday’s roller coaster rides because she jumped right back in line this morning. Her lowest low (or highest high depending on how you feel about roller coasters I guess…) had to be the triple-bogey 7 on hole 6. But her highest highs have to be the pair of 60′ makes – one for birdie on hole 9 and another on the island 16 to save par after an OB drive – oooo, or he forehand smash on 15 with the dagger-like putt for birdie from circle’s edge! Despite the rough spots she had some highlight plays. If she can just clean those bad decisions and miscues up she could give Bjerkaas a run for the last spot on the podium.

Besides the fact that Catrina Allen has a monopoly on all the throwing stats, there are a few people still sneaking into our stats leaderboards. The only person hitting more fairways than Catrina is last year’s champ, Sarah Hokom who jumped 2 spots to a tie for fifth at 2 over par with Erika Stinchcomb (who leaped four spots today with a 3 under round). Elaine King is the current Scramble Queen. Cleaning up her errors 70% of the time as earned her solo 8th and a spot on the chase card tomorrow. Despite her rocky scores at the beginning of the round, Paige Bjerkaas is currently the best putter at the event, making 80% of her C1X putting. Raining down putts from further though is Rebecca Cox who’s 33% rate from Circle 2 helped her jump 3 spots to solo 7th. Sadly, even with less wind and scoring conditions being ideal (see Catrina Allen…) we didn’t see any aces, eagles or throw-ins today but plenty of holes gave up birdies pars and more from downtown.

Make sure you don’t miss the final round of the 2019 AbsoluteXtracts presents the San Francisco driven by Innova tomorrow at Noon EST. Things could get a little bit wet tomorrow with some chance of rain but I doubt that will get too many people cold with the fire these players are throwing up and down this mountain dream of a course. Until then, get out and enjoy the weather before you tune back in for the MPO live at 6:30 EST.

This article was written by Staff Writer & Editor Zach Podhorzer.