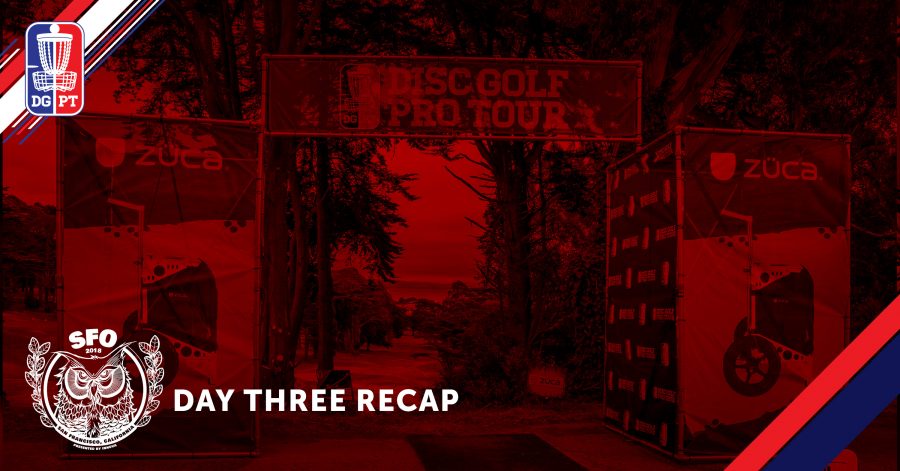 SAN FRANCISCO– Sometimes you know right away when something is going to be special. That was this weekend’s San Francisco Open. From the start to today’s exciting
finish, the field enjoyed a spectacular event. Gleneagles Golf Course proved itself a worthy adversary to all who partook in competition. Despite the most well-informed predictions and assumptions, the course had its way with several who were expected to outperform its meandering fairways, technical OB, and trepidatious greens. Prior to the event, Tournament Director Sean Jack expected the MPO champion to win with a -21 total event score. At the conclusion of the event, it seems only that prediction nearly came true, as the winning event score totaled -19.
Sarah Hokom was perhaps the surprising storyline of the weekend. In an event where Paige Pierce was expected to again outshine her peers, Hokom simply ran away with the win. She displayed serious improvement in her backhand form this weekend, utilizing it not only on the approach but off the tee, most notably on hole two. As for pure distance shots, the flex forehand served her well all across the course. Staying in the fairway was the name of her game from the start, and it blossomed into a bogey-free round two, shooting a hot -7. Undoubtedly the primary momentum shift for Hokom at the very first SFO was her 347-foot skip ace on hole three on moving day. Taking a page (pun absolutely intended) out of Pierce’s tournament handbook, it certainly helped her dominate early and often in the fashion of the women’s four-time World Champion. Following her bogey-free run of 18 on Saturday, she finished -3 today, just two strokes off the hot round of -5, shot by Catrina Allen. Hokom managed an 85% fairway hit rate and converted 78% of her circle 1 putts. Out of five scramble attempts, only two were successful, but that didn’t slow her charge to victory. The eight-stroke margin was more than enough to earn Hokom her first national tour win of the 2018 season, as well as unseat the undefeated Paige Pierce. However, she is still well on her way to a fifth world title.
It’s possible that no one wanted this more than Paul McBeth. The four-time World Champion has had a lackluster start to his 2018 season, even failing to finish top-10 at Jonesboro and the Glass Blown Open. This weekend at the San Francisco Open, McBeth returned to his true form. By the end of round one, he easily earned himself a spot on the lead card. Late Saturday, he entered the clubhouse tied for the lead with Ricky Wysocki. The two World Champions traded the lead through the front nine until McBeth drained a 74-foot eagle putt on hole nine. Wysocki made one final charge at McBeth, attempting to remain clear of the gaining Eagle McMahon on the chase card. A double bogey on hole 15’s elevated pin would be Wysocki’s undoing, however, and ended all hopes of a win.
“It was just mistake-free golf,” said McBeth to the Disc Golf Pro Tour’s very own Terry Miller. He attributed his -6 round finish and -19 event finish to playing to his strengths, playing cleanly in the strong westerly wind rolling in off the Pacific, and picking up birdies on the back half of the course where he knew they were ripe from the tree. While Wysocki seemed to cave to the pressure coming into hole 15, McBeth remained cool and collected. Translated into numerological terms, that confidence helped him convert 94% of circle 1 putts, a 74% fairway hit rate, a 74-foot jump-putt eagle, as mentioned before, and five birdies on the day. Time will tell if he can keep this performance level up, but a quick peek at his Instagram shows just how hard at work the newlywed is every day. With wife Hannah at his side offering 100% uncompromising support, this looks to be only the beginning for McBeth this year.
As for the other champion of the weekend, the course itself bared its teeth to all who challenged it and was certainly unforgiving for some. If the preview event in April was the benchmark, this weekend’s field certainly came to understand the level of difficulty and general hype regarding its formidable layout. In the final round alone, the average score in the MPO field was 4.89 strokes over par, a true testament to the championship-level design quality. Only four holes averaged below their par in the final round. Hole 4 is a 507-foot par 3, featuring a low-ceiling fairway and a well-guarded green. Half the field escaped with bogeys, while the remainder carded pars or double bogeys. The lack of birdies in the final round attributed it to the toughest hole to par for the day, scoring an average 3.75 strokes.
That wasn’t the only hole catching out some of the best players in the event, however. Hole 8 is 642 feet and features an elevated pin, very technical OB shaped like a boomerang, hazard bunkers, OB golf green, and an uphill grade the entire length of the fairway. It was the site of Drew Gibson’s second round nightmare double-bogey rollaway fiasco. In today’s final round, three-timer Nate Doss fell victim to its clutches, carding a double bogey, which essentially ended aspirations of a top-5 finish. While the hole ended up averaging right in the middle at 9th most difficult to par, it forces competitors to get creative, commit to their lines and hit the landing zones with pinpoint accuracy.
Sometimes you know right away when something is going to be special. This was but the very first San Francisco Open, and it only took one week to establish itself as a premier event in the Disc Golf Pro Tour. Next year, TD Sean Jack and his team will be hard at work to best their efforts from this year. In California, the Eden of disc golf, it’s almost certain that this tournament is very much a classic in the making.
Make sure you are ready for the fifth stop on the Pro Tour The Utah Open presented by Prodigy June 22-24th.