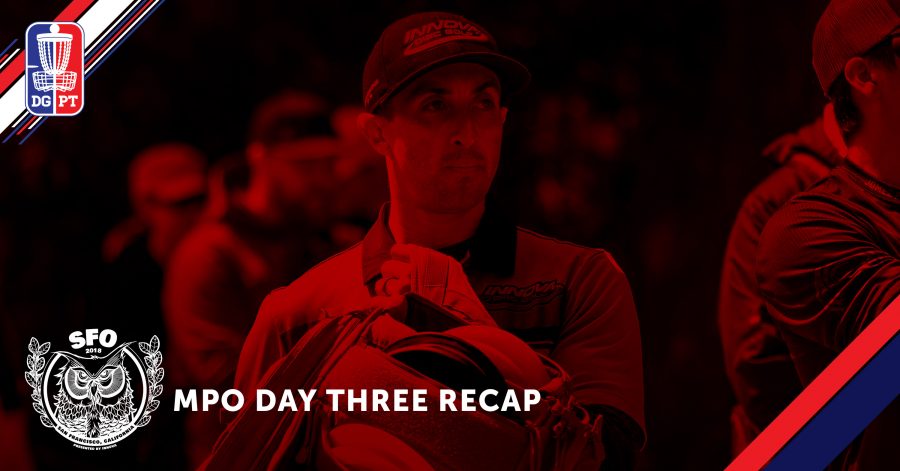 SFO Day 3 MPO Recap: The Battle of the Bay

It doesn’t feel like 2018 does it?
The 90’s were almost three decades ago. Music lovers prefer

vinyl over digital. And the San Francisco Open came down to two players: Paul McBeth and Ricky Wysocki.

If someone told you that this tournament took place in 2016, right after the “ putt heard round the world” , you’d believe them. This tournament was an epic battle of concentration, guts, and will-power. It led to…SPOILER ALERT…Paul McBeth taking home the first ever San Francisco Open title, shooting a 19 under par.
McBeth’s First 2018 PT Title
Through the first 10 holes, it was anyone’s game. Even though Paul and Ricky were clearly in first and second they (and others) were within striking distance.
As other players struggled against the wind taking a bogey here and missing a putt there, Paul and Ricky advanced. Slowly, Paul and Ricky separated themselves from the field.
Through hole 11 it was a one-stroke race, the two trading strokes back and forth. One would take the lead, then the other would battle back, drain a huge putt, and take over. After a few tough breaks for Wysocki, Paul found himself up by three strokes. The win for Paul came on hole 15 when, Wysocki, trailing by three strokes, four-putted and McBeth took the easy par. After the win at Nick Hyde , a fiery round at Delaveaga Golf course, and a commanding win at the SFO, it seems that Paul has rebounded from a tough spring.
Lookout the McBeast is loose!
Standout Performances
It was Grady Shue who came in shooting the hot round at eight under par; and incredible display considering the conditions. What is more impressive is that Shue played the final round bogey free!
Paul was followed closely by Eagle McMahon at -17, Ricky Wysocki at -16, and Simon Lizotte and Drew Gibson tying for fourth place 15 under par.
Rounding out the top 10 was Garrett Gurthie and Greg Basrsby shooting 14 under. Josh Anthon took eighth at -13, and there was a tie at -12 for ninth place between Eric Oakley and Jeremy Koling.
Who Won: the Players or the Course?
We saw calm San Francisco conditions for the first two rounds. But when it came to Sunday afternoon mother nature decided to battle the players just as hard as they were fighting the course. Winds were gusting the whole round, misplacing drives and toying with putts.
Of the front nine holes, Gleneagles only permitted two holes, one and nine, to be played under par, at 3.99 and 3.69 respectively according to stats provided by Udisc . The most difficult hole of the day was the par four 1033 foot hole five that averaged 0.83 strokes over par. It is safe to say that this is now the signature hole at Gleneagles. With tough holes littering the course, there were still birdie opportunities for the entire field. Hole 16 was an island hole at only 285 feet. But it seems most of the field missed their chance, as the hole averaged 0.23 strokes over par.
When it comes to the course as a whole it is hard to know who won. Many players in the MPO field are local pros and have lower ratings than we typically see at a Pro Tour event. The course played almost five over par, making it a difficult but worthy course for professional disc golfers.
The Pro Tour returns June 22-24th at the Utah Open presented by Prodigy Disc. Get ready to tune in and watch!