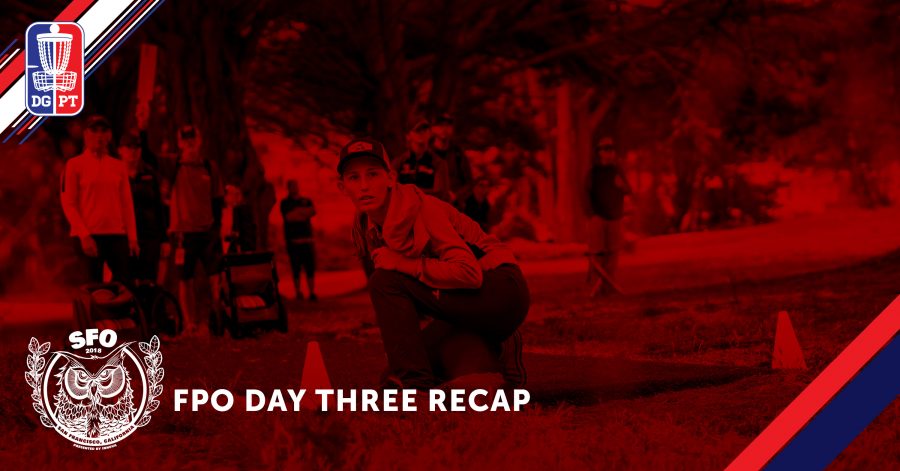 It’s the final round for the FPO division at the inaugural San Francisco Open Disc Golf Pro Tour Event driven by Innova Champion Discs.  The Gleneagles disc
golf course at Mclaren Park has proven to be a well designed, championship caliber course. Over the past two-days, it has provided an open canvas for the FPO players to get creative with their lines and shot selections, which has provided some exciting action leading into the final round.  Sarah Hokom’s sidearm dominant throwing style appears to be serving her well, as she takes a 6-stroke lead over the field heading into today’s play. However, she will have to stay focused and play smart, as the undefeated Paige Pierce will be coming after her, along with a hard-charging pack of elite FPO players looking for their first win of the 2018 DGPT season.
The lead card for today’s final round action features the sports top-rated players, including Sarah Hokom (-10) leading off the box, with Paige Pierce and Jessica Weese, tied for 2nd at (-4), and Catrina Allen rounding out the 4th spot at even par.  The chase card includes Valarie Jenkins also at even par, with Lisa Fajkus and Madison Walker slightly trailing at (+1), and Ellen Widboom (+6) who jumped 5-spots after the 2nd round.
The weather was picture perfect as the lead card stepped-up to the 1st tee at the Gleneagles course to start their rounds.  Unfortunately, Paige Pierce showed early signs of pressure, as she uncharacteristically threw her 1st shot OB on the 668-foot Hole #1.  She would go onto double-bogey the hole, quickly losing more ground to Hokom; who took full advantage of the 1st hole by carding a birdie 3 and extending her lead by 7-strokes. Always the competitor, Paige Pierce appeared to shake-off the early-round jitters, and recovered with a solid birdy on Hole #2, and leading-off the box for Hole #3.  However, Pierce continued to try and find her game on the front 9 as she went on to double-bogey Hole #6 and then carding a string of birdies on holes #7 thru #9. Jessica Weese continued to play for pars on the early holes, which included some “tree-love” on Hole #4, where she careened her putt off a tree next to the basket for a dramatic par-save .
Paige’s struggles on the front 9 seemed to fuel Sara’s focus and determination, as she made the turn at 3-down, with 4 birdies and only 1 bogey, increasing her tournament lead (-13), and now 9-strokes ahead of Pierce and Jessica Weese who were now tied for 2nd moving into the final 9-holes of the tournament.  Other notables include Catrina Allen who had a solid round going with 3-birdies and one bogey on the front 9, and holding down solo 4th place, as Valarie Jenkins played to even par through 9-holes.
On the back 9, Catrina Allen continued to reel in the players from the top-card with 3-birdies on Holes #10 thru #13, to vault herself into a tie for 2nd place with Paige Pierce going into the final 2-holes of the tournament.  Hole #15 saw a near Ace from Paige Pierce as she fought to keep herself from losing any more ground to Catrina. They both ended up going birdie and bogey on the final 2 holes, which solidified their tie for 2nd overall for the tournament.  Jessica Weese played steady golf through the day at even par, with 1-birdy and 1-bogey on her card, for a 4th place finish overall. Deeper in the field, Paige Bjerkaas’ round was heating up, as she carded 5 birdies and only 1 bogey thru 15-holes, and climbed up the leaderboard 5-spots into a tie for 8th place with Kona Star Panis heading into the final 3-holes.  Unfortunately, Bjerkaas bogeyed 2 of the final 3-holes but still finished 4 spots better than where she started final round and gained some confidence and valuable experience heading into the 5th DGPT event, when it returns to Mulligan’s Creekside Disc Golf Course in Utah June 22-24.
Although she showed some nerves on the back 9 with 3-bogies and 3-birdies, Sarah Hokom’s lead proved to be insurmountable, as she takes the honor of winning the overall, and puts a stop to Paige Pierce’s undefeated record.  Be sure to visit Udisc Live for all the final scores and highlights from today’s event.
Make sure you watch the exciting shot-by-shot coverage of the final FPO round from @throwsfo at 4:30 pm ET today! http://www.dgpt.com/watch/live