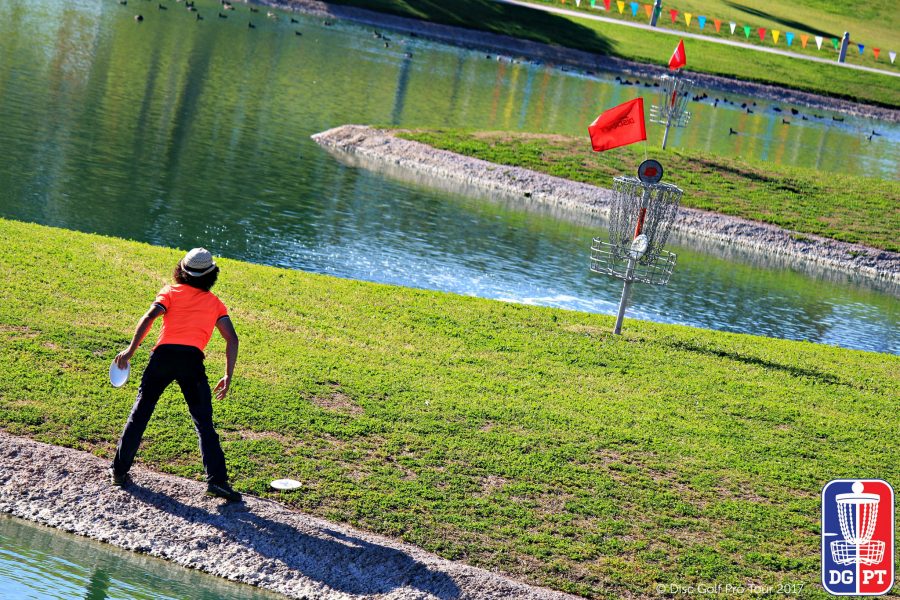 Round 2 Wrap up: Some old, some new

We’re halfway through the Memorial Championship presented by Discraft. In the FPO, Paige Pierce maintains her 5 stroke lead. Upset in the MPO top spots finds Ricky ​
Wysocki in first, with the rest of tomorrow’s lead card only two or three strokes behind. After tight competition at the Fountain Hills course, Fiesta Lake was primed to be the separator. Day three may be moving day, but day two has given us our first look at who came ready to chase the title.
In the top levels of the FPO division, slowing down is not an option for anyone. Pierce may have the lead but she’s not the only one present to have won this tournament before. Catrina Allen, tied for fourth at 5 over par, is looking to score her second win at this event. Valarie Jenkins, in seventh place at 6 over par, is looking to clench an impressive fourth victory here. The question will be if any of them can catch Pierce, who continues her charge forward towards a stunning fifth win at this event. For those of you who don’t know, even with her four wins here in Arizona, Pierce has a few wins to go before she has won it more than anyone else. Juliana Korver, who you can still catch at the occasional tournament, has won the Memorial Championship an astonishing six times. Read full coverage of the FPO round two here .
Before moving on to the drama of the MPO, I have to give some quick praise to Lisa Fajkus. You might remember her from yesterday’s article, she is playing her first Memorial Championship presented by Discraft and is now tied for fourth place after a solid round, even to par. Her second round was a sound improvement over her first. Fajkus is positioning herself for the upset if she can maintain her momentum. Also, a little perspective for you, Madison Walker not only threw the hot round for the FPO division today, her 3 under par, 53, also beat out well over half of the MPO field – I bet their wishing they could throw like a girl.
As players filtered into the clubhouse on day one, the MPO competition was wound tight. By this morning, the competition was ready to explode. Read up on the details of the MPO second round here . It is not a big surprise to see the top ten today. Most of the names are recognizable as some of the best players in the game and they played fittingly. The top four rounds of the day thrown by Wysocki and McBeth at 12 under par and Rico and Feldberg at 11 under par all finished clean – not a single bogey between the four of them.
Today’s spotlight goes to a name on the leaderboard you might not know. Surrounded by 1000+ rated players, Gavin Rathbun, in his Disc Golf Pro Tour debut, is playing well above his 980 rating. Allow me to fill you in. Rathbun holds the 2016 United States Amateur Disc Golf Championship title. A title he had to beat a nail biting three-way tie to clench. As should be expected of anyone who wins their division, Rathbun has stepped up to the MPO and is proving that he belongs amidst champions. He threw an entirely clean second round, 9 under par, and currently has the best scramble rating of any player at the tournament – a perfect 100%. If he can keep his head on straight it will literally pay off – you’re playing for cash now Gavin.
That wraps up our coverage of day two of the Memorial Championship Presented by Discraft. We’re headed to Scottsdale, Arizona for day three at Vista Del Camino Park. That southwest weather looks like it should hold with a forecast of sunny in the 70’s and only a hint of wind. Both the FPO and the MPO titles are up for grabs still but anyone who wants a chance will have to get past Pierce or Wysocki, both are undefeated in 2017.