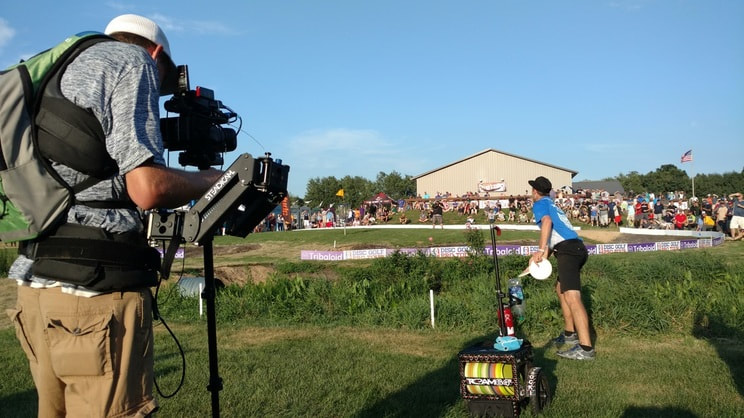 Exciting finishes are par for the course at The Majestic ; at stake was the ample $30,185 pro purse. This year’s 30th annual Majestic, the third stop on the Disc Golf Pro Tour , lived up to high expectations as Ricky Wysocki #38008 stormed back to win it over Nate Sexton #18824 on the sixth playoff hole at the big beautiful Blue Ribbon Pines DGC north of Minneapolis, Minnesota.
Tied going into the last hole , a 310-foot island hole surrounded by a moat, both Ricky and Nate birdied to force a playoff. This last hole in regulation would become the second playoff hole after hole 1. Ricky and Nate would keep playing these two holes until we had a winner. The format was convenient for the gallery of some 250 spectators as they could plant themselves and watch the action unfold hole by hole.

With moderate winds under sunny skies, the pair traded birdies on the third playoff hole. Then the action shifted to the tricky island hole. Ricky, who had honors throughout the playoff, fired a low laser backhand that skipped left and OB. Nate’s drive landed safely on the island, a mere 15 feet away. It looked like it was all over, but the gods of disc golf decided to play some nasty tricks on Nate. First, Ricky made his 20-footer to save par; now Nate had only to slam the door with a routine 15-footer. After twirling his putter backward a few times as he always does he unexpectedly doinked it, causing a collective gallery gasp. So, it was on to hole 1 again which they both birdied, then back to the island hole for the denouement.

This time Ricky’s drive fell well short of the island while Nate’s sailed OB into the moat. Ricky had to putt from the drop zone and his 45-foot uphill putt was dead center in the chains for yet another circle three. Nate marked his lie inbounds from where it went OB, 18 feet away. He needed this one to stay alive. Again he twirled his putter backward and again he missed, this time chaining out, forced to take a bogey. It was Ricky’s awesome putt as much as Nate’s gack that provided the winning margin; when it was over the crowd had been treated to yet more Majestic magic.

Sarah Hokom throwing her patented forehand drive at Blue Ribbon Pines.Â The women put on quite a show too. It looked like a playoff betweenÂ Sarah Hokom #34563 and Catrina Allen #44184 was in the offing. But on a quite quirky ruling, Catrina Allen took a rare two-shot penalty from the previous round when she went OB into a pond and did not throw from the drop zone, instead marking her lie from where it went into the water. Under normal rulesÂ Catrina would have played it correctly, but under these tournament rules, she was supposed to play from the drop zone. The two-throw penalty left her two back and handed the victory to Sarah. It was a weird ending to what had been a great battle all weekend by these two world champion women.