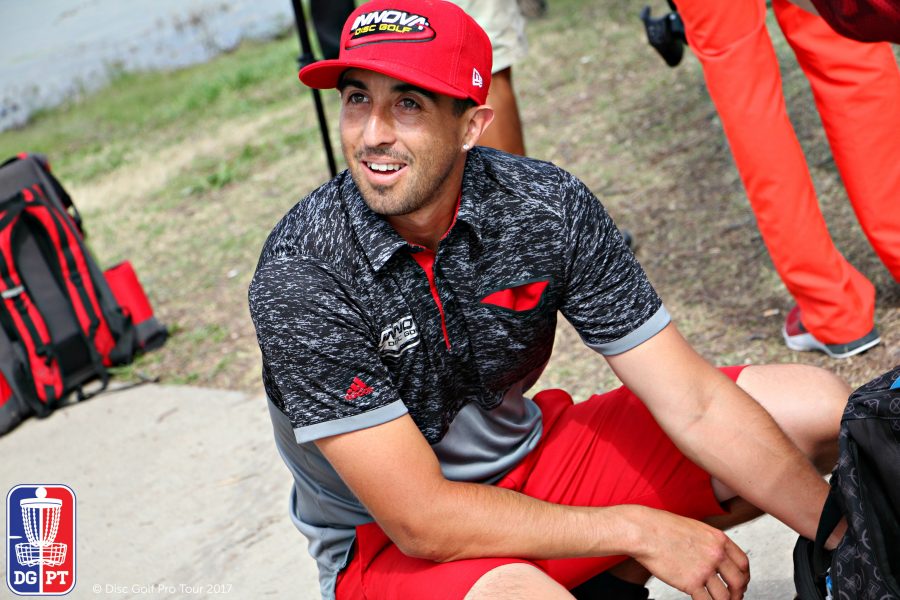 The feature card for the second day of the Nick Hyde Memorial powered by Innova and Hyzerbomb had all the firepower that one card could handle. Peter McBride with ​
a two stroke lead intended to hold off some of the best disc golfers in the business, namely Nate Sexton, Paul McBeth, and Simon Lizotte. Although the skies were clear, the Texas wind made itself know as the flags waved aggressively on many holes.
The first round of any tournament will see some good starts along with some not so great ones, but the middle round is affectionately referred to as “moving day”.  Any player who has aspirations of reaching the top of the leaderboard by the day’s end must correct any mistakes in their game if they hope to put themselves in a competitive position for the final round. The biggest leap on the leaderboard today was Drew Gibson who vaulted 22 spots and placed 11th along side Matt Bell, both Shooting twelve under par for the day.
The “Outlaw” Peter McBride began his second day throwing just barely out of bounds on the very first hole, a start Peter surely did not anticipate. But with some resilience, Peter bounced back with four birdies in a row. Although Peter kept pace with the card most of the day, his lines weren’t as crisp as they were the first day forcing him to execute longer up shots as well as longer putts. Some tough breaks caused his total score to slide to only 20 under par and into a tie for sixth place with Austin Turner.
The Harry (scary) Myers Park course tested the patience of Nate Sexton early in his round. Trees seemed to reach out and grab his discs at every turn, making potentially great shots into teachable moments of self discipline. He didn’t stray from his normal game plan of attempting aggressive shots, but he also took what the course gave him. Showcasing his better judgment, Nate intelligently threw out when he found himself in thick areas, saving some strokes in the process. Down the stretch, Nate battled himself as much as he did the course, but with determination he clawed his way back toward the top and achieved a total of 21 under par to tie with Nikko Locastro for fourth place.
Simon Lizotte represented the polar opposite of his card-mate Nate Sexton today. If Nate showed restraint as he found trouble, then Simon’s strategy could only be described as fearless. When his disc made its way into the rough he followed it up with a bold but risky recovery, and more times than not was rewarded for his audacity. Perhaps it the impetuous nature of youth, but Simon doesn’t know when to say when, giving in to the urge to find that risky sky high line that no one else can see. Carrying one of the highest putting stats in the field, Simon can afford to take some added risk with the assurance that his putter will likely save the day. He made an amazing run of eleven birdies and one eagle. With some spectacular play Simon ended his day at 24 under par for the tournament, tied for second with Ricky Wysocki.
With all the grit of a champion, Ricky Wysocki never let off the gas, catching up with the leaders early and keeping pace the entire round. Always within striking distance, he scrambled on the longer, tough holes but kept his drives close to the baskets on the shorter par threes. His recipe for success on day two was his mixture of fairway accuracy and his scrambles when he had to deliver. He finished at 24 under par in a second place tie with Simon Lizotte and most importantly made it onto the final lead card.
Paul McBeth came ready to play on day two. He made a statement by parking hole one and placed pressure directly upon the shoulders of Peter McBride. With talent like Paul McBeth’s, there is more than one way to score low during a round. Today, Paul showed the fans he could do it with extraordinary accuracy off the tee, hitting 85% of the fairways and saving himself from long putt attempts. Unfortunately, when he was called upon to make some putts, well within his range, the putts didn’t seem to fall. The uncharacteristic lapse in putting prowess kept him always a step behind Simon until he parked hole #14 to card a birdie just as Simon found his first bogey. This swing in score rewarded Paul with a tie for first place on the leaderboard and after that he had the demeanor of a man with the round under control, even visibly sharing a smile with the crowd. Paul knows how to win and knows how to take advantage of any mistake by a rival. He shot the hot round of the day with a 13 under par but it was his experience that made all the difference on the board as he finished with a total 26 under par and sole possession of first place going into the final round.
The second day of the Nick Hyde Memorial powered by Innova and Hyzerbomb delivered the fiercest battles between the titans of disc golf. The feature card for the third and final day will be Paul McBeth (-26), Ricky Wysocki (-24), Simon Lizotte (-24), and Nikko Locastro (-21)  Can Simon Make it two years in a row? Will Paul’s two stroke lead be enough to earn a victory? The only way to find out is to watch tomorrow’s exciting conclusion. Coverage will begin at 5pm eastern.