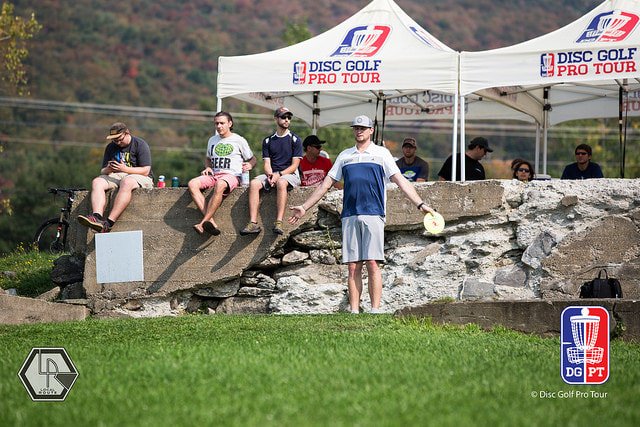 Jeremy “Big Jerm” Koling, we all know him because he’s always there. He’s been in the top ten at 5 out of 8 of the Disc Golf Pro Tour stops he’s played this year, he’s become
the voice of disc golf alongside Nate Sexton with their “Big Sexy” commentary, and chances are if there’s an ace he’s on the card. Seriously though, he was there for Simon’s Ace on hole 15 at the Jonesboro Open and he was there for Ricky’s win sealing Ace on hole 18 at the Utah Open. On top of that Jerm’s had his own season with plenty of heat.
Take the Waco Annual Charity Open Presented by Dynamic Discs, where James Conrad caught Jerm from the chase card to force a dramatic sudden death playoff. Koling shot a 12 under (1048 rated), but that wasn’t quite enough to keep Conrad at bay, throwing a 1071 rated 15 under par to force the tie. In the end, it came down to one hole, 558 feet, OB all along both sides. Conrad went big, crushing a huge flexing backhand hoping for a look at eagle on a hole that had only given up 3 of them all week. Conrad’s drive just barely rolled out of bounds, permitting Koling the high percentage forehand hyzer to the middle of the fairway. An easy lay up to the basket and Jerm was looking at a drop in birdie unless James could convert the penalty three. Conrad’s drive didn’t cross the OB line that far from the basket, and with a jump putt from beyond circle two he caught plenty of chain on the left side only to splash out, bringing the play offs to a heart pounding close.
The important thing to take away from these moments is that Jerm performs under fire. From putting the pressure on Paul McBeth to force a playoff at the 2015 Memorial to this year at WACO with Conrad, when Big Jerm needs to step up he rises to the occasion. In the Disc Golf Pro Tour, playing under pressure is the name of the game, and Koling has given himself the best possible shot he can. By performing so well at so many tournaments he has collected enough points to earn a bye to the semi-finals. We won’t know who he’s playing against until Round 1 and the quarter finals are over. Win that card and he earns himself a chance at the finals and, if he can execute, the Disc Golf Pro Tour title and a healthy wad of cash.
Make sure you don’t miss a minute of the action, it is sure to be a battle of the best. Live coverage of the DGPT Tour Championship will follow the schedule below, times listed are EDT: