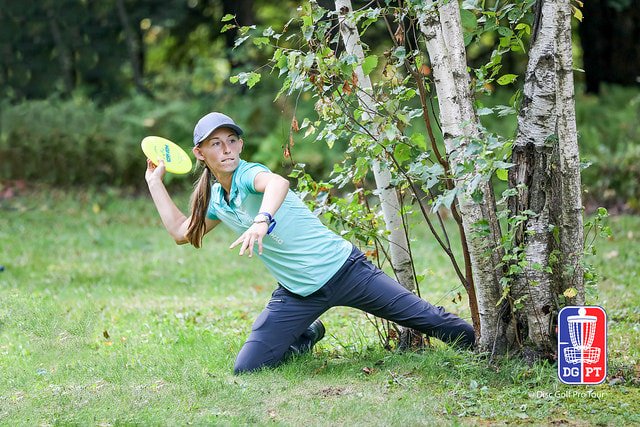 The Memorial, Jonesboro, WACO, Idlewild, Vibram, GMC, the list goes on and on. Paige Pierce won six of the eight DGPT stops she played this year. Those are six of a total
19 first place finishes in her 2017 season. She is the 2017 USWDG Champion. She’s the 2017 Worlds champion. At the beginning of the year, Pierce was ready and it seemed likely she would have another dominating season. A handful of months later, that prediction has come true. Paige, no matter how you count it, is the undisputed best FPO player of 2017. If the pile of trophies and victory points isn’t enough, just take a look at her DGPT stats:

Pierce is leading the field in three stats and holding down second place in three more. Her lowest ranking is for her circle 1 putts, but she handily makes up for that from the tee – leading the group in hitting both circle 1 and circle 2 in regulation.  Add to that a fantastic scramble rating of 63% and you have the makings of a champion. Pierce is also one of the only FPO players to card an eagle this season and she did it on the infamous hole 18 at Maple Hill, throwing her drive just short of the OB before the island green and finding the chains from almost 50 ft out.
Pierce has had some closer events this year, but often she won by a handful of throws or more. She is throwing so far now it is giving her a distinct advantage on particular layouts. Though not so much an advantage to explain the huge scoring gaps she has created at several tournaments this year. The reality is that Paige Pierce is playing the best disc golf she ever has and she doesn’t seem to be giving any indication that she is slowing down soon. I personally won’t be surprised to see her rating pass 1000 in the next few years. Congratulations on an absolutely fantastic season Paige, can’t wait to see you tackle the Tour Championship in just a few weeks!
Live coverage start times are listed below in EDT:

Don’t miss the action as our epic 2017 Disc Golf Pro Tour Season comes to a dramatic close in Jacksonville, FL in just one week. Until then stay tuned for more player profiles and tournament preview pieces and fill that bracket out!