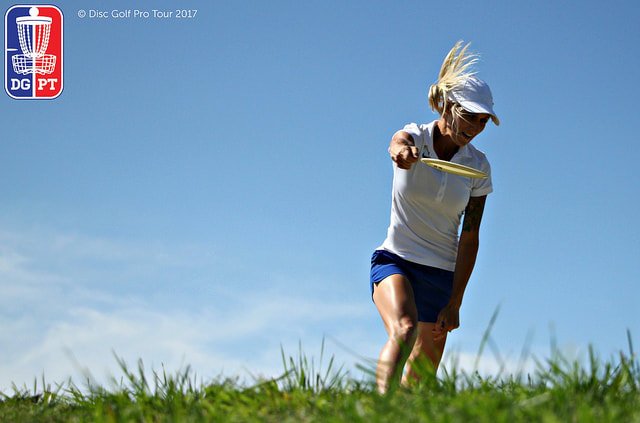 In 2016 Catrina Allen took first place in the DGPT finals and second place in DGPT points. She was the player to beat in the FPO division. 2017 has been a different story. She has
finished third place in DGPT points and has struggled at times on the course. However, if the past two weeks are any indication, Catrina may be in line to capitalize on semi-finals bye and bring home a second DGPT championship win.
Catrina’s stellar 2016
In 2016 the Pro Tour had five stops. Catrina played four of the five stops bringing home two first place and two second place finishes. In 2016 Catrina showed courses like those played at the GMC and Ledgestone are her bread and butter. This should play a large factor when considering how Catrina will perform in the Championship this week. The USA Links course at New World sets up very similar to the Fox Run and Sunset Hills courses so Catrina should feel comfortable during the semi-finals round on Saturday.
Catrina’s 2017: Not up to par
After Catrina’s 2016 finish, it’s clear her 2017 performance was not up to her usual competition level. However, many would be happy to finish where Catrina did. In fact, Catrina never finished below 6th place in a tournament. Catrina performed well enough at the eight tour stops she attended to have a 44 point lead over Jessica Weese when securing her semi-finals bye. However, compared to last season – Catrina struggled. Across eight events Catrina landed only one first place and one second place finish.
The hardest part for Catrina seemed to be to capitalize in the places where she performed well last year. While 2016 gives the impression that Catrina should have been comfortable with courses like Fox Run and Sunset Hills this year, in 2017 she carded her worst finishes at these two events (6th at both). This leads to a discussion on what Catrina can do to capitalize on her current momentum from her first place finish at the Hall of Fame Classic.
How can Catrina capitalize this weekend?
In her first place finish this year, she tied with Sarah Hokom due to inclement weather on the final day of the Nick Hyde. In her second place finish this year she chased down Jessica Weese which ended in a play-off. Catrina was able to build a lead early this past week at the Hall of Fame classic. This will be a key for her success in the semi-finals and finals this weekend.
In the semi-finals round Catrina will be playing against the player who had the most Pro Tour points from the best six quarterfinals scores and the person with the 6th most Pro Tour points. It seems very likely Catrina will be playing her semi-finals round with Jessica Weese and one other FPO player. The third player on their card will be one of three players: Pixie Cannon, Nicole Dionisio, or Erika Stinchcomb.
To make it to the final round Catrina will need to either win her card or shoot the hottest round outside of the top three. Catrina has shown this weekend she has the skills and mindset to shoot a hot round. Her recent resurgence will breath life into the FPO competition and make for an exciting finish to the FPO division of the Pro Tour.
Make sure you’re ready to watch live coverage of the Pro Tour this week. Live coverage of the DGPT Tour Championship schedule starts at noon everyday this week (times listed are EDT):