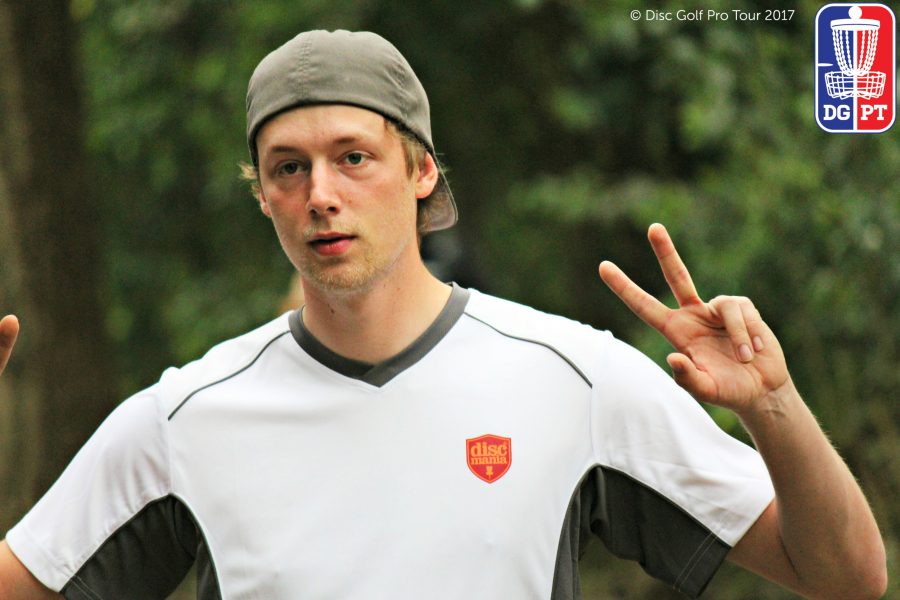 The Nick Hyde Memorial powered by Innova and Hyzerbomb will be held on the Harry Myers Park in Rockwall, Texas created by renowned course designer, John ​
Houck. This venue has far more risk/reward choices to make than other courses on the Disc Golf Pro Tour so far this season. If players want to gain an edge on the field, they must dig deep into their bag of tricks to showcase their creativity. Competitors quite often will be expected to hit lines with only a minimal view of the baskets, while attempting to navigate through lush, but treacherous, scenery. On the Harry Myers course, finding that perfect line to the target is more than half the battle, and choosing wrong can easily turn a casual birdie into a scrambling bogey.
The third stop of the Disc Golf Pro Tour will draw our top competitors back to state of Texas. One player that has been on a career high is James “Smooth” Conrad. Narrowly finishing second to Jeremy Koling in Waco, and this week finishing second to Simon Lizotte at The Open at Temple, James has emerged as a force on the tour and ready to take down a victory this week. Returning with him is his smooth, straight drives that gives him the advantage of navigating through the daunting wooded holes. His pin-point accuracy along with the wave of confidence that currently carries him, might be the next chapter to the Cinderella story that has sparked our imaginations.
Another returning player to the Nick Hyde Memorial powered by Innova and Hyzerbomb is Nate Sexton. One year ago, Nate battled to a three-way tie with Paul McBeth and Simon Lizotte. Although he came up short in a playoff, Nate showed his prowess on the course right to the finish. His reputation as a smart and sometimes conservative player will serve him well on this course. I asked him if the Harry Myers course plays to his strengths and he commented that, “Yes, it has a lot of variety and I feel that I am a well-rounded player.” There isn’t much doubt that his game is as solid as it has ever been. The question is whether he will take those aggressive shots when the moment arises. Nate Sexton has all the tools to take down a win this week in Texas and expectant fans are ready to root him to a victory.
Taking a break from the second stop of the Disc Golf Pro Tour, Paul McBeth is back this week to fight for a win. Narrowly losing to Simon Lizotte here in the 2016 playoff, Paul has proven he has the ability to carve up the course and execute, not only the tight wooded holes, but the longer distance shots as well. It can be argued by some that only a few bad breaks were all that kept him from his usual easy victory last year, but many things change in a year. Will this be Paul McBeth’s year to take down the Nick Hyde Memorial powered by Innova and Hyzerbomb?
Last April, Simon Lizotte battled through this event and pulled out a well-deserved victory among the toughest field in the sport. In less than a year, Simon has rebounded from a major knee surgery and still early in the season has claimed a victory at The Open at Temple. Simon assured me that his knee is feeling great, “If it wasn’t I wouldn’t be playing.” It is that kind of prudence that reveals his growing maturity physically and mentally. If he continues with his great play this season, he is poised to dominate the tour. Simon’s strength is his ability to see impossible lines and actually hit them!  Without a doubt, his knack for creativity could be the defining skill that gives Simon the edge to go over top of the same trees that most other players will be forced to squeeze through. I asked Simon what are the trickiest elements that you can encounter at the Harry Myers Park course in Rockwall, Texas and he admitted, “probably the wind and the mud on the tee pads.” Simon Lizotte has taken a victory here and has the confidence to make it two in a row. But can he fend off players like Jeremy Koling, Ricky Wysocki,  and Eagle McMahon?
The Nick Hyde Memorial powered by Innova and Hyzerbomb for the 2017 season promises to showcase the best disc golfers in the world battling to take home a victory on the third stop on The Disc Golf Pro Tour. Don’t miss a minute of the action as tournament coverage begins Friday March 31st.