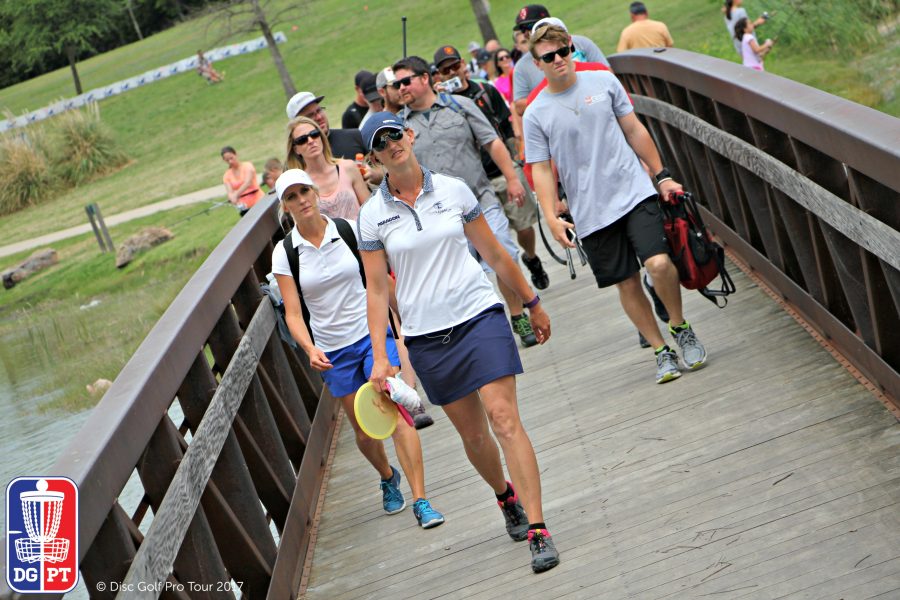 Good morning faithful Disc Golf Pro Tour Fans. We have arrived at the final day of the Nick Hyde Memorial Powered by Innova and Hyzerbomb. If you missed our coverage ​
of yesterday’s play here is a quick recap. In the FPO division, Catrina Allen has caught and tied Sarah Hokom for the lead. One stroke behind them is Paige Pierce. In the MPO division things are heating up. In first is Paul McBeth, trailed by Simon Lizotte and Ricky Wysocki tied in second, and Nikko Locastro.
The third stop of the Disc Golf Pro Tour FPO division is playing out quite differently than the previous two. Pierce had never let another player within five strokes on any day of the Memorial or WACO tournaments, tomorrow she will start in an unfamiliar situation for 2017 – one stroke behind Catrina Allen and Sarah Hokom who are currently Tied for first. Hokom and Pierce both slowed down in the second round making the real story Catrina Allen’s top round to catch them. As is often required to catch a leader, Catrina threw the hot round for the week thus far at a four under par, 60. When the leader you’re trying to catch is carding bogeys, a players ability to scramble is essential. Catrina may not have thrown quite as many birdies as Pierce or Hokom have so far but she only carded one bogey during the second round thanks to an impressive 93% success rate on scrambles for par. Read the full story of the dramatic finish to the round here as we get ready for the final day of the Nick Hyde Memorial Powered by Innova and Hyzerbomb.
In the MPO division there are some familiar names on the top of the leader board. 4 of the top 6 highest rated players at the event comprise the lead card for the final day and Jerry Roth, our MPO Staff Writer, will tell you the details on all of their rounds here . I don’t know if you heard but, Paul McBeth plays disc golf professionally. Shooting 13 under par both rounds, McBeth has played ten above his own 1052 rating two days in a row. Leaving the rest of the pros asking, how do you catch a leader that is consistently throwing above his own rating when he’s the top rated pro in the game? Lizotte, Wysocki and Locastro will bring a unique strategy today as they work to catch McBeth. Will Lizotte’s world distance record throwing power give him the eagle looks he needs? Can Wysocki’s almost robotic consistency off the tee pad put him in “Ricky Range” (AKA circle 2) for the game changing putt? Will Locastro break through and bring home a victory?
We won’t be treated to the same beautiful weather today as we got the last two days. Thunderstorms should start rolling through the course in the morning and continue into the early afternoon. We’ll keep you updated on social media if any of our plans change. Otherwise, catch up with us as usual around 5PM as the top pros battle to separate themselves from the competition and claim victory at the third stop of the Disc Golf Pro Tour, the Nick Hyde Memorial Powered by Innova and Hyzerbomb.