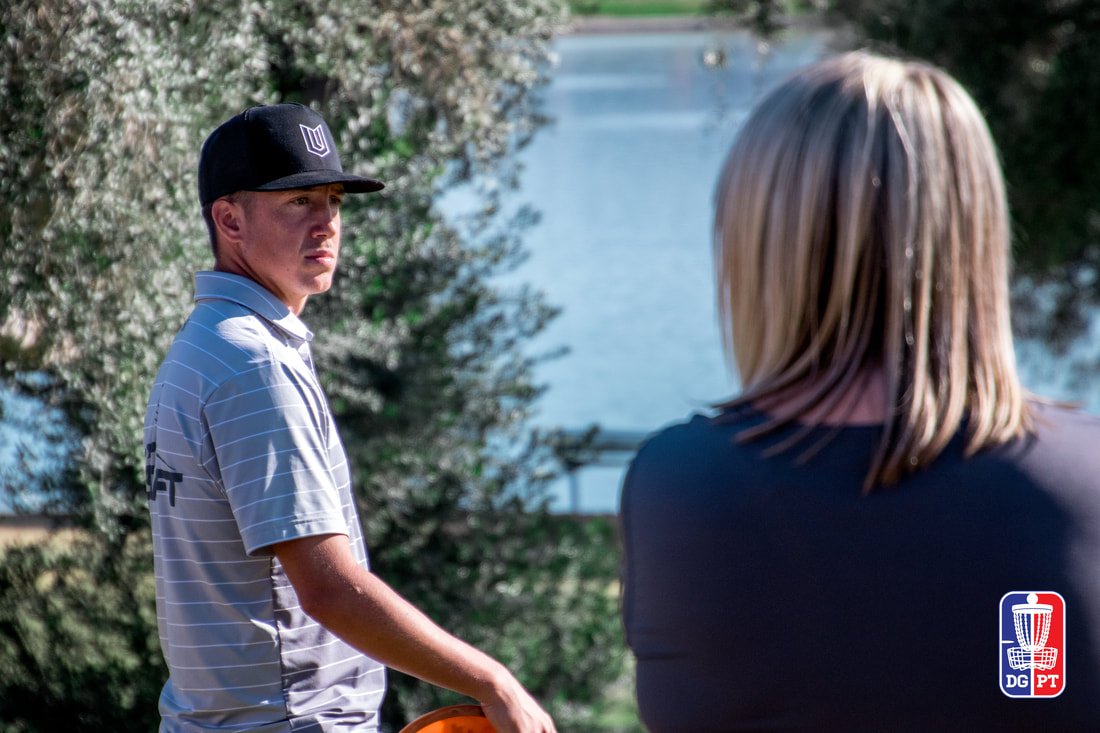 The Play It Again Sports Jonesboro Open presented by Prodiscus has wrapped up day one, and the scoring conditions could not have been better. After practice days that featured 30+ MPH winds, today it was 70 degrees with a slight breeze, and it could not have been a better day to kick off the event.

The first hot round in the clubhouse came from Emerson Keith. Emerson is a player who people are starting to know on the circuit and a player that you should know. Fans in Texas know who Emerson is and they know the quiet confidence he plays with that helps propel him to the top of the leaderboard like finished with early today. Emerson carded eight birdies in a row from hole three until hole ten. He started the streak with a throw-in from circle two and landed another circle two-putt on hole nine to keep his birdie streak alive.  Emerson kept a 100% scramble rate which allowed him to finish with a -12 on the round.

Coming in quickly after Emerson was Paul Ulibarri. His round did not start the same as Emerson’s though. Paul two-putted hole one from circle two to take his par to start the round. Paul did not begin his birdie streak until the 630ft Par 4 Hole Four. He was able to land his second throw within circle one for an easy birdie putt to start his push to the top of the leaderboard. Paul’s additional success to propel him up to Emerson’s -12 finish came on the back nine where he landed half of his birdies and scrambled on 17 after going OB to save his par. The most impressive part of Uli’s round was his finish where he carded the birdie three on the 818 ft ending hole. His first drive made it down the fairway and around the corner putting him about 350ft out from the basket. He pured the line and landed within circle one for the easy three. Uli had the following to say about the round, “It was a really clean round, UDisc has a tracker for the most bogey-free rounds, and that is all I was thinking about today. I got lucky in the middle with a few shots that filtered OB, but I was able to make it up on the green and stay bogey free.”

Local boy Kevin Jones was the one who stole the show today. He landed on the live card coverage as the event choice, and he came to play. After struggling on the first two holes of the course he landed a jump-putt to save par on hole two from just inside circle two, and he turned on the heat from there.  He landed six of seven circle two putts to keep him in the hunt. Had he not struggled inside circle one today (he was only 67% inside circle one) he would have a commanding lead on the field. In regards to his putting, Kevin said: “after missing three putts inside the circle today it’s clear I need to take a moment to shake off the nerves and focus; I may even switch things up and go with a spin putt tomorrow to see if that works.” Going into tomorrow, Kevin said he is honored to be on the lead card, and I am looking forward to the opportunity to play in front of the home crowd.  As it sits, Kevin finishes one throw back from Paul Ulibarri and Emerson Keith going into round two.

As we look to round two at the Play It Again Sports Jonesboro Open presented by Prodiscus we will see that Garrett Gurthie will round out the lead card tomorrow tied with Kevin Jones at -11. Tomorrow the story will be the weather. Last year on Saturday we had snow during the FPO round; this year it looks like the story will be rain. Watch the weather, and we will plan to be live at 4:30 PM ET assuming there are no delays.